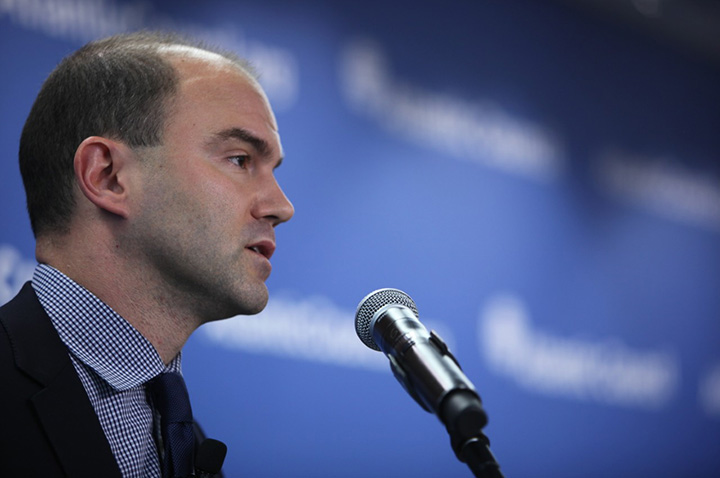 A key presidential adviser said the Obama administration is committed to its nuclear deal with Iran, despite heavy criticism from congressional Republicans and GOP presidential candidate Donald Trump, because abandoning the deal would allow Teheran to restart its nuclear weapons program while alienating key allies.

Ben Rhodes, deputy national security adviser for strategic communications, said in a response to an audience question at the Atlantic Council that ripping up the deal, as Trump said he could do, “doesn’t seem much of a wise thing to do” and “would precipitate a crisis” in the Middle East immediately upon him taking office. Rhodes rhetorically asked the audience, “you’d be doing that for what purpose?”

In his remarks at the Washington think tank, he said that “Iran has fulfilled its requirement” to dismantle its weapons program. “The international community is in a far stronger position” to monitor any attempt to break out of the agreement.

In return, the U.S. is committed to upholding the its end of the deal, he said. In answer to an audience question, Rhodes said that included lifting sanctions covering civil aviation. Boeing is in talks with Iran over the sale of 100 commercial airliners, and though the administration supports following through on lifting the sanctions “we generally don’t … become a public advocate for one American company” during international sales talks.

Rhodes said that the Iranian nuclear deal was “the top foreign policy objective” when President Barack Obama took office in 2009. The administration’s position going into negotiations was that “we would do the nuclear deal” even if the regime didn’t change.

“We have enormous differences with Iran” despite the nuclear agreement, and in reaching the accord “we didn’t give up anything.”

Rhodes said the administration’s policy on Syria is to bring all involved parties to the table to resolve the civil war. “It doesn’t mean we are agreeing with their policy” in supporting Assad, Rhodes said, but everyone agrees the war cannot end militarily – “ the question is, on whose terms” will it end diplomatically, he said.

Although Iran is “bleeding resources” in the continued fighting, Rhodes said he “wouldn’t want to read the tea leaves yet” that the Iranians would stop supporting Assad.

As for reaching the nuclear agreement, Rhodes said Obama had emphasized pursuing diplomatic efforts without pre-conditions with Teheran even before he took office. That “put the onus on the Iranian government” to begin negotiations, but it took years to achieve meaningful talks. When nothing happened on that front, the administration “pivoted to pressure” by imposing tough sanctions on Iran’s oil and banking sectors. “Sanctions were a means to an end, not an end in itself” that found support among U.S. allies and the United Nations.

Rhodes traced the turning point in the nuclear talks to the election of Hassan Rouhani as president of Iran in 2013. The new Iranian approach showed the “possibilities and limits” of negotiations.

Because the talks leading to the deal were so long and intense, Rhodes said there is now a certain level of trust between the two nations that allowed the freeing of five American prisoners held by Iran and 10 American sailors who were detained after their vessel strayed off course into Iranian waters.

“All these issues we were able to communicate with Iran,” even though the two do not maintain formal diplomatic relations, Rhodes said.
“Engagement creates opportunities … to solve the next problem.”

He added that “Iran is not a monolith” of hardliners. “The United States must find ways to engage the Iranian people” educationally and culturally to “leave a doorway open to the future.”