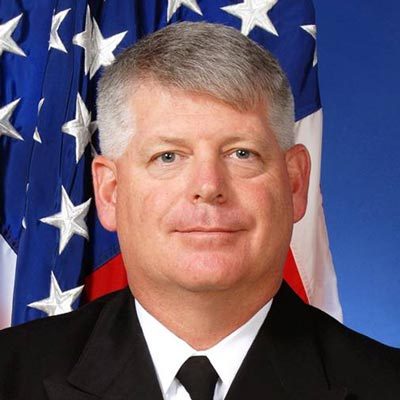 This post has been updated with additional statements from Chief of Naval Operations Adm. John Richardson and Secretary of the Navy Ray Mabus.

A senior Navy supply officer intends to plead guilty to one federal count of making a false statement as part of the ongoing and sweeping bribery and corruption investigation into the Glenn Defense Marine Asia group, the officer told USNI News in a phone interview on Thursday.

Rear Adm. Robert Gilbeau told USNI News he intended to plead guilty on one count of making a false official statement to investigators but not to any bribery or corruption counts related to the so-called “Fat Leonard” investigation.

“Through the course of this investigation – for many reasons I can’t get into – I did in fact make a false statement. And in this unfortunate circumstance, I’m the one that needs to be responsible for my actions, so I will be pleading to making a false statement,” Gilbeau said.
“I’m proud of my 37 years of naval service. I believe in holding people accountable.”

When asked what specifically he may have lied about to investigators, Gilbeau said, “I can’t comment on specifics.”

A Navy spokeswoman told USNI News the service had been informed, “that an active-duty flag officer has agreed to enter a plea of guilty to charges in connection with the ongoing investigation into Glenn Defense Marine Asia (GDMA) and its former President and Chief Executive Officer, Mr. Leonard G. Francis.”

On Thursday afternoon, Chief of Naval Operations Adm. John Richardson issued a statement on the ongoing investigation to USNI News.

“This behavior is inconsistent with our standards and the expectations the nation has for us as military professionals. It damages the trust that the nation places in us, and is an embarrassment to the Navy,” Richardson said in a written statement.
“We are fully cooperating with officials from the Department of Justice and law enforcement agencies to ensure that those who violated the law are held accountable.”

Gilbeau has served as the “special assistant to the chief of the supply corps” since late 2013 – a position USNI News understands was a placeholder assignment while the investigation was ongoing.

He served in several supply officer positions that brought him to the Western Pacific– including as the supply officer for the 2003 deployment of the Nimitz Carrier Strike Group.

Gilbeau is the highest-ranking member of the Navy implicated in criminal behavior as part of the Glenn Defense Marine Asia scandal.

Prosecutors allege company owner Leonard Francis had crafted a web of Navy informants to provide classified ship movement data so his company could have a competitive advantage in bidding for ship husbanding contracts. Francis was arrested in 2013 after a three-year federal investigation.

Francis was notorious in the Navy for throwing lavish dinners for senior sailors and giving gifts to service members in addition to bribes to his informant network.

All three have since retired.

Perhaps the highest-profile flag affected is the outgoing director of naval intelligence, Vice Adm. Ted Branch, who had his access to classified information removed in late 2013 by Mabus.

“When I was informed in late 2013 that Adm. Branch was possibly connected to the GDMA case, I thought because of his position I should remove his clearance in an excess of caution. I was also told – assured – at that time that a decision would be made in a very short time – in a matter of weeks, I was told – as to whether he was involved and what would be the disposition of the case,” Mabus explained.
“We continued to check on that over and over and over again and got nothing.”

In a Thursday statement to USNI News, Mabus said since the investigation the service has made significant efforts in eliminating fraud.

“We now have some of the strongest counter-fraud efforts in the government, to include additional measures to assure contracting integrity,” Mabus said.
“We will continue to hold accountable those involved in fraudulent conduct.”