USS Preble (DDG-88) conduct an operational tomahawk missile launch while underway in a training area off the coast of California in 2010. US Navy photo.

One year ago, Navy surface warfare leaders announced a new concept, distributed lethality, that promised to add more fire power to all manner of Navy vessels and operate them in a way that would spread thin enemy defenses.

Now, those officers can report a great deal of analysis and work to improve the usefulness of weapons, and they promise even greater advances in 2016.

The Navy in June stood up a Distributed Lethality Task Force to “operationalize the concept of a distributed, more lethal force, and … synchronize and lead a transformation across the surface community to focus on warfighting—in short, to increase the combat capability of naval surface forces,” Commander of Naval Surface Forces Vice Adm. Tom Rowden told Proceedings last month. “One of the things the team has been deeply involved in is devising and implementing a rigorous program of analytics and wargaming efforts designed to give us a sense of how much distributed lethality can contribute, and how much lethality can be attained within anticipated resource levels.”

Rowden spoke about the task force on Tuesday at the annual Surface Navy Association national symposium, assuring the crowd of Navy and industry personnel that early analysis shows that distributed lethality as a concept “works, it delivers value.”

The Navy has conducted 10 wargames in the last 12 months to understand that value, Rowden said, and the service has already begun making changes to increase that value. The Surface and Mine Warfighting Development Center (SMWDC) was stood up in June to help advance surface warfare tactics, and the Navy is looking at adding a surface warfare advanced tactical training event during the pre-deployment workup cycle – between the basic training phase under the type commander and integrated training under the operational commander – “to ensure those ships are fully prepared and ready to go.”

“We’ve done a lot of analysis and wargaming to see which weapons are probably going to be the most effective and where we should put the next dime that we have. As you know, our budget continues to come down, so making sure we don’t waste money at the same time and get at that rapid movement out is just as important,” he said. “At this point, we’re testing, experimenting, putting together the same weapons with new technology and seeing where we’ll go in the next couple of years. Our idea is, instead of coming up with a single bright shiny object, add a little bit of technology to each weapon – whether that’s hardware, software, whether that’s the platform or the weapon, or maybe just a different way of doing things, a different way of gluing together the sensors and weapons we have.”

One example of this technique is using the Tomahawk land attack missile as a surface-to-surface missile, Fanta said at the SNA symposium. If the missile can hit small targets on land, it should be able to hit a warship at sea with minimal investment in upgrading the weapon.

“It flies a real long distance. I got it, it’s not perfect, it may not be the ideal, it doesn’t move at Mach 1 million, okay, I got it – but I’ve got 3,500 of them. It’s an incredible truck – let’s change the payloads, let’s change the sensors, let’s move it forward,” he said. “We’ve done this already, this is not aspirational, this is operational.”

Fanta said the Navy would conduct one more test this year and then be able to field the new capability.

“Last year we told you we were going to try it. This year we’re doing it,” he added. “This is not business as usual, this is not taking seven years to 10 years to make this work.”

Fanta told USNI News that he hoped to have the Tomahawk and other new combinations of existing missiles and trackers out “in reasonable numbers” by the mid- to late-2010s.

The Navy will also look at about five over-the-horizon missiles that may fit on the current Littoral Combat Ship, ideally testing them all at sea and determining which would be the best fit and could be fielded the quickest, Fanta said during his presentation. He told USNI News last week he hoped to have a missile on the LCS, at least in demonstration form, by the end of the year.

The overall impact to fleet operations will be tangible, both Fanta and Rowden said. In a new video Rowden played during his presentation, “by taking advantage of the over 8,000 [vertical launching system] cells in our fleet, we look to opportunistically fit ships with additional capability. By modifying existing weapons, we can empower ships currently without surface-to-surface missiles to engage surface contacts using a layered range approach in order to hold potential adversaries at risk and at range.” 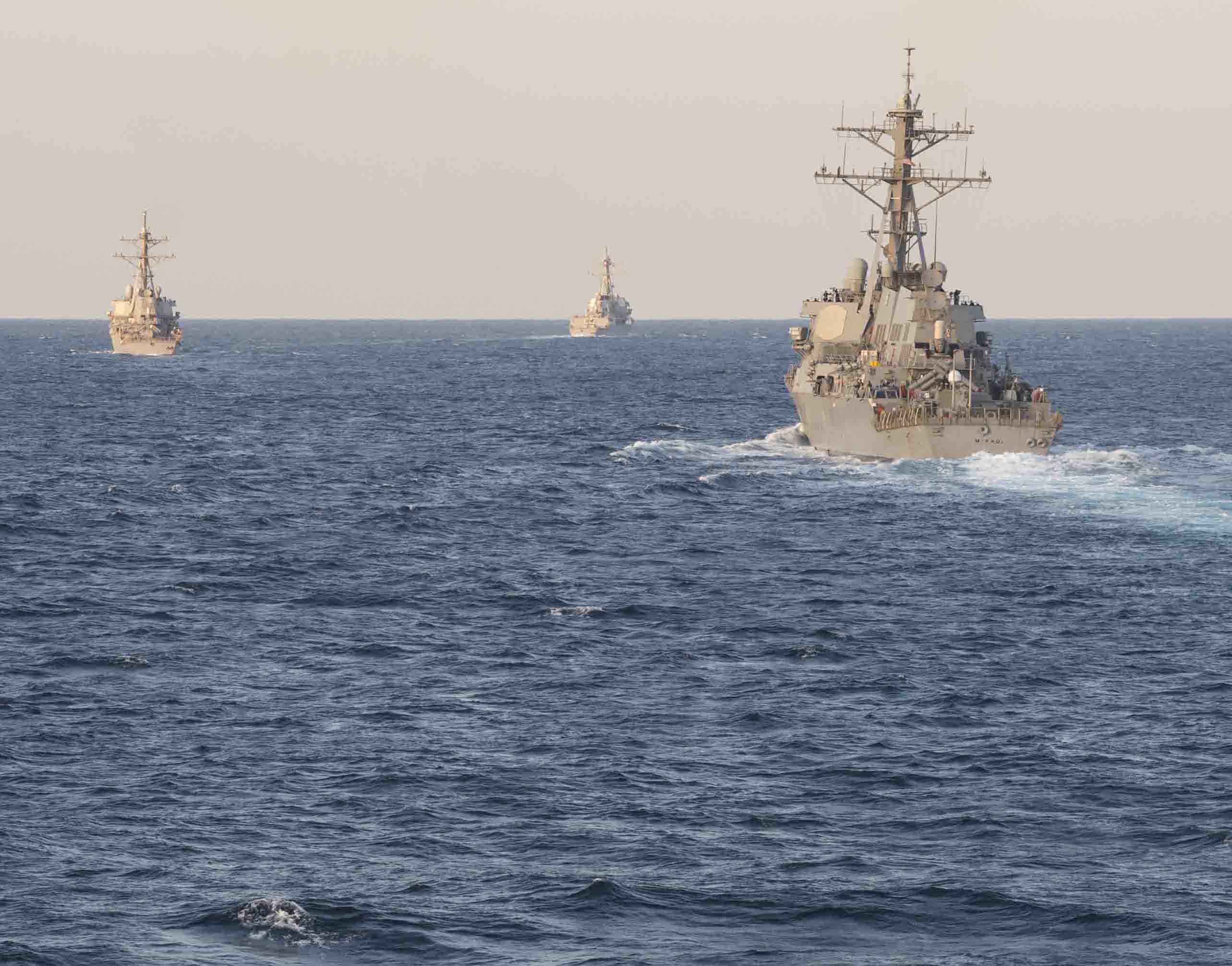 The Navy will also send out a three-destroyer Surface Action Group to re-learn how to command and control a group less complex than a carrier strike group but more complex than three independent deployers operating in the same vicinity.

Fanta told USNI News there have been some concerns that deploying guided-missile destroyers in this manner would take away from protecting aircraft carriers.

“We have to disabuse people of the idea that we’re taking current combatants away from the carrier strike group to do something with. We’re not,” he said. “Any high-value unit needs the same amount or more protection. Those guys will still be there. The question is how to take pressure off of those groups by offering up surface combatants or submarines or other things with advanced weapon systems, so now they provide another angle of attack or axis of attack that the potential adversary has to look for.”

Rowden said at the conference that Destroyer Squadron 31 would oversee the SAG deployment and would be responsible for developing new training programs to help get the most out of future SAG – which could eventually include foreign destroyers, LCS, amphibious ships or other assets assembled outside of the normal Carrier Strike Group or Amphibious Ready Group construct to achieve a specific purpose.

One of the two electromagnetic railgun prototypes on display aboard the joint high speed vessel USS Millinocket (JHSV 3) in port at Naval Station San Diego, Calif. US Navy Photo

A little farther out, the Navy is hoping to bring in new technologies – guided munitions, unmanned vehicles in multiple domains – to further advance the distributed lethality concept.

The service is working on developing a guided 57mm round for its Mk 110 guns on the LCS and other Navy and Coast Guard ships, Surface Ship Weapons Office Program Manager Capt. Michael Ladner told USNI News last month. Fanta said at the SNA symposium that the project, which is funded and working its way through the development process now, was important because it would leverage research already being done for the guided Hypervelocity Projectile for the Electromagnetic Railgun.

“We’re learning a great deal from how we’re operating, how we’re testing and how we’re developing those capabilities in railgun, and we’re expanding that to the rest of the fleet,” he said. “It would be a shame if we took all that science and all that engineering and just left it for a science project that will become operational in the future, instead of backfitting as much as we can on the current weapons.”

As for unmanned systems, Fanta told USNI News that aerial, surface and subsurface systems would be an important part of distributed lethality in the future. With so many organizations already investing in unmanned technologies – the Office of Naval Research, DARPA, industry – the new OPNAV N99 unmanned warfare directorate is helping Fanta identify which systems would best support the Navy’s new way of operating.

“Essentially what we do is, I tell them I have a requirement to do over-the-horizon targeting, or underwater surveillance, or something like that, and they go off and as fast as possible – as long as they have an agreement from us that I’m going to buy it when we move down the road – I need this, and they go find it,” he told USNI News.