PENTAGON – The Navy is currently charting its new roadmap for a family of future surface ships it hopes to enter the fleet sometime in the 2030s.

The future surface combatant study – set to complete in the late summer or early fall – is the early work that will lay out in detail a picture of the world and threats the next set of surface combatants will face and what the ships of the future will need to look like to combat them, the Navy’s director of surface warfare, Rear Adm. Peter Fanta (OPNAV N96) told USNI News in an interview last week.

“The future surface combatant study looks at all of the capabilities that we need to get across the board – from replacing [Cyclone-class patrol craft (PC-1)], all the way up through what we do with cruiser follow on and what do we do for the next destroyers,” Fanta said.
“We’re looking at a family of options. I have family of requirements. Now, for the large surface combatant, it’s both capacity and capability that we have to look at.”

The current generation of large surface combatants – Arleigh Burke guided missile destroyers (DDG-51) and Ticonderoga-class (CG-47) guided missile cruisers – have been in the fleet for decades and were all part of a surface-wide shift in capabilities across several different sizes of platforms.

The ships – though multi-mission — are optimized for anti-air warfare and built around a large radar array and a battery of vertical launch system (VLS) missile cells that field a variety of weapons. The ships centered on the Aegis combat system were part of a generational shift in thinking that traded boiler power for gas turbines and single purpose ships for multi-mission combatants.

And now, “we’re about at that inflection point again,” Fanta said.

What’s different in this generation of combatants is how Fanta and the Navy will tackle the problem of the next wave of ships. – constrained by budgets but buttressed by new networked weapons and technologies like directed energy and electromagnetic railguns.

“We’ll see a slightly different fleet [in the 2030s] but we’re going about it differently and how do I plug that together,” he said.

The U.S. surface warfare threat set is drastically different than it was merely five years ago.

While the emphasis from 2001 to 2010 for the broader military was low intensity ground combat in Iraq and Afghanistan the surface fleet was mostly tasked with providing long-range strikes with its Raytheon Tomahawk Land Attack Missiles (TLAM) and ballistic missile defense (BMD) protection roles.

Meanwhile other countries spent their development dollars in perfecting new and lethal weapons that put the U.S. surface force at risk.

While Fanta and other Navy leaders rarely mention a particular adversary in discussions of future capabilities or threats in the context of the development of U.S. capabilities Russia and China are the chief considerations for new platforms– especially China. 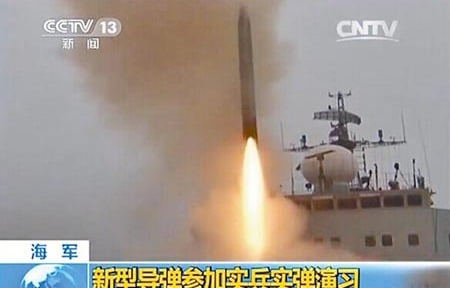 The People’s Liberation Army Navy (PLAN) has undergone a rapid development of new surface platforms that are catching up to U.S. dominance in guided weapon technology.

“In the last several years, China has invested in rapidly expanding its anti-surface cruise missile (ASCM) stockpiles with an emphasis on anti-surface warfare (ASUW), according to a report on the People’s Liberation Army Navy (PLAN) capabilities by the Office of Naval Intelligence (ONI),” USNI News wrote in April.
The task for the Navy now is how to leverage its shrinking technological edge on a budget. 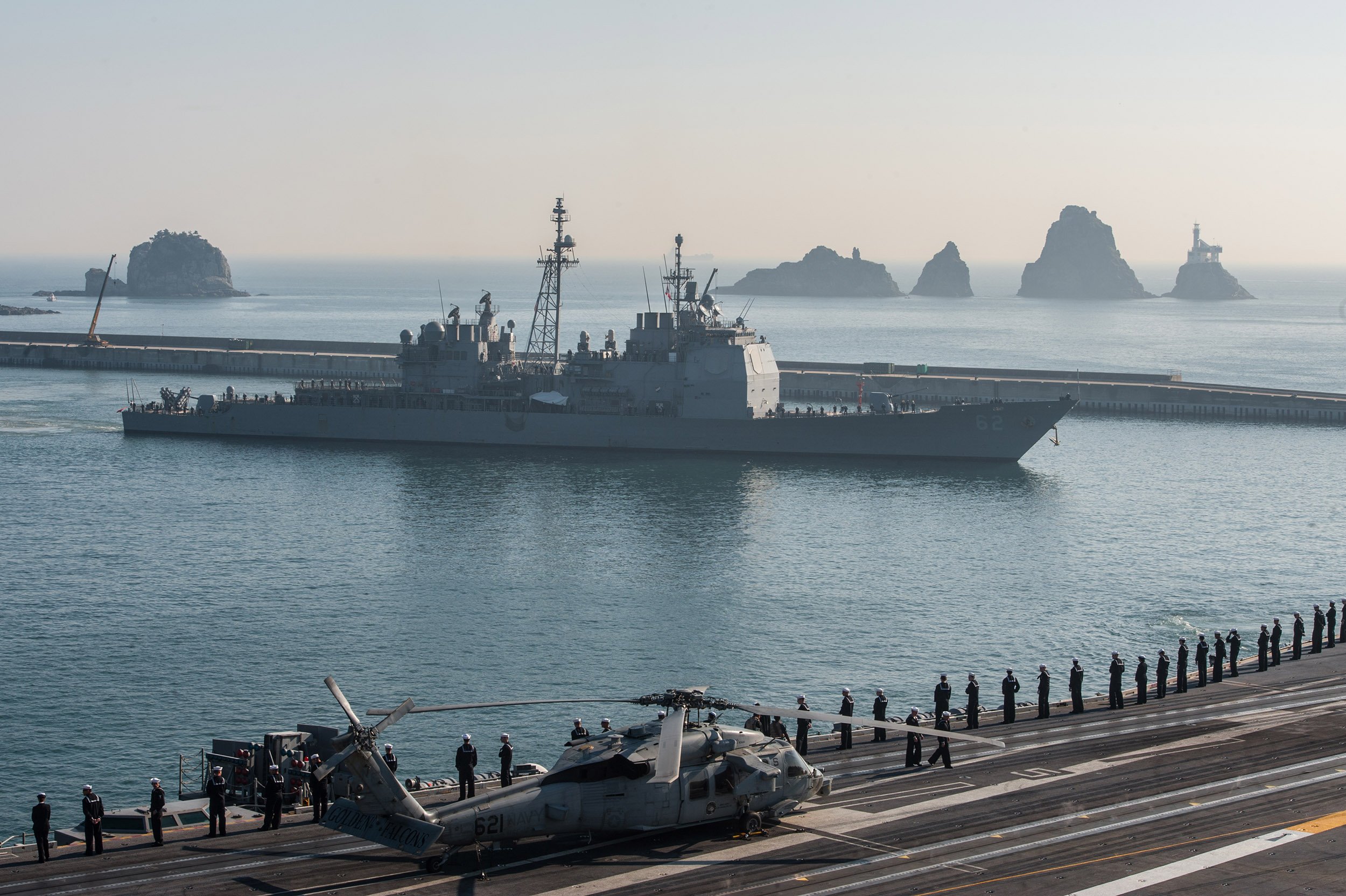 For the moment, the Navy’s Burkes are on track to be the most technologically adept large surface combatant in the fleet with a Flight III variant currently under development with a much more powerful air defense radar — the Raytheon SPY-6 — than the current SPY-1D resident on current ships.

Eyes are now on what will replace the older, but more heavily armed, Ticonderogas that – unlike the Burkes – are designed to handle the air defense commander role that directs the air war around a carrier strike group (CSG).

“For the large surface combatant, it’s both capacity and capability that we have to look at,” Fanta said.
“I get asked, ‘Why don’t you take a Flight III destroyer and turn it into a cruiser?’ What people forget is there is a lot of capacity difference between a cruiser and a destroyer.”

Burkes field about 94 VLS cells while the much larger Ticondergoas have 122 (depending on the ship). Each additional cell means more missiles the ship can fire.

For future ships, “I need both the capacity and the capability. So how do you do that?
The future surface capability study tells me how many missiles I’m going to have to have out there,” Fanta said.
“I don’t know that. But yes I recognize the cruisers coming out of the inventory sometime, starting in the 20s going through the 30s are going to leave me with a deficit if in nothing else VLS cells and command planning spaces and watch standers to handle that air defense commander role”

For the next large surface combatant, the Navy knows what it doesn’t want – a repeat of the Navy’s last attempt at developing a cruiser, the estimated $6 billion-a-hull CG(X).

“Last time we looked at a cruiser replacement we spent $30 million on a study to tell us a cruiser replacement was unaffordable… You can’t spend $6 billion on a first of class cruiser,” Fanta said.
“We looked at everything from nuclear power to advanced weapon systems to huge arrays to multiple numbers of VLS cells and it turned out to be so large that we might as well have plopped a deckhouse on an aircraft carrier.”

As the surface navy establishment puzzles through the threat picture, the ships that will replace the capabilities and the capacity are next on the development list and it might not look like the cruisers the Navy is familiar with.

“Have we come to a single point solution? No not yet. It will probably be a series of solutions,” he said.
“Being able to call something a cruiser is very comforting but what happens when one of them just carriers missiles that shoot down incoming air things and another one carries just anti-submarine warfare (ASW) weapons – or one of them carries every thing? I don’t know.”

The trick for the Navy with its new family of ships will be to balance capabilities and capacity in systems that make sense fiscally.

That means not building ships that can only do one thing and have the capacity to grow as new weapon systems and sensors are developed.

“Look at what we had do to with the Spruance-class destroyer, he said.
“Originally that was just for hunting submarines but there’s a lot of real estate – you put in a VLS launcher in there and what do you get? A lot of multi-mission capability. They’d be long gone if you hadn’t put VLS on them. Everything has to do at least two things…. The advantage of things like vertical launch cells is they bring modularity by themselves. I can stick a new missile in there. As long as I leave the deck space on there, I can bolt on other weapons. As long as I leave my self with a deckhouse with the structural capability of handling a bigger array or an upgraded array, I can unbolt one and put another one in.”

He used the Flight III Burkes as an example of taking existing designs and tweaking them for greater capability. The new ships will field the emerging crop of Raytheon Standard Missile 6s and the new SPY-6 Advanced Electronic Scanning Array radar.

“Some people [ask], ‘are you designing the modular ship?’,” he said.
“Well sort of. I can do that now. I can unbolt an array and put on a new one. I’m doing it with DDGs.”

The fleet of the 2030s will be set to take advantage of the modular aspects of current ships and build in those capabilities in the new ships to allow for more frequent upgrades. But beyond individual platforms, the Navy is set to exploit future networked weapon systems.

In 2015, the Navy’s first Naval Integrated Fire Control Counter Air (NIFC-CA) carrier strike group – the service’s concept of linking ships and aircraft sensors to create a network of spotters and shooters that can share targeting information – completed a successful deployment. As the concept evolves more networked weapons will be in the offing and fit into the modular fleet of the future.

“Given our ability to shoot any weapon off any sensor using the [current] trends in technology, maybe I carry a whole bunch of missiles on one [hull] and then the sensors are somewhere else,” Fanta said.
“It’s a group of capabilities I have to cover and it maybe a family of systems that allows me to cover those – all of them being upgradable when the next weapon shows up or the next sensor shows up.”

That means adopting design models that will allow ships to shed and take on weapon systems with minimal amount of work to integrate them on hulls.

New technologies like directed energy and electromagnetic railguns would factor into the new designs as well.

While the specifics are still being developed, the one constant will be the money the Navy can spend — about the $2.1 billion cost of the current Burkes.