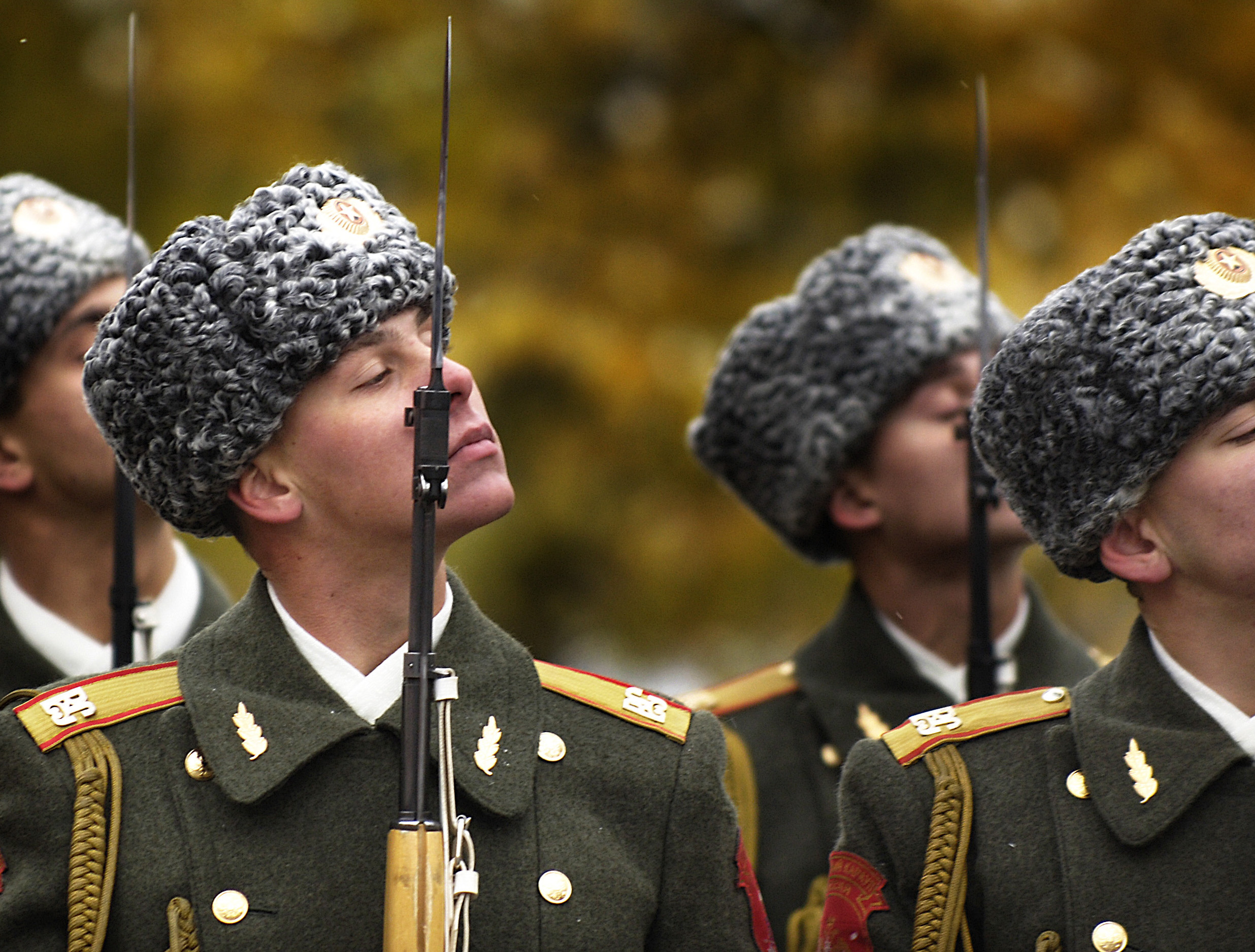 The Russian Honor Guard stand-by as part of a ceremony in 2006. U.S. DoD Photo

Although “Russia is not a rising power . . . even in military terms,” Moscow can still “disturb and do harm,” one of the nation’s leading scholars on strategy told attendees at a Center for Strategic and International Studies forum Friday.

Walter Russell Mead, of Bard College, said at the Washington, D.C., event, “Declining powers are dangerous powers” because they “do not feel that time is on their side.”

Regimes such as President Vladimir Putin’s in Russia “feel an urgency to act” and see themselves as gamblers willing “to take less favorable odds,” as Robert E. Lee did for the Confederacy in the American Civil War, and still act.

“We are not always swift to move,” he said of the West. “Putin can move more quickly than we do” as he did in Crimea and Ukraine.

Mead said Putin sees three circles of opportunity for action. The first lies in the “post-Soviet space” where “he is surrounded by a belt of weak states” such as Moldova and Ukraine. Like his Soviet predecessors, he intends to move on them. The second is in the European Union, where he sees the tensions that exist between the wealthier northern nations and the less well-off south as a situation that can be exploited to Russia’s advantage because unanimity is required in the union for action. “The process of accession and integration has not worked equally well.”

The third circle comes in the Middle East, which has devolved “into complete bloody chaos” at the same time as the United States is withdrawing large forces from the region. Mead sees Russia developing a bloc with Shi’ia countries, such as Iran, Iraq and Syria that can act as a counter against Sunni extremism that threatens Moscow itself.

This bloc could drive a wedge in the Organization of Petroleum Exporting Countries that would send oil prices higher, generating more revenue for the Shi’ia countries and Russia. That “may not be out of his reach.”

Ways to counter Putin’s moves would be a commitment by the West to rebuild Ukraine to “make it look a little more like Poland” gradually and over time and double down on strengthening the transatlantic alliance and the European Union.

Use “the power of international organizations and the law to grind [Putin’s regime] down.” He added, “We should be looking for ways to make law-breaking expensive.”

“We didn’t mean to fail Russia” when the Soviet Union collapsed. In the future in dealing with a more democratic Russia than Putin’s, the West needs to be wiser in its approach to Moscow than just saying “no.”

Earlier in the day, CSIS sponsored panel discussions on where Russian and Western relations stand now. What are the differences between 1946 (the beginning of the Cold War) and the second decade of the 21st century?

Unlike the containment policy for the Soviet Union that diplomat George Kennan outlined in his “long telegram” of 1946, today’s Russia has no clear ideology much beyond regime survival and Putin’s insistence that Moscow is a great power on a level with the United States and possibly China.

That was the view of Ulrich Speck, of the Transatlantic Academy, during a discussion that preceded Mead’s address.

He said Putin “needs a narrative of success,” as happened in Russia after his seizure of Crimea.

As Mead pointed out, Putin is trying to “rebuild a sphere of control” over its immediate neighbors such as Ukraine and the Baltic states, create a sphere of influence in the European Union by emphasizing its status as a nuclear power “and re-establish itself in the Middle East” as it is trying to do in backing Bashar al-Assad in Syria.

Speck said Putin and the political elite around him “are pushing back against liberal democracy” on its borders and in the homeland.

Marek Menkiszak, of the Centre for Eastern Studies in Warsaw, said, the Russian elite’s view of the world is very different from that of the West. In part, it comes from Putin’s and others’ background in the secret services.

The members of the elite believe that “the United States organized the Color Revolutions,” such as the “Orange” in Ukraine, as a means to overthrow their regime in Russia. They believe that has been U.S. policy since the break-up of the Soviet Union. They also see a threat to the regime in the work of a number of non-governmental organizations in Russia and the Internet in penetrating their control of society.

“Power in Russia is increasingly personalized” and becoming more autocratic than authoritarian, he said.

Olga Oliker, director of CSIS’s Russian and Eurasian programs, said, even with these changes inside Russia the governing elite does believe it is possible to work with the United States in certain areas. Future United States policy “calls for hedging, not containment.”

Speck said Ukraine can serve as a model for that future policy. The West showed it was still willing to act in collective defense; sanctions “signaled to Moscow the West’s” concerns about its backing of separatists; even in the Ukrainian crisis the West kept diplomatic channels open even while showing support for Ukraine and other nations bordering Russia; and the West’s realization the Russian challenge will continue.

“We need to be clear with what we want,” he said.

Oliker added it was “not enough to signal; the signal has to be understood”—and that’s the value of keeping diplomatic channels operating.