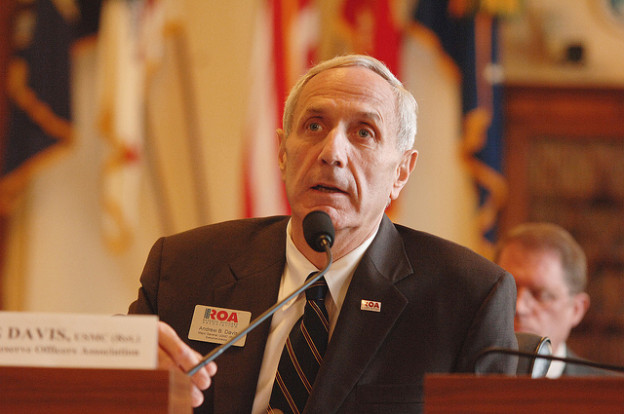 The Reserve Officers Association (ROA) executive director’s experience—newspaper publisher, university faculty member, and the head of another not-for-profit—can be used to illustrate what can happen when a reserve officer is mobilized.

Retired Marine Maj. Gen. Andrew Davis said that when he was mobilized for Desert Storm in the early 1990s, “I was the publisher of a newspaper owned by the Chicago Sun-Times.” At the time, he was a lieutenant colonel in an infantry battalion.

While the fighting was intense, the time spent in combat was short, but not for Davis. “I was gone for a year.” During the time he was gone, the newspaper made up the difference between his military pay and his civilian pay. “They were a model employer,” he said.

Davis, speaking on Dec. 5 after an ROA forum on supporting employers in an era of an operational reserve force, described what happened at Northwestern University when he was asked to head a Marine Corps unit for a year.

“They had no idea” of what to do and what he was telling them about returning to his position when his active service was up.
“In the end, they followed the law.”

“Much of the support [by employers] has been for patriotism,” Davis said.
But, “will that employer support continue in the peace dividend?”—especially with their reserve component employees “going away every five or six years.”

Ruth Samardick, director of National Programs at the Department of Labor, said, “Patriotism is there, but we think it’s tertiary.” Looking at the 800,000-plus Guardsmen and reservists who have been mobilized since the Sept. 11, 2001 terrorist attacks, she said.

“This is the most highly trained and disciplined workforce you can find in the United States,” Samardick said.

But there are instances of “stealth discrimination” in hiring. Susan Gates, who headed the RAND study, said, “Discrimination issues are a concern” and it is necessary “to remind all employers”—public and private—about their legal obligations and also the appeal process available to them. Many Guardsmen and reservists come from the public sector, especially the federal government.

In the current issue of ROA’s magazine, Gates broke down the employment figures this way: 53 percent work in private sector, 40 percent in public sector [about half of those are federal employees], 3 percent at non-profits, and the rest in small or family-run businesses.

Samuel Wright, director of ROA’s Serve Members Law Center and a retired Navy Reserve judge advocate general officer, said re-employment cases involving states can be difficult because of the 11th Amendment, which gives states sovereign immunity from suits that some lower courts now say apply to political subdivisions of the states, such as cities and counties.

He added that almost half of the inquiries to the law center by phone or e-mail concern re-employment or leave policies.

At the same time, Lt. Gen. Jeffrey Talley, who as chief of the Army Reserve commands more soldiers than all the other services, said that communication is a two-way street and reservists must keep their families and their employers informed about their actual mobilization status [voluntary or involuntary].

“It doesn’t have to be a huge problem to be a huge perception problem,” Talley said.
The impact of a deployment of even one employee or a family member can be devastating to a small business, Barbara Carson, deputy associate administrator for Veterans Business Development in the Small Business Administration, said.

Speaking from her own experience and as an Air Force Reserve colonel herself, “I had to close my business when my husband deployed” as an AWACS pilot.

Talley said he tells Army reservists, particularly those in senior ranks, “You have to be much better than the average employee.” There are 205,000 soldiers in the Army Reserve.
He added, “It’s not fair to [the employer] to use motherhood, apple pie” discussions as reasons to hire and promote reservists.

“We want to hire reservists,” Ron Jadin, chief financial officer at W.W. Grainger, a business-to-business logistics employer. “But we don’t know who they are” and many reservists don’t know about the company—recently honored by the Defense Department for its hiring and promoting of reservists. Grainger has taken a step forward by having its returning reservists or veterans examine résumés “to see what jobs are available” for service members coming off mobilization or active duty.