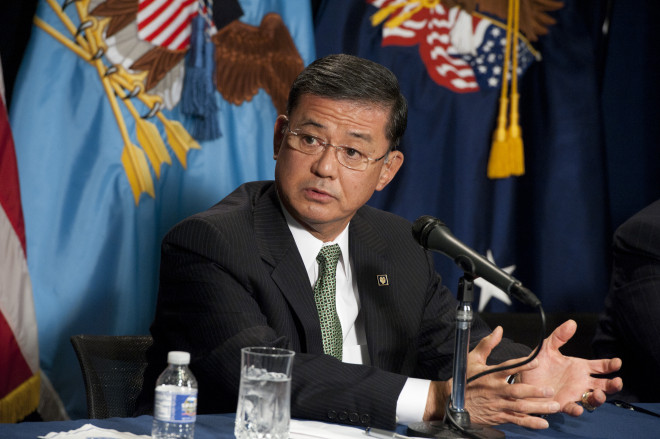 Department of Veterans Affairs Secretary Eric Shinseki told the House Veterans Affairs Committee on Wednesday he would have to deliver bad news to more than 5.18 million veterans, survivors, and their children if the partial government shutdown continues into late October.

At that point, he said, the department will not have enough money to cover its November benefit checks. Shinseki said that the Veterans Benefits Administration would have just $2 billion to cover the $6.25 billion in claims due at the start of next month.

“I will not be sending checks out,” Shinseki said, when the funds in the mandatory account fall below its obligations

The department announced furloughs for 7,800 members of the benefits administration on Monday.

Although he did not give an exact date when the benefits administration could no longer cover its mandatory payments, Shinseki said the department also will furlough all but 1,000 to 1,500 of its remaining 13,000 employees to keep open the regional offices.

They will only be accepting new claims, dating them and putting them into the processing system. VA call centers will remain available.

“All the effects of the shutdown are negative,” Shinseki said. He said that work on reducing the backlog of disability claims has ground to a halt. The Veterans Cemetery Administration also will be furloughing workers, and burials will be delayed. He said the VA buried 122,000 veterans in its cemeteries last year.

He also said education benefits for tuition, fees, and books have likely already been paid out, but the monthly housing checks for veterans under the post Sept. 11, 2001 GI Bill will not be cut for November.

“We’re trying to keep our operations going as long as possible,” as well as take care of the 335,000 VA employees. The department is trying “to close out in an orderly fashion.” But the longer the shutdown, the more time-consuming it will be to restore operations. “We don’t want to spend 30 days to get up and running.”

Because there has been no money approved for Fiscal Year 2014 for most of the federal government, Shinseki has been using carry-over funds from last year to keep everything open, with the exception of the VA Health Care System. That part of the VA [from large regional poly-trauma centers to mobile clinics—which employ 80 percent of the agency’s work force] is largely unaffected by the shutdown because it is financed on a two-year budget.

(North Chicago is an exception; it is operated as a joint VA-Defense Department facility because of its proximity to the Great Lakes Naval Training Center.)

Medical research and production of prosthetics are also affected by the shutdown, Shinseki said.

He noted that in many cases the VA is working with other federal agencies, such as Education for the GI Bill, the Small Business Administration for loans, Labor for job training, etc. If they are not open, then the veteran will not be able to use that benefit even if the VA received authority to keep operating. “It depends upon the issue” as to how the wider shutdown affects veterans trying to use their benefits even when the full government returns to business as expected.

As the hearing neared its end, he said, “I just didn’t think the august members of this committee and the Congress would allow [the shutdown] to happen.” But “in the last week of September it was clear what was going to happen” and, like other departments, the VA had to dust off reports on how the closures in the mid-1990s were handled.