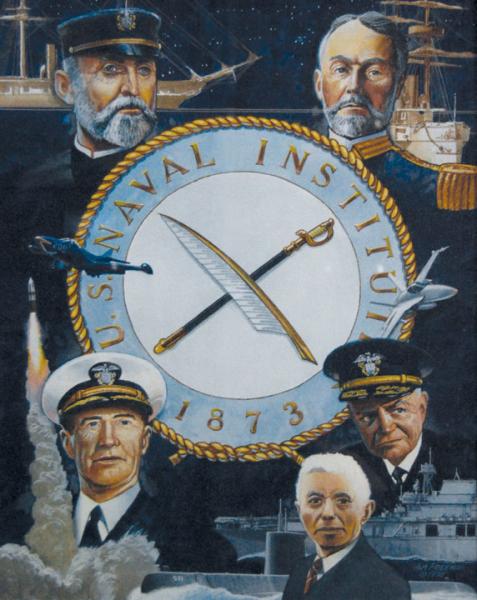 Sometimes in the throes of the monthly and bimonthly Proceedings and Naval History deadlines we lose sight of just how much bigger the U.S. Naval Institute is than any or all of us. And the 15 founding members who convened on the evening of 9 October 1873 by the light of oil lamps in the U.S. Naval Academy’s Department of Physics and Chemistry building probably had no idea that the organization would ever be as influential and relevant as it is today.

By 1873, the bloody War Between the States was a distant memory, having ended more than eight years earlier. Sometime that year Commodore Foxhall Parker, a Civil War veteran himself, is thought to have spawned the idea for “a professional forum similar to the Journal of the Royal United Service Institution .” The U.S. Navy had become a mere shadow of its former self (by some accounts going from 700 to 52 ships within five years after the war), and the innovation that helped the Union emerge victorious had grown stagnant. The global effects from what is known today as the Panic of 1873 (a crisis that spawned what was dubbed the “Great Depression” until the depression of the 1930s overtook that label) didn’t help the Navy’s grave shipbuilding situation. The month before the Naval Institute’s first meeting, a series of bank failures closed down the New York Stock Exchange for ten days, and layoffs spread across the country.

A group of servicemen in Annapolis decided that something needed to be done to reinvigorate and rejuvenate the Sea Services. So under the organizational guidance of Navy Lieutenant Charles Belknap, those original members assembled with their first leader, Naval Academy Superintendent Rear Admiral John L. Worden (pronounced WERE-den, a correction made at a history conference by one of the admiral’s descendants). Worden was best known as the captain of the USS Monitor , the Union Navy’s first ironclad ship that gained fame in the Civil War Battle of Hampton Roads against the former USS Merrimac , which the Confederates had converted to the ironclad CSS Virginia . As fate would have it, one in the group, Commander Samuel Dana Greene, had been Worden’s executive officer and acting commanding officer in the Monitor . The founders also included one Marine officer, Captain McLane Tilton. Read more in the current issue of Proceedings.