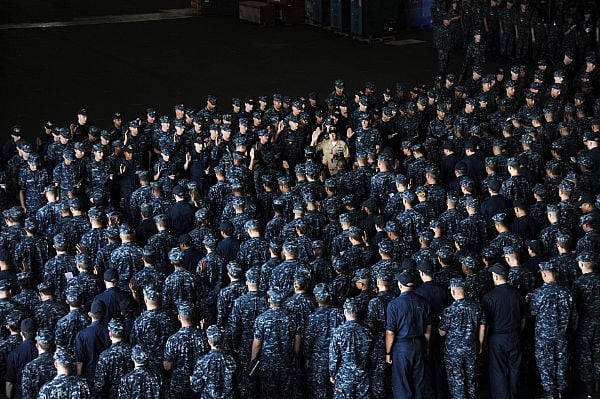 “Retention is staying higher this year that what we programmed for” in the 65,000 Navy Reserve force, its chief—Vice Adm. Robin Braun—told USNI News. The active Navy, is experiencing the same phenomenon. But because “we can’t grow a reserve submarine officer, a reserve operator,” Braun is on the lookout for those and other unrestricted line officers leaving active duty.

Braun said the Navy, like the other services, is also looking for more medical professionals, most of whom serve in reserve components. The Navy’s need for sailors in the reserve remains small.

Her Marine Corps counterpart, Lt. Gen. Richard Mills, told the Reserve Officers Association on 9 August that this is a “golden era to hand-pick those leaving active duty” because of the drawdown in the active Marine Corps. “There has never been a pool of such talented people” available. “We’d be foolish not to take this opportunity” to keep the ranks of his almost 40,000-strong Marine force filled.

He added that was especially true of attracting Marines who are leaving active service but have received extensive training in complex fields, as well as finding in the civilian population those men and women with same skills and bringing them into active or reserve Marine Corps service.

One of those skills is cyber. Braun said that the demand is so high for cyber-sailors that the Navy schoolhouse is taxed to the limit, but “we need to grow that capacity.” Likewise, the Navy wants to grow its ranks of sailors with technical skills in unmanned systems—but tight budgets and sequestration, she said “push those out another two or three years.”

One of the sea services’ reserve components—the Coast Guard—considers itself operational at all times. Rear Adm. Steven Day, acting director of reserve and military policy, said, the Coast Guard’s more than 7,000 reservists “are fully integrated as an operational force.” The Coast Guard did away with reserve units in the mid-1990s.

The reason the Coast Guard Reserve remains operational “is to answer that call like Deep Water Horizon,” the offshore well explosion that sent millions of gallons of oil into the Gulf of Mexico in 2010.

While the Army and Air Force reserve components stress identifying themselves as “operational” over “strategic,” the Navy and Marine Corps take a slightly different tack. Mills said, “We are looking at the reserve as being a shock absorber” in a longer conflict as well as being operational to relieve pressure on the active force. They need to be ready “to go out the door fairly quickly.”

“Let’s keep them in a part-time status” until they are needed, Braun said. “There are so many different missions in the Navy Reserve. We have room for 38-days a year [monthly drills and annual training]. Exceptions to this, she added would include more operational forces, such as Seabees.

Looking at tight budgets into the foreseeable future, Mills said, “The need for family readiness remains” even as the drawdown continues in Afghanistan. “I think we have to resist” cutting family readiness programs.

In addition to the stand-downs to address sexual abuse that all components of every service conducted, Mills said the Marine Corps has stressed its ethos training of responsibility. At the same time, it has “hardened the target” with increased supervision in barracks and hotels.

Braun said, “Fifty percent of reports [of sexual abuse] have to do with alcohol,” and the Navy has launched programs to curb alcohol use and abuse. “Every sailor knows that it’s their responsibility to end [sexual abuse and assault].”