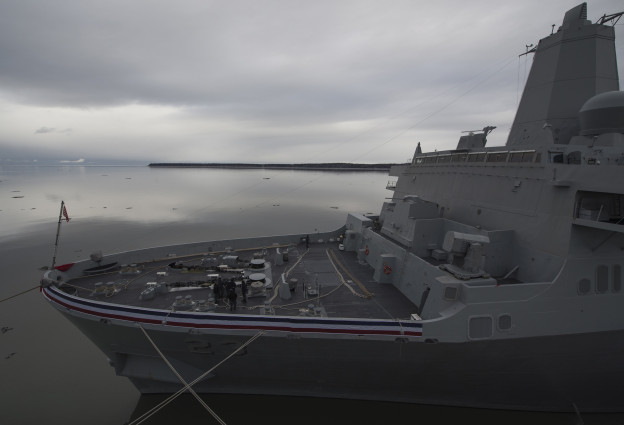 USS Anchorage (LPD-23) completed its final contractor trial in July, overseen by the U.S. Navy’s Board of Inspection and Survey (INSURV). The most recent test of the ship’s systems are the last review while the ship is still under warranty from shipbuilder Huntington Ingalls Industries.

“During these trials, the ship’s crew successfully demonstrated a variety of systems including main propulsion, engineering and ship control systems, combat systems, damage control, food service and crew support,” according to a statement from NAVSEA.
“Among the highlights of the trial, Anchorage successfully completed a full power run, self-defense detect-to-engage exercises, rapid ballasting and deballasting, steering and anchor handling demonstrations.”

This ship and its crew — based in San Diego, Calif. — had previously completed combat systems qualifications, engine certification and proof the ship and crew could successfully operate Anchorage’s well deck and ability to replenish the ship while underway.

Anchorage will be the seventh in the class and will be the second-to-last ship built at HII’s Avondale shipyard in Louisiana. HII has plans to turn the facility into a manufacturing center for oil and natural gas equipment, the company told USNI in February.
The eighth ship of the class — Arlington (LPD-24) — delivered to the Navy in December and the ninth — Sommerset (LPD-25) — is under construction in Avondale.

The Navy plans to buy 11 of the 25,000-ton San Antonio ships. The ships are designed to operate as part of a three-ship Amphibious Ready Group (ARG) and can embark up to 800 Marines. HII and some members of Congress have asked the Navy to consider extending the line to use the hull design as the basis for the Navy’s next-generation amphibious dock-landing ships — the so-called LX(R). HII has also floated the idea to use the hull as a ballistic missile defense combatant.

Early ships in the class were plagued with numerous design and manufacturing problems that HII and the Navy claim are under control.