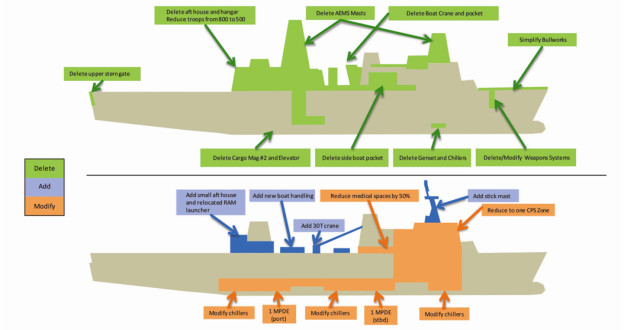 However the Navy didn’t ask for the money for what would be LPD-28, leaving open questions for the future of a class that was supposed to stop at 11 ships.

In 2012 the Senate Appropriations defense subcommittee had concerns the Navy would fall short in demand for amphibious ships from combatant commanders. According to the Navy’s 30-year shipbuilding plan for Fiscal Year 2013, it wouldn’t begin funding the next amphibious ship class until 2019.

“The Navy and Marine Corps have agreed on a fiscally constrained minimum force of 33 ships to meet a 38 amphibious warship force requirement,” read the 2012 report from the subcommittee.

“The Committee is deeply concerned about the level of risk being assumed with amphibious lift capability and the impact this has on Commanders to meet operations plans and crisis response requirements, particularly as the Department of Defense rebalances its global posture towards the Asia-Pacific region.”

According to one Navy official, the money was placed in the Fiscal Year 2013 budget by Congress, in part, to ease concerns of the shipbuilding industrial base.

“What Congress is looking at is that is a gap in the amphibious ship construction and that’s never good for industry,” Sean Stackley, assistant secretary of the Navy for Research, Development & Acquisition, told reporters during a briefing Navy League’s Sea-Air-Space Exposition 2013 at National Harbor, Md. prior to the release of the Fiscal Year 2014 Department of the Navy budget.

The Congressional funding could also be a signal to the Navy to accelerate development for a new class of amphibious warship to replace 11 aging Whidbey Island-class (LSD-41) dock-landing ships – the LX(R).

Currently the Navy is conducting an Analysis of Alternatives (AoA) for the new class, Navy officials told USNI News.

U.S. Marine Corps Commandant, Gen. James Amos, has suggested the LPD-17 hull should be the basis for the Navy’s LX(R) program, according to a report in Military.com.

LPD-17 builder, Huntington Ingalls Industries, has pushed forward a modified version of the San Antonio hull to serve as the basis for LX(R). Dubbed LPD-17 Flight II, the ship would be a scaled down version of the San Antonio-class. The Flight II would carry 500 Marines (300 less than LPD-17), reduce the size of the medical facilities by half and eliminate the hangar facilities.

The changes would put the Flight II in line with the capabilities of the LSD-41 class. However, the requirements for LX(R) won’t be fully fleshed out until the release of the current AoA.

For more information on the San Antonio class and its procurement history, visit Taylor’d Reports.