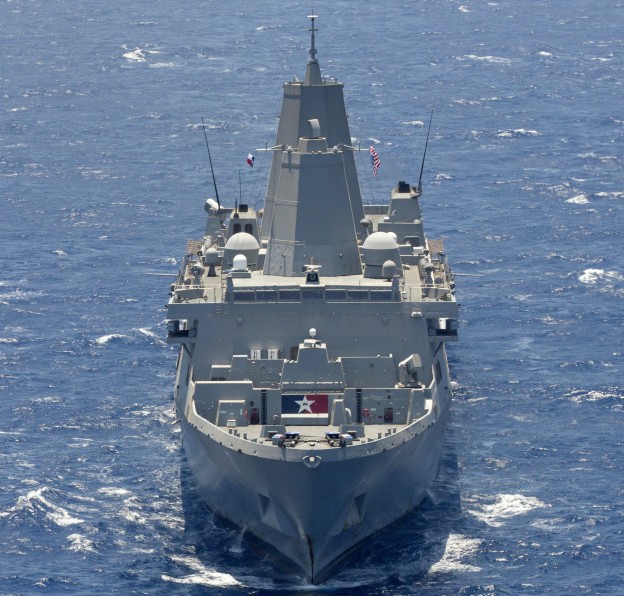 Chief of Naval Operations Adm. Jonathan Greenert said last year: “We need to move from ‘luxury car’ platforms — with their built-in capabilities — toward dependable ‘trucks’ that can handle a changing payload selection.” There is one platform that can fulfill that requirement: the San Antonio-class landing platform dock (LPD).

Much has been written about the maintenance problems on the USS San Antonio (LPD-17), and, as commander of Expeditionary Strike Group Two, I lived the issues daily in getting the ship fully operational. However, in January 2009, as I stood up Combined Task Force 151 to combat piracy in the Gulf of Aden, the San Antonio was designated as my first flagship, and I learned firsthand the remarkable capability of this unique platform. Further proof the ship has fully turned the corner: In 2012, she was presented the Navy’s Battle Effectiveness award.

With its multimission capability, the San Antonio served as an afloat, forward-staging base as we took on one of the biggest challenges of combating piracy in many years. In addition to its standard load-out of Marine ground forces, the ship was able to embark helicopters from Helicopter Anti-Submarine Squadron 3 (HS-3), Fleet Surgical Team 8 and an eight-member U.S. Coast Guard Law Enforcement Detachment Team (LEDET). The ship’s robust command, control and communications suite provided my staff and me with exceptional command oversight. As the task force commander, I can say confidently that this was truly the right platform for this dynamic mission.

The LPD program continues to perform well, and those in the Marine Corps—from the lance corporal to the battalion commander—have often said how satisfied they are with the platform. The Navy has a very stable design-and-build plan in the LPD class: the shipbuilders know how to assemble the ships very efficiently; the supplier base is extremely familiar with the program; and the production line is humming, having delivered three San Antonio-class ships over the past year—LPDs 22, 23, and 24. Given the positive performance in building the class, I believe this is an excellent opportunity to leverage the platform and hull form into a new flight of ships and, as Adm. Greenert directed, a platform “that can handle a changing payload selection.”

My understanding is that the Navy is about to begin the analysis of alternatives (AOA) process for the next landing ship dock class, LX(R). I recommend the Navy take a hard look at an LPD variant to save multi-millions in the shipbuilding account. With minor changes to the basic LPD design, I believe the Navy can be offered a very robust platform that can perform amphibious warfare missions, maintain level-2 survivability for our sailors and Marines, and reduce the cost from the LPD of today.

Using an LPD hull for the landing ship dock (LSD) replacement creates an opportunity for cost savings because the platforms would have common equipment, common Integrated Logistics System (ILS) requirements, common training pipelines and a common knowledge base for sailors and Marines. Cost, schedule and technical performance risks would also be reduced because there would be no need to start from a “clean-sheet” design with all the non-recurring engineering and first-of-class growing pains that go along with starting a new program.

San Antonio-class ships have a tremendous amount of capability, are very flexible, and have the potential to fulfill multiple missions. The ship can be adapted to accommodate many missions, including amphibious warfare, humanitarian operations, joint command and control, ballistic missile defense, and hospital operations. By keeping a proven ship class in production for as long as possible, we can maintain our maritime dominance while saving critical shipbuilding funds. This approach allows the Navy to build the same hull for decades and benefit from the industrial learning curve. It will also serve to increase the commonality in the fleet. The sailors and Marines will be familiar with the platform, its capabilities, systems, equipment, and so forth. It will also have tremendous benefits in logistics, training and spares.

In the 2013 National Defense Authorization Act (NDAA), it is the sense of Congress that “the next generation amphibious assault ship should have ‘commonality in hull form design to reduce acquisition and life-cycle cost.’” In the early days of my naval career, the Navy demonstrated this concept with Spruance-class destroyer. That hull form was the lead ship of a new class, and the Navy built 62 ships over three classes using that same hull form. I believe the USS San Antonio hull form has the same potential and can be used for multiple missions. The LPD variant could be the affordable, capable, survivable next-generation amphibious ship of a platform that can meet the requirements of the warfighter in new defense strategy.

A version of this post appeared on the USNI Blog.