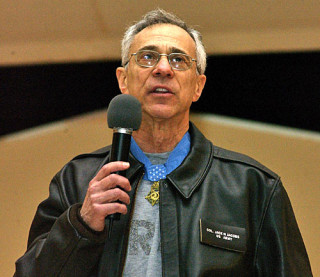 The creation of the new medal honoring unmanned vehicle pilots and cyber troops, “is a telling and sad commentary on the judgment of those who are responsible for the creation and approval of this award,” Jack Jacobs, Medal of Honor recipient and Vietnam veteran, told USNI News on Wednesday.

Jacobs, a retired U.S. Army colonel, joined veterans groups and members of Congress upset with the precedence of the Distinguished Warfare Medal created to recognize contribution away from the front lines.

“The very name of the decoration is ludicrous. ‘Distinguished’ implies a level of admiration that can’t possibly be reached in the prosaic act of piloting a drone,” Jacobs said.

Currently, the Distinguished Warfare Medal is higher in precedence than the Purple Heart and Bronze Star.

The Distinguished Warfare Medal was announced in February by then Secretary of Defense Leon Panetta. The award almost immediately came under fire from Congress and groups like the Veterans of Foreign Wars and the Military Order of the Purple Heart.

The Pentagon announced Tuesday Chairman of the Joint Chiefs, Gen. Martin Dempsey, would lead a 30-day review of the medal. Pending the review, the new medal has ceased production, Pentagon spokesman George Little said on Tuesday.

“Nobody has been put in for the award and each of the services are establishing criteria and procedures for processing requests within their own respective departments,” he said.
“We have time to make sure we get this right.”

Jacobs not only questioned the ranking of the medal but also its existence.

The Department of Defense, “already has a plethora of medals for distinguished, meritorious and commendable service, and any of them could be awarded if a benighted chain-of-command believed that a drone was being flown in some exceptional fashion,” he said.

“Although these weapons are used in warfare, that in no way implies that the operators are warriors themselves. They are decidedly not.”