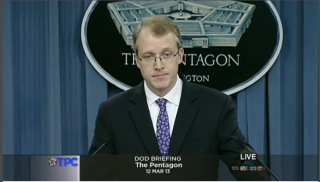 Secretary of Defense Chuck Hagel is calling for a review of the ranking of a controversial new medal created to honor the contribution of unmanned vehicle pilots and cyber troops, a defense official told USNI News on Tuesday.

“Production of the medal has stopped and no one has been nominated for this medal,” Little said.

The decisions for the review, made Monday night, follows protest from several veterans groups and members of Congress.

Hagel defended the medals ranking to Sen. Sen. Pat Toomey (R-Pa.), calling it: “properly ranked,” according to a Monday release from Toomey’s office.

The medal was announced last month by former Defense Secretary Leon Panetta and ranks higher in precedence than the Bronze Star and the Purple Heart citations.