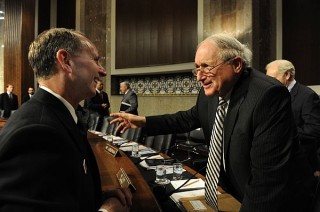 Chief of Naval Operations (CNO) Adm. Jonathan Greenert is greeted by Chairman of the Senate Armed Services Committee on March, 15 2013. US Navy Photo

Senate leaders have joined a grassroots call to lower the precedence of a new medal that recognizes warfare contribution from unmanned vehicle pilots and cyber troops.

“Like so many of the veterans groups who have expressed their displeasure with this recent announcement, we are very concerned about the message that this decision sends to those brave veterans of our nation’s wars since 1941 whose heroism and meritorious service has been recognized by the Bronze Star Medal,” read the joint letter.
“We trust that the judgment you gained from your combat experience as an enlisted soldier in Vietnam will inform your decision about the appropriate precedence of the DWM in relation to the Bronze Star Medal and the Purple Heart.”

The new Distinguished Warfare Medal annouced in February at the Pentagon. DoD Photo

Hagel defended the rank of the medal, introduced by his predecessor Leon Panetta, in a letter to veterans groups on Friday.

“It in no way degrades or minimizes our nation’s other important awards or the tremendous sacrifices of our men and women who earn these prestigious recognitions,” Hagel wrote. “It recognizes a specific type of contribution that is vital to the defense of our nation.”

In a separate response to Sen. Pat Toomey (R-Pa.), Hagel said the DWM was, “properly ranked,” according to a Monday release from Toomey’s office.