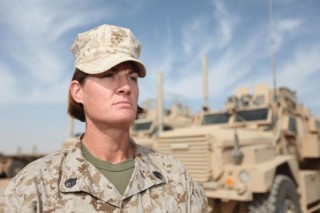 Anticlimactic because for the past decade, despite being excluded from combat positions, women have experienced combat, have fought well, and have been wounded and killed. Despite the original intent of the policy—to keep female service members away from ground combat—the nature of these wars and lack of real front lines have rendered the policy obsolete. Absurdly necessary because, although the military is styled as a meritocracy with an unceasing array of metrics by which we are constantly measured, gender still qualified—as of last week—as a major tool to quantify individual strength, intelligence, and endurance. Despite the existence of a detailed Performance Evaluation System, the testing, evaluation, and frequent recalibration of physical fitness tests, and years of data showing how widely individual ability varies and can be adequately quantified, gender still mattered more. By highlighting gender as a prime quantifier of service members’ abilities, the Combat Exclusion Policy codified the concept that women are the “other” while men are the norm. So Thursday’s announcement was anticlimactic yet absurdly necessary. The removal of such a divisive policy will enable individuals to be evaluated on merit rather than by preconceived assumptions about the abilities of all members of either gender, just as we should be.

Yet despite the nature of the announcement and the absurdity inherent in the need for it to begin with, the path to implementation contains serious hazards, some of which are voiced by thoseopposed to allowing women into combat roles. As a force we must navigate these wisely from the start. The pitfalls include fears that women will be unable to physically perform in combat, that capability will be sacrificed for “diversity,” and the divisiveness of possibly allowing women to select jobs to which men may be involuntarily assigned. Maintaining and continually improving force capabilities is our principal task; our leaders must ensure those capabilities are uncompromised by premature decisions, judgment errors, or a poor implementation plan.Since some occupational specialties require greater or different types of strength, an answer to the first hurdle is—as emphasized in many articles—to develop specific physical performance standards dictated by the requirements of each specialty. In the Marine Corps today, for example, a male Marine heading into the infantry need only pass the PFT and Combat Fitness Test (CFT). Minimum PFT requirements for a 17-26 year-old man consist of at least three pull-ups, 50 sit-ups, and a 28-minute three mile run.* Should that become the standard for the ground combat arms? If not, what should it be?

If new, more rigorous standards are needed, they should be developed, and individuals considered must be able to perform as required. If this results in no women in some units, so be it. Likewise, fewer men may qualify if new standards are tougher than the minimum on the current PFT. Given the level of attention in this area, perhaps male PFT minimums should be re-evaluated as the baseline for entry into all military occupational specialties (MOSs). Regardless, the final result should contain no quotas or gender-norming; if specific physical requirements are dictated by a job, that standard should apply universally to all who hold that MOS.

Along with equal rights comes equal responsibility; we must bear this in mind as well. Just as men cannot choose, neither should women. Anyone who is physically and mentally qualified should be considered for all applicable MOSs. And women should be required to register for the Selective Service. If this gives future elected leaders pause before they commit the military to prolonged conflict, it should not; they should be weighing all options with eyes wide open anyway.

In every other field of government and public service, Americans can advance on merit, without regard for race, gender, or religion. The removal of the Combat Exclusion Policy allows the military to continue that tradition by allowing those who are qualified and who desire to serve to meet the challenges we face as a nation in any way possible.

*He must perform slightly better than the minimum in at least one category in order to achieve 135 points to pass. The minimums listed add up to 105 points.