The head of naval forces in the Middle East said Chinese actions in the region don’t pose a threat today but could lead to challenges down the road, with China laying the groundwork to gain economic and military leverage over countries in the Horn of Africa and the Arabian Peninsula. END_OF_DOCUMENT_TOKEN_TO_BE_REPLACED

Sea mines are historically the most dangerous threat to naval vessels. Since World War II, 15 U.S. Navy ships have damaged or destroyed from mines. Compared to torpedoes, small boat attacks and missiles, mines have caused more than four times more damage to U.S. Navy ships. Though the threat is well known, the mine countermeasure enterprise has suffered in recent years. Specifically, the U.S. Navy’s Avenger class minesweepers have had systemic maintenance and performance shortfalls. In the last year, the U.S. has moved the bulk of its minesweepers to its Fifth Fleet headquarters in Bahrain and this month has started the largest mine countermeasure exercise of its kind in the last several decades. International Mine Countermeasures Exercise (IMCMEX) 12 is currently ongoing, a partnership between the U.S. and almost 30 other countries. The U.S. Naval Institute spoke with Rear Adm. Ken Perry on Sept. 21 about the exercise, the health of the minesweeper fleet and what the exercise has to do with Iran.

Q: Could you give us a run down of the exercise?

A: The purpose is to demonstrate interoperability with our international partners to demonstrate our commitment to freedom of navigation and our ability to defend it against mine threats in particular. Our ability to conduct mine counter measure operations and mine clearance operations effectively. We had a very successful conference, a symposium, over the last couple of days it included naval leaders from the participating countries as well as industry representatives officials and other stake holders in freedom of navigation and maritime commerce and mine clearance and mine warfare capabilities. So with that symposium successfully conducted we transferred to the harbor phase where we have conducted a number of shipboard orientations for the participants including senior naval officials aboard the ships. 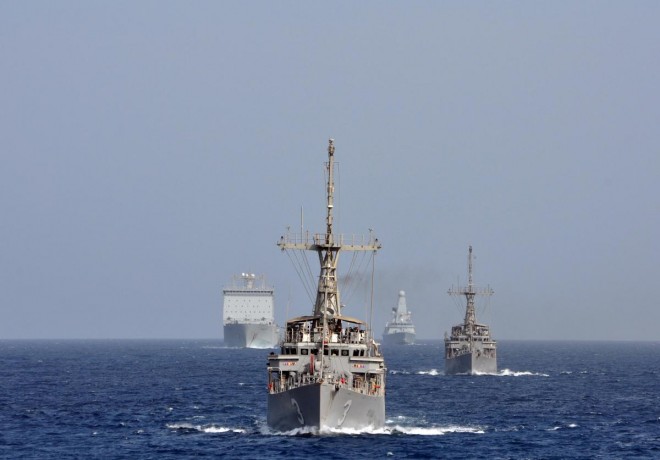 We are sailing now toward the at-sea maneuvers where we will conduct a number of at mine counter measure evolution involving aircraft and surface ships and under sea forces, divers unmanned and under water vehicles.

END_OF_DOCUMENT_TOKEN_TO_BE_REPLACED

Tension levels between Iran and the U.S. are high after Iranian officials voiced threats to cut off the Strait of Hormuz with sea mines in December. As the U.S. and Israel become more vocal about limiting Iran’s ability to develop its nuclear program, Iran has threatened to disrupt the oil supply that passes through the strait. From miniature submarines, to mines and the U.S. Navy’s response what follows is an analysis of the threat Iran could potentially pose to merchant and naval vessels. ~Editor, Sam LaGrone

A U.S. Naval Institute overview of Iranian naval forces and capabilities and U.S. forces in the Persian Gulf. Information from the upcoming Combat Fleets of the World 16th Edition, Jane’s World Navies, the U.S. Navy and globalsecurity.org.
Icons from mapicons.nicolasmollet.com