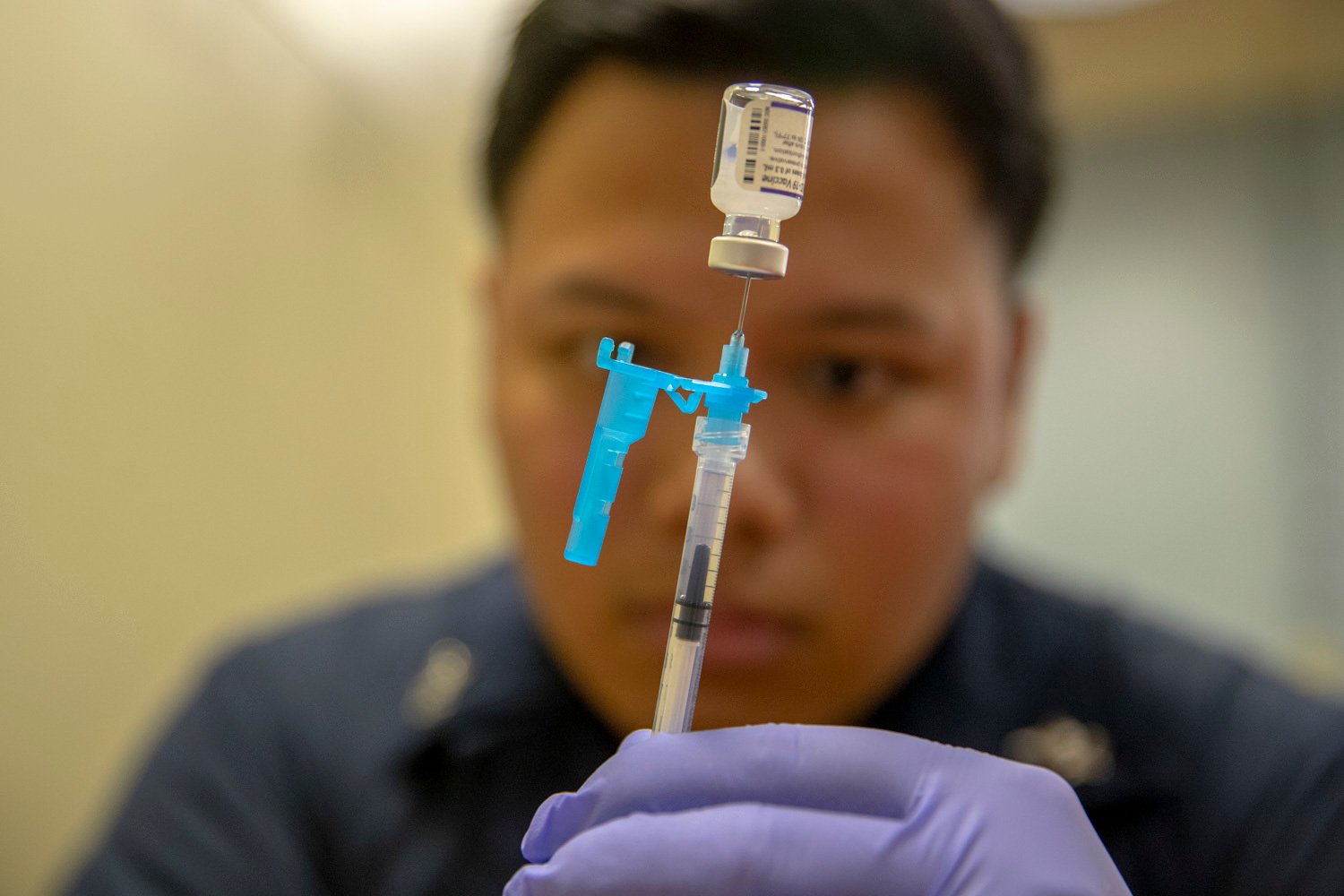 The Pentagon has no ready answers on how the Department of Defense would implement pending legislation that would allow service members to refuse the COVID-19 vaccine without facing separation, officials said this week.

Congressional Republicans negotiated with the Democrat-led House and Senate to include language that would rollback the military’s COVID-19 mandate as part of the Fiscal Year 2023 National Defense Authorization Act, according to a bill released late Tuesday.

The new law would nullify the mandate put in place by Secretary of Defense Lloyd Austin in 2021 that required service members to be vaccinated against COVID-19 using either Pfizer or Moderna’s mRNA vaccine, or the one-shot Johnson and Johnson or Novavax vaccines.

Section 525 of the NDAA, released Tuesday night, requires the DoD to remove the COVID-19 mandate.

“We believe in the importance of the Secretary following public health guidance in order to protect the health and welfare of servicemembers and their families, to include mandating vaccines based on readiness requirements,” according to the bill language.

Under the mandate, those who did not comply would be separated. As of Nov. 28, the Navy separated 2,064 sailors, both reservists and active-duty, for failure to get vaccinated against COVID-19. As of Dec. 1, the Marine Corps separated 3,717 Marines.

The language in the NDAA leaves it up to the services to determine if they will reinstate anyone separated for refusal to take the vaccine. It is not clear how the Navy or Marine Corps will handle the service members who were separated. The Navy referred questions about reinstating sailors to the Office of the Secretary of Defense.

It is also unclear if sailors and Marines can be deployed. Currently, any sailor or Marine with a pending or confirmed exemption from the vaccine cannot be deployed due to not having the vaccine, even if they are still part of the Navy.

Sabrina Singh, deputy Pentagon press secretary, declined to answer a question about the deployment status of troops if the vaccine mandate falls, saying she could not comment on pending litigation when asked by reporters on Wednesday. The Pentagon’s legislative team is working with members of the House and Senate to express the secretary of defense’s desire that the vaccine mandate stays.

“We have our legislative team that continues to work with members on the Hill, members of Congress in both chambers,” Singh said. “That’s part of their role and responsibilities and engaging with members on the Hill to make sure that they know where the Secretary’s priorities are. […] I think the Secretary was pretty clear and forceful and his response over the weekend when he said that he supports continuing the vaccine mandate in the NDAA.”

Also up in the air is the question of the sailors who filed religious exemption requests for the vaccine. A decision by a federal judge in March put a preliminary injunction in place barring the Navy from separating them. It is not clear how the NDAA will affect the lawsuit, which is expected to be heard in February in the Fifth Circuit Court of Appeals.

Secretary of the Navy Carlos Del Toro spoke against removing the mandate at a Navy League event Tuesday, raising concerns such as what happens to sailors who need to go to countries with strict vaccine requirements.

Congress needs to understand the secondhand consequences of their decisions, the Navy secretary said.

“But unquestionably it’ll create almost two classes of citizens in our services,” Del Toro said. “Those that can’t deploy and those that can deploy. And that creates all sorts of problems.”

White House Press Secretary Karine Jean-Pierre called removing the mandate a mistake during a press conference Wednesday. The president will weigh the entirety of the NDAA, once passed, before deciding if he’ll sign it. She did not say if he will veto due to the removal of the COVID-19 vaccine mandate.

“What we saw, what we think happened here is Republicans in Congress have decided that they rather fight against the health and well-being of our troops than protecting them, and we believe that it is a mistake,” Jean-Pierre said.

During a Defense Writers’ Group breakfast, Wednesday, Marine Corps commandant Gen. David Berger said that the mandate was political, but vaccination is not. There are multiple vaccines service members receive because it’s required for military readiness. In general, there are nine vaccines required by the military, while others may be needed depending on the geographic area of service.

“Marines know that when their leadership says you need to do something because that’s important to warfighting and your own health, the politics part of it isn’t a part of that,” Berger said.

One of the reasons Republican leaders had for striking the mandate say requiring the vaccine hurts military recruitment and retention. Singh told reporters that there were a host of other reasons, including competition with big companies and eligibility concerns, that were leading to recruitment issues besides the minimal effect of the mandate.

There are recruiting issues from the vaccine mandate, Berger said during a Reagan National Defense Forum panel Saturday. But that is mostly tied to the misinformation about the vaccine preventing people from getting it, he said.

Staver welcomed the language in the NDAA, calling the original vaccine mandate unconstitutional.

“It has caused an incredible abuse of the service members of all branches of the military. It has not been effective,” Staver told USNI News. “It has undermined morale, it has been used to punish honorable individuals who are irreplaceable.”

Those who were separated due to vaccine refusal should be reinstated, Staver said. He plans to continue with the lawsuits against the military due to the punishment of his clients for not taking the vaccine.

Even if the services do reinstate service members separated over the vaccine, it is unclear what positions they will be able to hold or if they will be deployable.

The bill language also does not address if the military would need to address service members who chose to retire or leave the service instead of getting vaccinated.