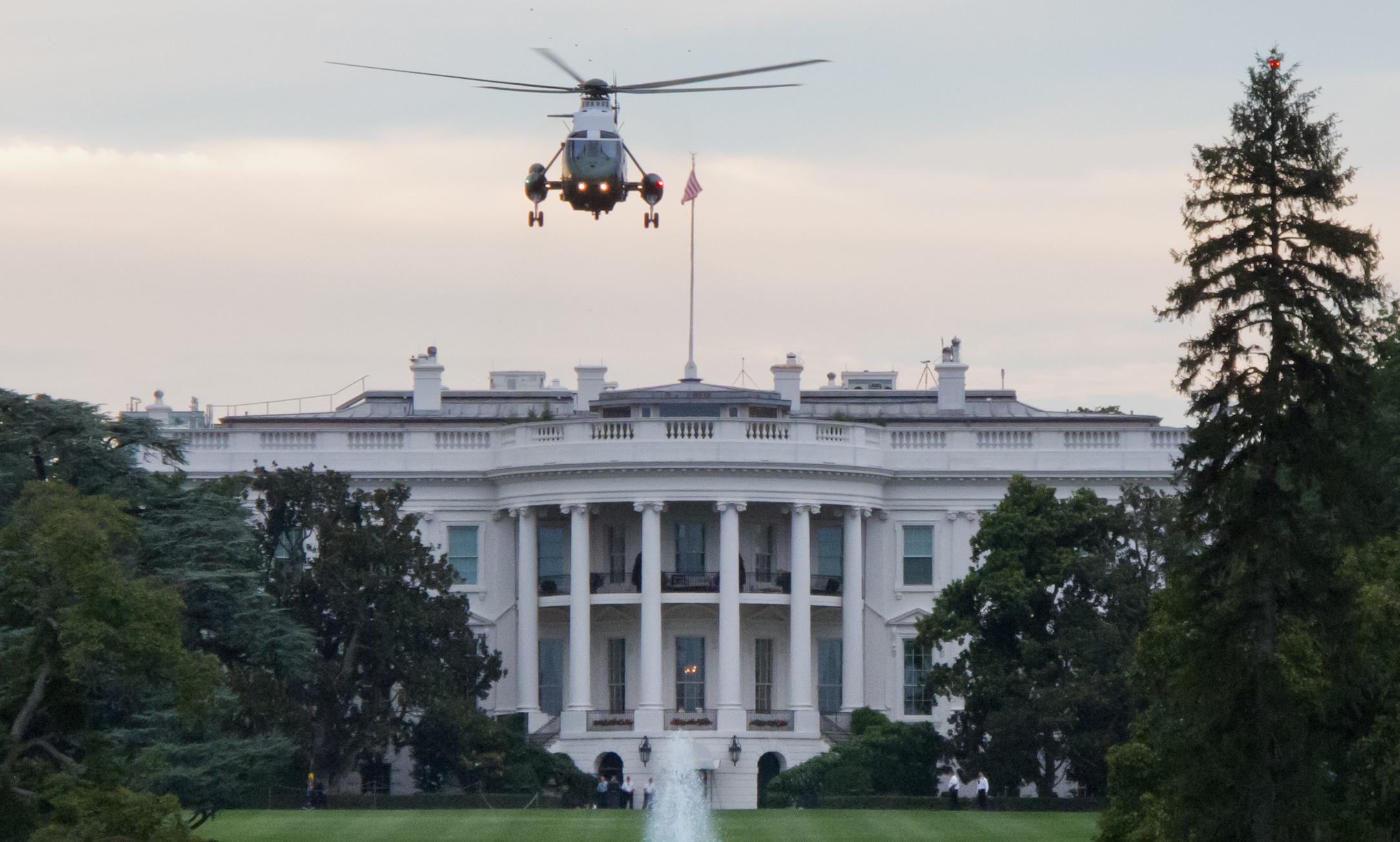 The People’s Republic of China’s intent to reshape the international order is the United States’ biggest geopolitical challenge for the next decade, National Security Advisor Jake Sullivan said on Wednesday.

Beijing presents an “increasingly global challenge,” not only to the United States but also to nations that want to preserve a rules-based order of international relations, Sullivan said, speaking at Georgetown University’s Walsh School of Foreign Service at the rollout of the public version of the National Security Strategy.

“Many of our allies and partners, especially in the Indo-Pacific, stand on the frontlines of the PRC’s coercion and are rightly determined to seek to ensure their own autonomy, security, and prosperity. We will support their ability to make sovereign decisions in line with their interests and values, free from external pressure, and work to provide high-standard and scaled investment, development assistance, and markets,” according to the strategy.

The strategy, as it appears in the unclassified version, toward China is threefold:

The new strategy gave a brief summary of how the U.S. would operate under a concept of “integrated deterrence” across the whole of government defined as “the seamless combination of capabilities to convince potential adversaries that the costs of their hostile activities outweigh their benefits.” 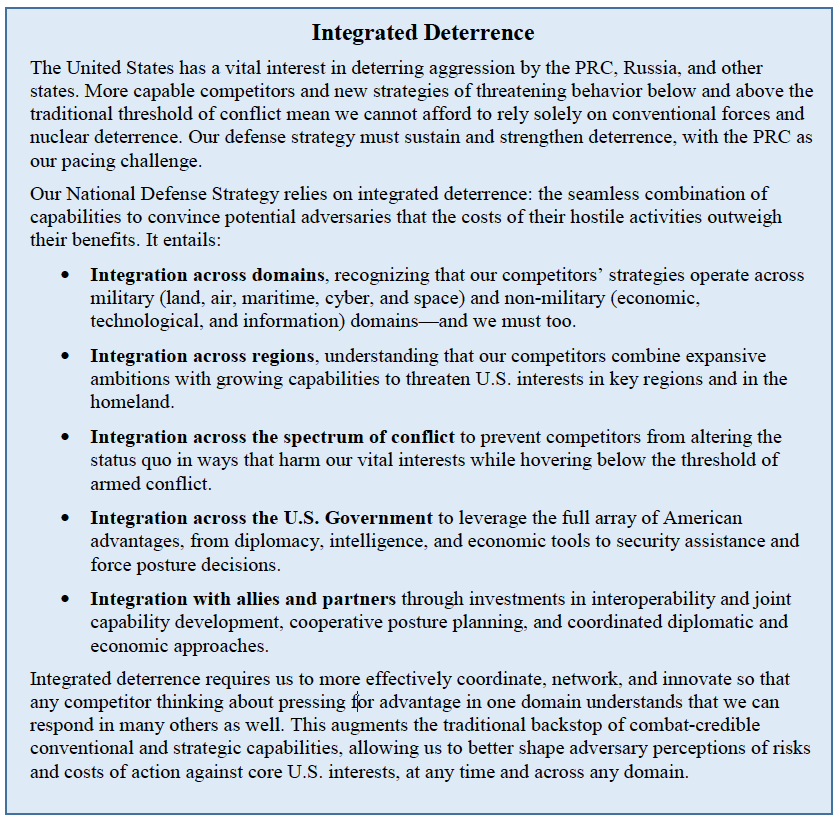 In his remarks, Sullivan repeated how valuable allies and partners are in carrying out this strategy, adding that the U.S. does not want them to choose sides as in the Cold War.

“We are not engaging each nation as a proxy battleground,” he said earlier in a press briefing and repeated at Georgetown.

In shaping the National Security Strategy, the Biden administration included a new stance toward Russia, given its February invasion of Ukraine. The invasion delayed the strategy’s release as it was originally expected to be released in February, the month Russia launched its attack on Kyiv, Sullivan said.

Russia under Vladimir Putin “threatens to drag us back into the darkest days” of the Soviet Union and the Cold War, Sullivan said.

The U.S. did not want a direct confrontation with Russia, but did want to weave together a coalition of like-minded nations to provide Ukraine with military and financial assistance for the long term, he said. It also meant imposing stricter sanctions on Russian businesses – particularly in energy and finance and individuals in the ruling elite.

“Russia has gotten the exact opposite of what it wanted” in the response from NATO, the European Union and nations in the Indo-Pacific to the invasion, Sullivan said. This included “quiet work to shepherd Finland and Sweden into NATO.”

The strong support is not without risk. “We take the threats seriously” that Russia might use tactical nuclear weapons to prevail as the invasion stalled and the Ukrainians launched a major counter-offensive, he said.

The U.S. “will not be intimidated” by threats of nuclear blackmail, he said.

One lesson from Ukraine’s determination to fight comes in showing other nations that “democracy is a form of government worth defending,” he said.

“We will support Ukraine as long as it takes,” Sullivan said. The strategy itself calls for continued economic, development and humanitarian aid even after the fighting ends.

Sullivan cited the agreement between Australia, the United Kingdom and the United States [AUKUS] to build a nuclear-powered submarine fleet for Canberra and share developments in technologies as an example of allies and partners working more closely together as conditions changed in the Indo-Pacific.

The strategy’s focus on deterrence again commits to modernizing the nuclear triad, its command and control systems, and infrastructure “and strengthening our extended deterrence commitments to allies” as the top security priority. It also notes that by the 2030s for the first time the United States will be facing two major nuclear powers with triad capabilities of their own.

In his remarks and the strategy itself, Sullivan warned that competitors are looking for ways to eliminate any edge the United States and its allies might have in a broad array of new and emerging technologies either through spyware and other cyber intrusions or existing trade agreements on products like microchips.

“We are therefore modernizing and strengthening our export control and investment screening mechanisms, and also pursuing targeted new approaches, such as screening of outbound investment, to prevent strategic competitors from exploiting investments and expertise in ways that threaten our national security,” according to the strategy.

Sullivan added at the same time the United States’ strategy must also take on the equally serious “transnational challenges” of climate change, energy, health and food insecurity as well as terrorism and arms control “in this decisive decade.”

Washington “will work with any nation” that backs the U.N. Charter on sovereignty and the importance of freedom of navigation on the sea and overflights, Sullivan said. He also saw an opening for areas of cooperation between the United States and China on issues that affect both.

Sullivan asked rhetorically “how do you manage cooperation and competition” between great powers, acknowledging “there’s not a perfect mathematical formula” to follow.