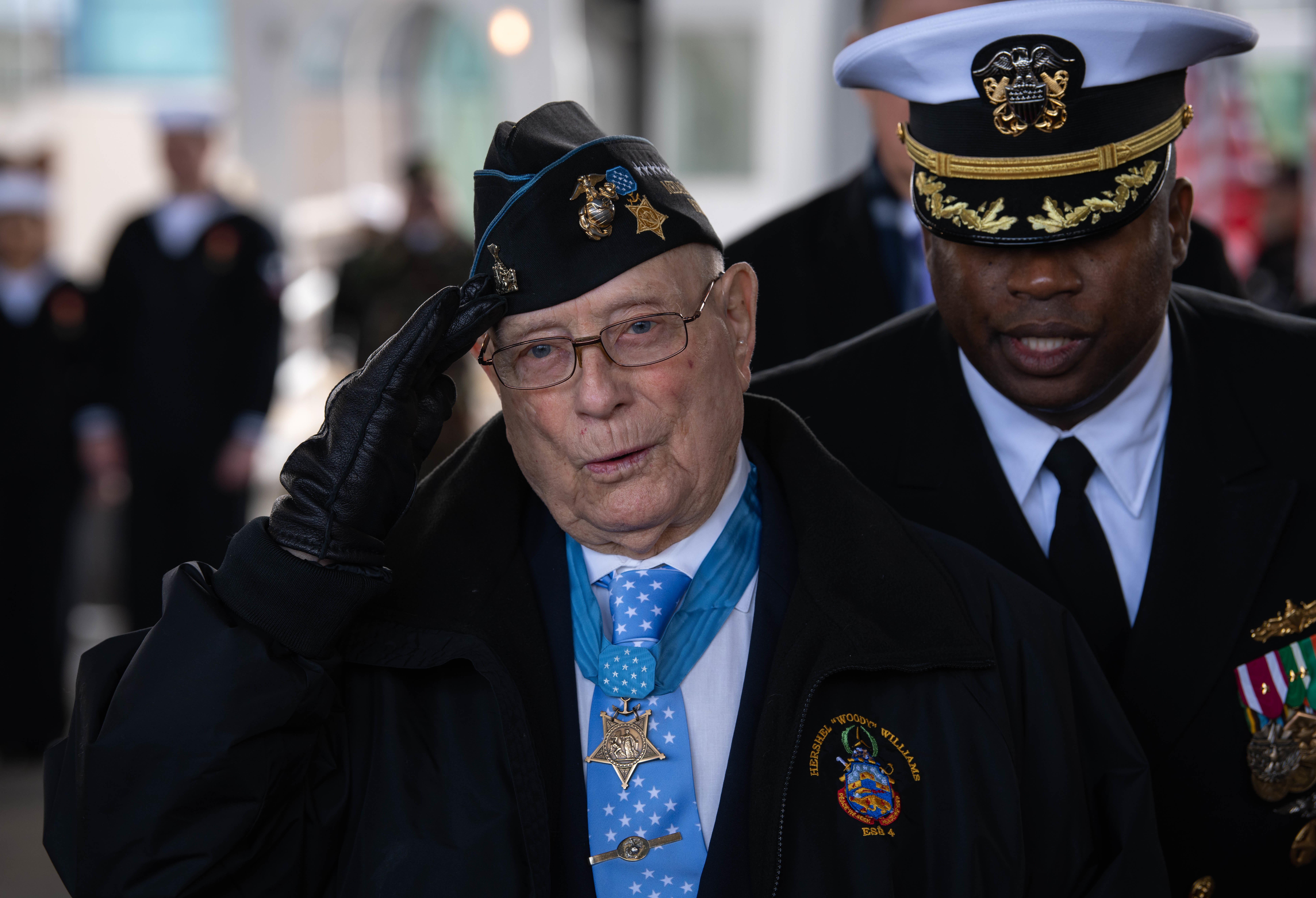 Hershel Woodrow Williams, Retired Chief Warrant Officer Four and Medal of Honor recipient, salutes as he is introduced to the stage along with other members of the ship commissioning committee, March 7, 2020 in Norfolk, VA. U.S. Marine Corps Photo

Williams, 98, was surrounded by his family when he died, the Marine Corps said in a news release.

“On behalf of all Marines, Sgt. Maj. Black and I are heartbroken to learn of Woody’s passing. From his actions on Iwo Jima to his lifelong service to our Gold Star Families, Woody has left an indelible mark on the legacy of our Corps,” Marine Corps Commandant Gen. David Berger said in the release. “As the last of America’s “Greatest Generation” to receive the Medal of Honor, we will forever carry with us the memory of his selfless dedication to those who made the ultimate sacrifice to our great Nation. The Marine Corps is fortunate to have many heroes, but there is only one Woody Williams. Semper Fidelis, Marine.”

Williams enlisted with the Marine Corps and served in the Battle of Iwo Jima, according to his website. He received the Congressional Medal of Honor on Oct. 5, 1945, for his commitment to other service members and his heroism in the battle.

“He will be remembered not only for his heroism at the Battle of Iwo Jima, but also as an American Veteran who spent his remaining years selflessly dedicating his life to his community, the Veterans Affairs, and to Gold Star families,” the Office of the Master Chief Petty Officer wrote in a statement on Facebook. 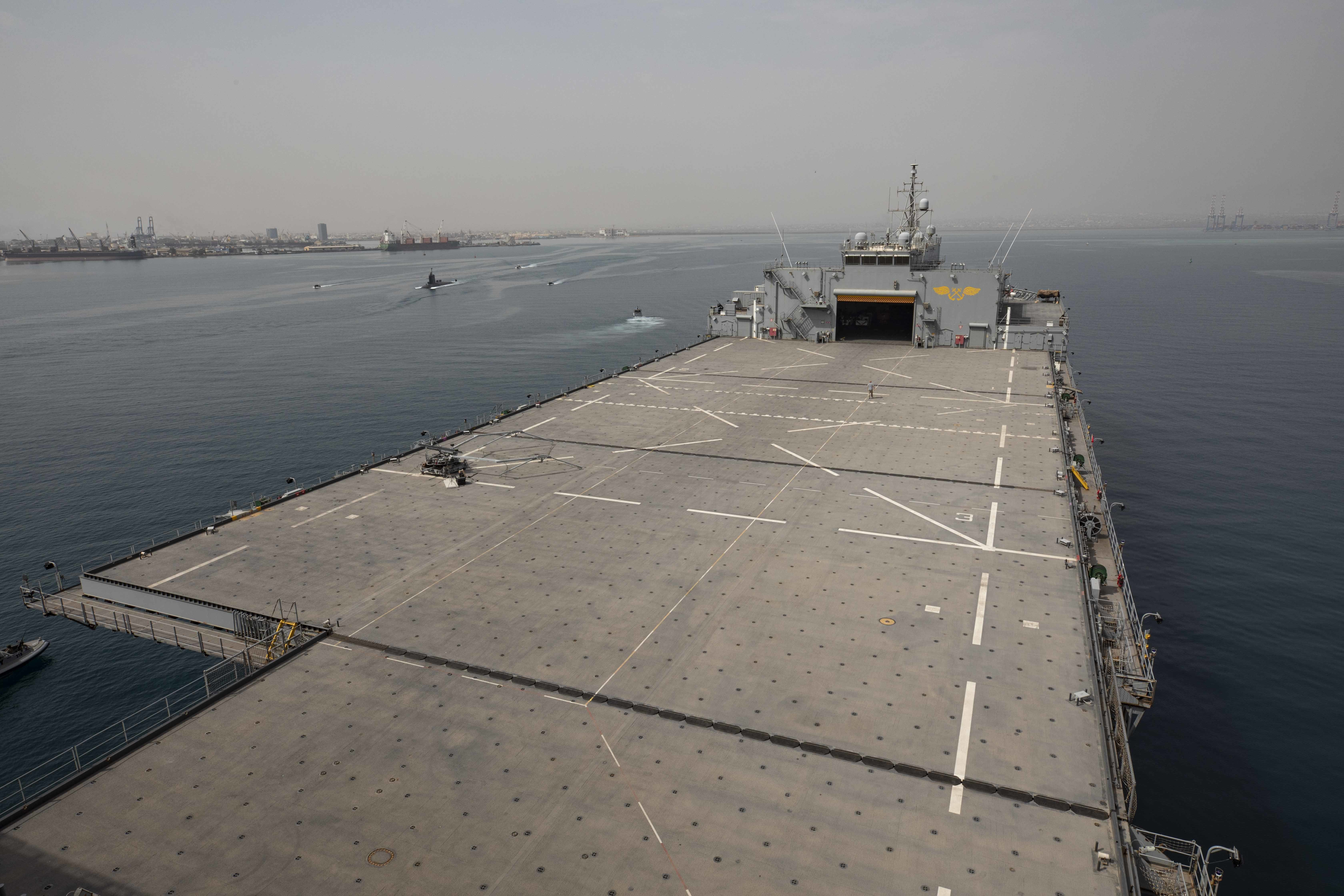 Williams, of Quiet Dell, West Va., trained as a demolition sergeant and was deployed three months after he enlisted, according to a Department of Defense feature about him. Williams participated in the battle to retake Guam in 1944 before getting sent to Iwo Jima.

When he arrived at Iwo Jima, he was one of several demolition sergeants, but that number dwindled down until he was the only one left. As a demolition sergeant, one of Williams’ responsibilities was to take out pillboxes that were protecting Japanese airfields.

“Bazookas and that sort of thing had no effect on them, because they were so thick and well built,” Williams said in a 2017 interview, according to DoD. “The only way to actually eliminate the enemy inside those pillboxes was by flamethrower.”

As the only demolition sergeant left at Iwo Jima, Williams went forward with four riflemen to protect him and took out seven pillboxes. That helped to neutralize the Japanese strongholds, according to the DoD feature.

“That made a hole big enough that [the company] could go through and get behind any other pillboxes that were in that area,” Williams told the Department of Defense. “Once you got behind the pillboxes, then we had the advantage.”

Former President Harry Truman awarded Williams the Medal of Honor for those actions.

After his time in the service, Williams created the Woody Williams Foundation, which builds Gold Star family memorials. There are now 103 memorials across the United States, according to the website. Another 72 are planned.