The following is the June 6, 2022, Congressional Research Service In Focus report, U.S. Security Assistance to Ukraine.

The United States has been a leading provider of security assistance to Ukraine, both before and after Russia renewed its invasion of Ukraine on February 24, 2022. From 2014, when Russia first invaded Ukraine, through June 1, 2022, the United States has provided more than $7.3 billion in security assistance “to help Ukraine preserve its territorial integrity, secure its borders, and improve interoperability with NATO.” Since the start of the 2022 war, the Biden Administration has committed a total of more than $4.6 billion in security assistance to “provide Ukraine the equipment it needs to defend itself.”

Overview of Programs Since 2014

The United States has used a variety of security assistance programs and authorities to help build the defensive capacity of the Ukrainian Armed Forces (UAF) through train, equip, and advise efforts across multiple spending accounts. Prior to the 2022 war, the two primary accounts were the State Department’s FMF (22 U.S.C. §2763) and DOD’s USAI (P.L. 114-92, §1250). 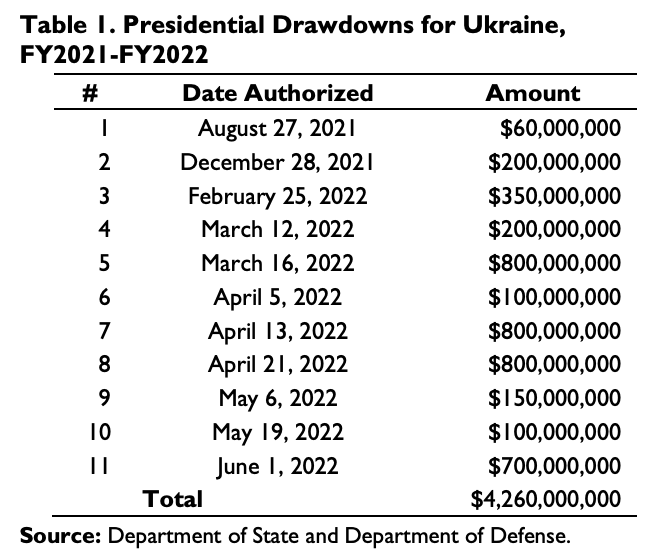 The United States also has been providing defense items to Ukraine via Presidential Drawdown Authority (PDA), by which the President can authorize the immediate transfer of articles and services from U.S. stocks without congressional approval in response to an “unforeseen emergency” (22 U.S.C. §2318(a)(1)). Since August 2021, the Biden Administration has authorized 11 drawdowns valued at $4.26 billion

Through the Joint Multinational Training Group-Ukraine, established in 2015, the U.S. Army and National Guard, together with military trainers from U.S. allied states, provided training, mentoring, and doctrinal assistance to the UAF before the war (at a training facility in western Ukraine that was targeted by a Russian missile strike in March 2022). This training mission was suspended at the outset of Russia’s invasion. In April 2022, DOD announced it would resume training Ukrainian personnel, outside Ukraine, specifically to operate U.S. and allied systems. Separately, U.S. Special Operations Forces have trained and advised Ukrainian special forces.