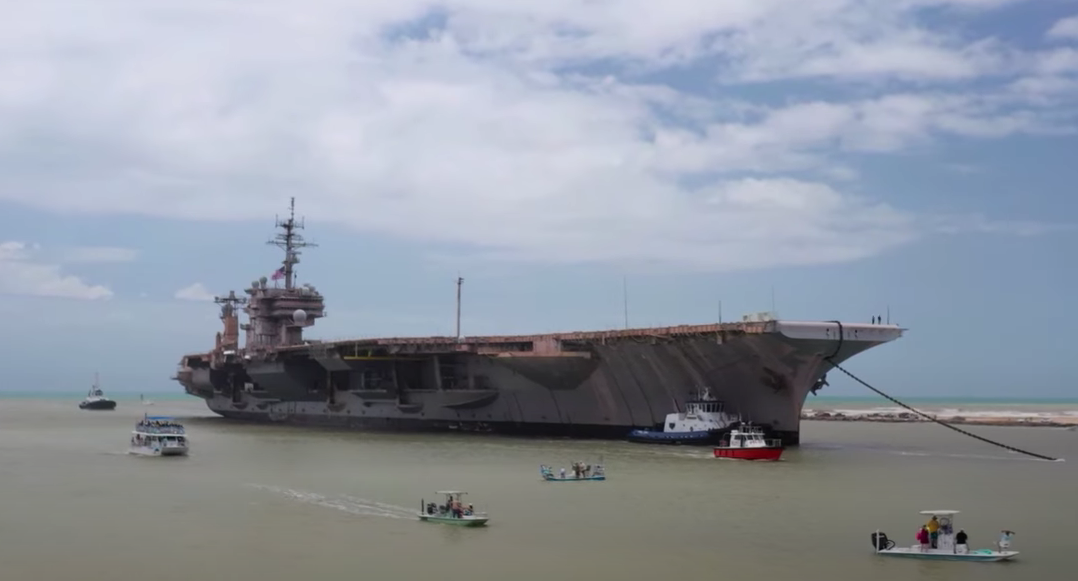 Screenshot of YouTube video from May 31, 2022 of the hull of Kitty Hawk arriving in the Port of Brownsville, Texas.

The Navy’s last conventional super carriers arrived in Brownsville, Texas this week after taking one last towed sail before getting scrapped.

The former USS Kitty Hawk (CV-63) reached South Padre Island, near the Texas-Mexico border, on Tuesday as veterans of one of the Navy’s last conventional carriers looked on, according to a report in The Brownsville Herald.

The ship is now at International Shipbreaking Limited, which bought the supercarrier for a penny last year to dismantle and recycle. The shipyard will also scrap the former USS John F. Kennedy (CV-67), similarly purchased for a penny.

A spokesperson for International Shipbreaking Limited said the yard will begin “actual structural dismantling in July” and plans to finish the dismantling process in about 18 months. The expected completion date is December 2023.

Kitty Hawk left Bremerton, Wash., on Jan. 15 to make its last sail to Brownsville ahead of the dismantlement, Kitsap Sun reported at the time.

One of the last conventionally-powered carriers, the former Kitty Hawk was commissioned in 1961 and decommissioned in 2009. The super carrier took part in conflicts ranging from the Vietnam War to Operation Iraqi Freedom in 2003. At the time, Kitty Hawk was the Navy’s forward-deployed ship in Japan, but deployed to the Persian Gulf to help at the start of the war in Iraq. It was the last time a Japan-based carrier would do so until 2021, when USS Ronald Reagan (CVN-76) deployed to the Middle East.

International Shipbreaking Limited’s 2021 purchase of Kitty Hawk dealt a final blow to some veterans’ desires to make the ship into a museum, similar to the five other aircraft carrier museums throughout the United States, USNI News previously reported. One problem facing efforts to make the ship a museum was finding a city to house the super carrier that did not already have an aircraft carrier museum, Ryan Szimanski, the executive director of the Historic Naval Ships Association, told USNI News at the time.

James Melka, a former Kitty Hawk sailor who tried to turn the ship into a museum, said last year that he planned to watch the carrier leave Bremerton and arrive in Brownsville, Texas.

“Watching the Kitty Hawk, there will be a lot of tears,” he said at the time.