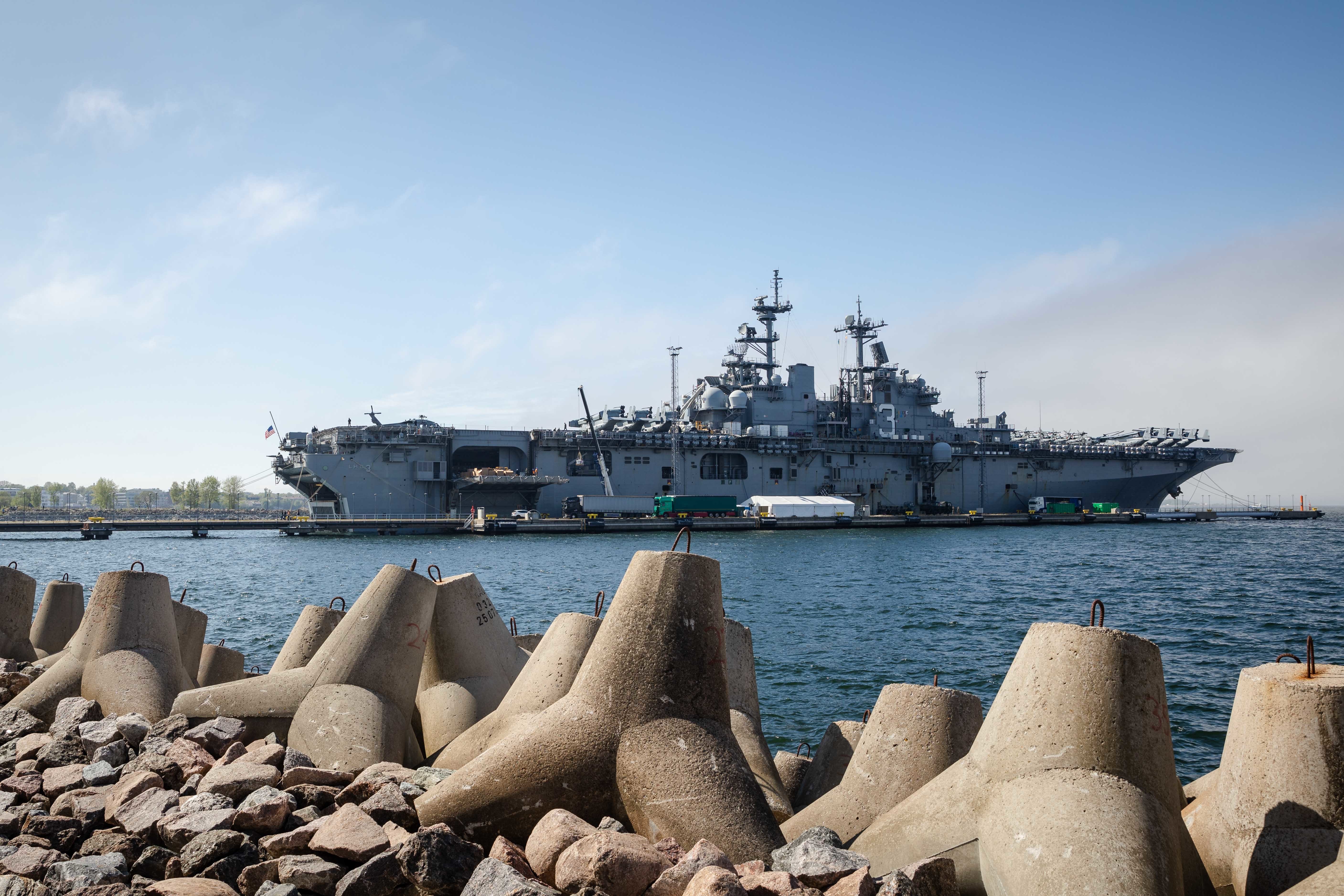 At least three U.S. warships are operating in the Baltic Sea ahead of two weeks of international drills in the region, according to U.S. 6th Fleet.

Gunston Hall and Gravely made a port call in Helsinki, Finland on Friday.

“Prior to their port visit, Gunston Hall and Gravely conducted extensive operations with Allies and Partners in the Baltic Sea, including a series of maneuvering exercises with the Finnish and Swedish navies,” reads a statement from 6th Fleet.

Last week, Kearsarge and elements of the 22nd Marine Expeditionary Unit drilled in the Estonian-led Siil – Estonian for hedgehog – exercise around the island of Saaremaa, the city of Pärnu on Estonia’s western coast and the town of Võru, about 15 miles from the Russian border.

“The exercise scenario will consist of an amphibious landing followed by a multi-day force on force exercise, as well as the execution of a vertical assault raid,” reads a Navy release about the Estonian-led exercise.

Since the late February invasion of Ukraine by Russia, the U.S. has surged ships to Europe. 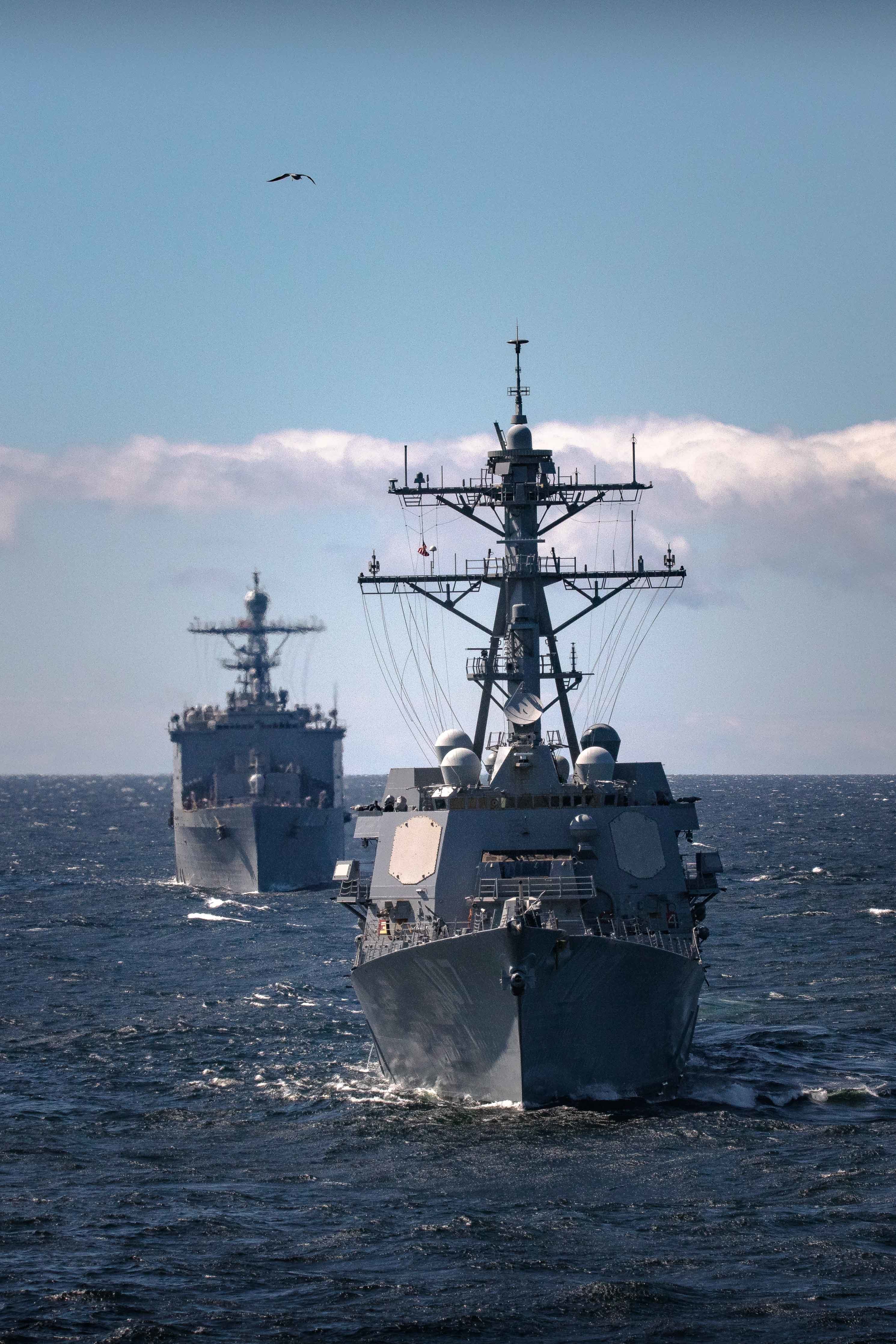 Guided-missile destroyer USS Gravely (DDG-107) and the Whidbey Island-class amphibious dock landing ship USS Gunston Hall (LSD-44) sail in formation behind the Wasp-class amphibious assault ship USS Kearsarge (LHD-3) during a maneuvering exercise with the Finnish and Swedish navies in the Baltic Sea on May 17, 2022. US Navy Photo

The drills with the Baltic nations come ahead of the NATO-led BALTOPS 22 exercise, which will be hosted in Sweden this year.

In addition to the U.S., countries in the exercise include Belgium, Bulgaria, Denmark, Estonia, Finland, France, Germany, Latvia, Lithuania, the Netherlands, Norway, Poland, Sweden, Turkey and the United Kingdom.

“Over 45 ships, more than 75 aircraft, and approximately 7,000 personnel will participate in BALTOPS 22,” reads a NATO release.
The exercise will include “amphibious operations, gunnery, anti-submarine, and air defense exercises, as well as mine clearance operations, explosive ordnance disposal, unmanned underwater vehicles, and medical response.”

The 51st iteration of the exercise comes as long-time participants Sweden and Finland have started the process to join NATO amidst Russia’s ongoing invasion of Ukraine. Swedish officials, in particular, have made calls for the U.S. to operate more in the Baltic, a move that Navy and Marine Corps leaders have endorsed, reported USNI News.

“I look forward to the prospect of Sweden and Finland joining NATO and I foresee a day when we’re actually increasing our maritime operations in the Baltic Sea,” Secretary of the Navy Carlos Del Toro told the House Appropriations defense subcommittee earlier in May.

While the majority of the 30-nation alliance supports the entrance of the two Nordic countries, Turkey continues to raise objections over both Sweden’s and Finland’s protection of what Ankara calls terrorist organizations, including the Kurdistan Workers Party (PKK), and the halting of arms exports.

On Tuesday, Turkish foreign minister Mevlut Cavusoglu said that Turkey would not allow Finland and Sweden to join unless Helsinki and Stockholm agree to “halt their support for the PKK and other groups, bar them from organizing any events on their territory, extradite those sought by Turkey on terrorism charges, support Ankara’s military and counter-terrorism operations, and lift all arms exports restrictions,” according to Reuters.