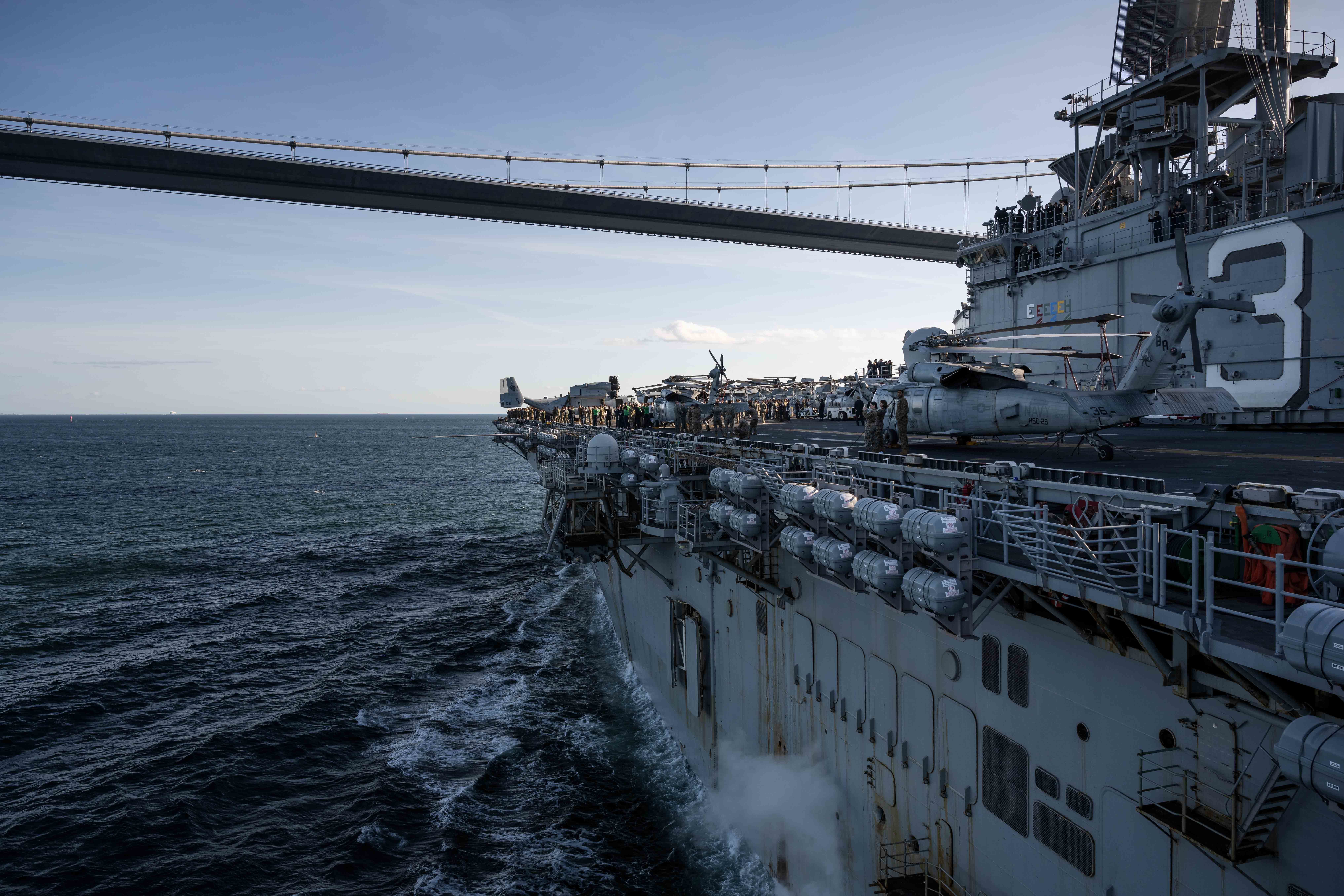 USS Kearsarge (LHD-3) transits through the Danish Straits and enters the Baltic Sea on May 13, 2022. US Navy Photo

Swedish officials are requesting a larger U.S. naval presence in the Baltic Sea as part of the ongoing diplomatic push for Sweden and Finland to join NATO, two defense officials told USNI News on Thursday.

The Swedish contingent now in Washington is asking to increase bilateral and multilateral exercises with the U.S. Navy and Marine Corps and flow more ships into the Baltic, the two defense officials said.

Defense Secretary Lloyd Austin and Swedish Defense Minister Peter Hultqvist met in the Pentagon on Wednesday as the formal submission of Sweden and Finland’s membership to NATO occurred the same day in Brussels.

“They underscored the importance of security and stability in Europe and transatlantic unity,” according to a Wednesday readout of the meeting.
“The two looked forward to deepening bilateral cooperation.”

The Pentagon is now considering how the U.S. could increase its naval presence in the region, the officials told USNI News.

The request comes as U.S. warships in Europe are at a level not seen in years. Ahead of Russia’s late February invasion of Ukraine, the U.S. began sending more ships to both the Baltic and the Mediterranean seas for deterrence missions. In December, Austin ordered the Truman Carrier Strike Group to stay on station in the Mediterranean and will remain until August, USNI News reported.

As of Monday, 28 U.S. warships were deployed to Europe, compared to 20 in early January, according to the USNI News Fleet and Marine Tracker.

Ahead of the current push for NATO membership, momentum has been building for the Navy and Marines to operate in Europe, particularly the Arctic and the Baltic since the 2018 deployment of the Harry S. Truman Carrier Strike Group to the Arctic.

On Wednesday, Navy Secretary Carlos Del Toro told the House Appropriations defense subcommittee, “I look forward to the prospect of Sweden and Finland joining NATO and I foresee a day when we’re actually increasing our maritime operations in the Baltic Sea.”

At the same hearing, Chief of Naval Operations Adm. Mike Gilday said, “during this ongoing conflict with Russia and Ukraine … we’ve had small units, destroyers operating with allies and partners in the High North to put pressure on Russia to make sure that they know that we’re there with capable platforms,” he said.

Marine Corps Commandant Gen. David Berger at the same hearing said the Marines would likely deploy smaller units to the Baltic and the Arctic more often.

“I think yes, in both Alaska and frankly in Europe, we’re going to more frequently deploy smaller units for two to four weeks at a time, absolutely,” Berger said.

The Marine Corps’ new Force Design 2030 vision calls for small units armed with anti-ship weapons to island-hop in the Western Pacific, a strategy that would overlay well on the small islands and archipelagos that surround the coasts of both Sweden and Finland, officials have told USNI News.

Earlier this month, Lt. Gen. Karsten Heckl, the Marine Corps’ deputy commandant for combat development and integration, said the Swedish military has made it clear they’re interested in working more with the U.S.

“She wants us to come up and exercise,” Heckl said of Chief of Swedish Navy Rear Adm. Ewa Skoog Haslum.