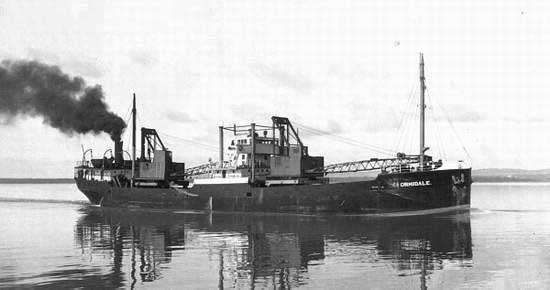 The Valor in the Atlantic Expedition will livestream its survey of the historic wrecks of SS Bluefields, a freighter and U-576, a German submarine.

The remains of each wreck from the Battle of the Atlantic lay only a few football fields apart. Settled about 700 feet below the surface, approximately 30 miles off Cape Hatteras, N.C., the wrecks are believed to be the only example on the East Coast from World War II “where the victim and aggressor are lying side by side,” the narrator for the Global Foundation for Ocean Exploration livestream said Monday.

The foundation is leading the “Valor” expedition and leaves its activities posted on its website. The livestream will continue through Wednesday.

Bluefields, operated by a Nicaraguan firm, was part of KS-520 convoy that left Norfolk, Va., and headed toward Key West, Fla., when it was attacked on July 15, 1942.

The two vessels were nominated to the National Register of Historic Places in 2015 after their discovery the year before. The search began in 2011.

In Monday morning’s livestream, Bluefields, built at Manitowoc, Wis., in 1917, could be seen upright. Visible on the deck were a truck engine, axle, wheels with tires still on.

Remotely operated vehicles Yogi and Guru passed the wreckage with special cameras to provide a 360-view of where masts and cargo booms have fallen to the deck. The steel hull appears to be intact at least to the deck level.

“We’re finding out what’s in the hold [that is] not on the cargo list. It’s sort of totally untouched,” the narrator said.

The now open holds can be clearly seen using the ROVs’ sophisticated cameras.

The ROVs are controlled by crew members aboard the National Oceanic and Atmospheric Administration’s Nancy Foster.

“We still have to be very careful here” with the vehicles to ensure they don’t disturb the shipwrecks or damage the expedition’s equipment, the narrator said several times.

The 250.5-foot freighter was carrying war materiel, including oil as well as household goods, when it sank.

The 1942 convoy consisted of 19 merchantmen that were being escorted by five Navy and Coast Guard vessels. The U-boat, which had suffered a damage ballast tank two days before, was coming off patrol Hatteras when it spotted the convoy moving at 8.5 knots. The sub fired four torpedoes. Two hit Chilore and another hit J.A. Mowinckle. The last torpedo hit Bluefields amidships on the port side, which sank within minutes. Chilore later sank under tow off Cape Hatteras.

As for the U-576, the damaged submarine was noticed by a sonar ping from a Coast Guard vessel after it surfaced in the middle of the convoy, NOAA reported in its history of the encounter. 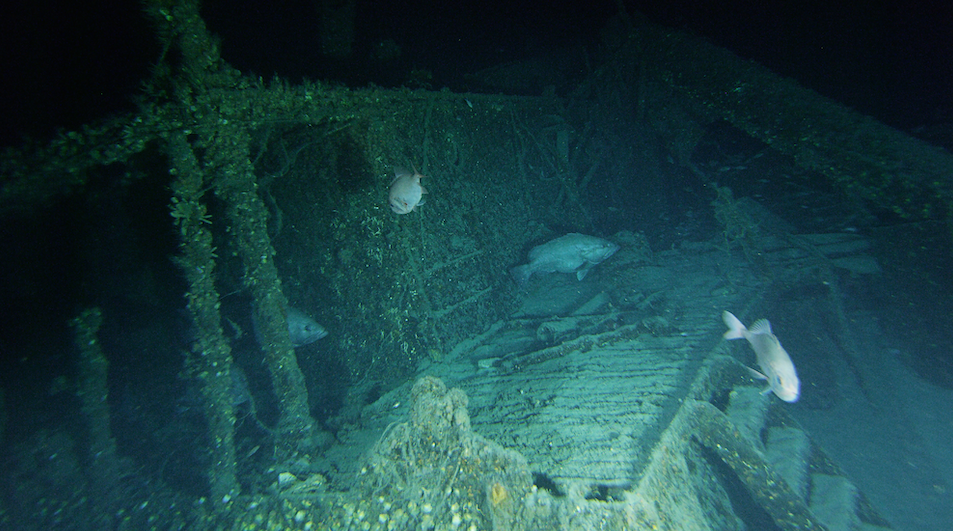 “Immediately the Armed Guard crew on the merchant ship, Unicoi, opened fire and scored a hit. Almost concurrently, two U. S. Navy Kingfisher aircraft straddled the U-576 with depth charges and sent it to the bottom of the sea with all 45 crew members,” according to NOAA’s history of U-576.

Bluefields’ crew did not suffer any casualties, but all 45 crew members of the U-boat died. Germany’s foreign ministry said in a statement to the NOAA in 2014 that the wreck “should, if possible, remain at their site and location to allow the dead to rest in peace.”

The narrator in Monday’s livestream repeated a NOAA historian’s observation that “few people realize how close the war actually came to America’s shores.” He added, “and how close we came to losing.”

The new survey of the Bluefields and U-576 was actually the second leg of the Global Foundation for Ocean Exploration’s project “to explore historic shipwrecks within and surrounding the Monitor National Marine Sanctuary” under its “Valor in the Atlantic” project.

The first leg included livestreaming the new survey of USS Monitor, as well as a number of other ships that went down in World Wars I and II. The videos have remained posted on a number of social media sites as well as the foundations’.

In addition to the survey’s historic purpose highlighting “Valor in the Atlantic,” the ROV dives are also providing direct observation of types and numbers of fish occupying the wrecks.

In a press release, the foundation said the data “will be complemented by fishery echosounders that use sound to ‘remotely sense’ the locations and relative size of fish surround[ing] the shipwrecks.” The information additionally will guide “ecosystem-based management and spatial planning decision[s] to ensure that the reefs and their inhabitants are sustainably used by fishers, divers and other interests.”

Fishery experts aboard Nancy Foster said there are three kinds of “fishing reefs” off the North Carolina Outer Banks – the shipwrecks, like Bluefields, which is very tall and attracts a wide variety of fish; artificial reefs, vessels sunk to attract fish and the natural rocky and sandy reefs than can extend for over a kilometer. The waters and Gulf Stream are heavily used for commercial fishing and attractive to sports fishing.

For example in surveying Monitor as a fishing reef, the livestream narrator said, “we’re very pleased to be back” after 20 years and seeing “healthy coral and predators,” like sharks by the ironclad and snowy groupers by Bluefields.

Partnering with the foundation, headquartered on the Mystic Seaport Museum campus in Connecticut, were four offices from NOAA and the state of North Carolina’s office of State Archaeology.