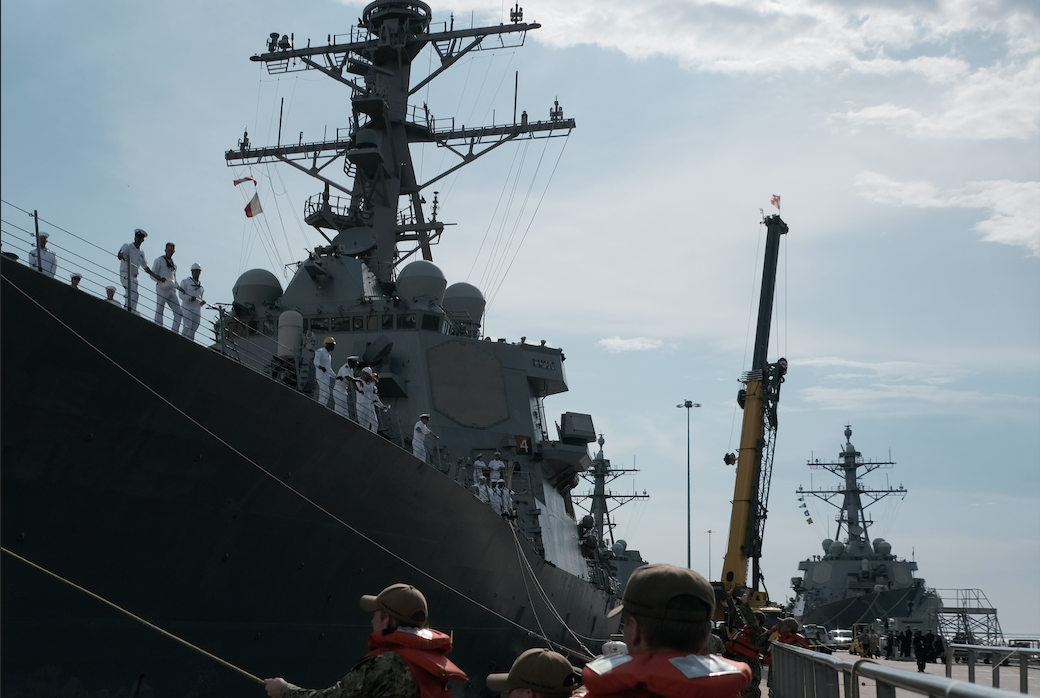 A guided-missile destroyer coming into Norfolk, Va., in 2021. US Navy Photo

The commander of Arleigh-Burke guided-missile destroyer in a legal battle with the Navy over refusing the COVID-19 vaccine on religious grounds has been temporarily assigned to shore duty, his lawyers say.

The service wants to remove the officer from command of the East Coast warship over his stance on the vaccine but was blocked by a Florida federal judge. Navy officials have testified that the ship is “out of commission” and undeployable with the commander in charge.

The reassignment follows a March 25 Supreme Court ruling in a separate lawsuit against the Department of Defense involving members of the naval special warfare community that allows the military to place unvaccinated personnel in non-operational roles without interference from a federal judge. However, the Navy cannot dismiss any sailors who refuse vaccination and applied for a religious exemption.

“On Monday, April 11, instead of getting underway with his ship, Navy Commander was “temporarily reassigned” for 60 days under a new Navy policy that prohibits unvaccinated personnel from going underway on Navy ships,” according to Mast’s declaration.

On Tuesday, the Navy referred questions from USNI News on the commander’s status to the Department of Justice. A DoJ spokesperson declined to comment to USNI News.

The commanding officer was told by his commodore on April 8 that he would be temporarily reassigned to shore duty for 60 days, according to the declaration.

Although the commodore is not named, Capt. Frank Brandon, commodore of Destroyer Squadron 26, previously submitted two declarations in the case, indicating that he is the commodore to whom the commanding officer reports.

The reassignment is retaliatory, said Mat Staver, chairman of Liberty Counsel. Under the temporary protection order granted by federal Judge Steven Merryday, the Navy cannot take any adverse action against the commanding officer. Merryday also granted an order for the commander to testify anonymously.

Staver told USNI News that his legal ministry is planning to take additional legal action over the reassignment, but there is no set timeline.

It is not clear if vaccination status was the Navy’s only consideration when reassigning the commanding officer.

The Navy sought to remove the commanding officer from the East Coast-based destroyer after losing confidence in his ability to lead, Brandon wrote in his declarations, submitted in the case.

The loss of confidence came after the commanding officer failed to follow a lawful order after his religious waiver request was denied, according to Brandon’s declaration.

“A commanding officer who cannot adhere to military orders has forever lost the ability to instill a culture of good order and discipline in their crew,” according to the declaration. “This will inevitably lead to the breakdown of basic principles of training, safety and seamanship and could have tragic consequences at any moment but especially when the vessel is underway at sea.”

Brandon wrote in a second declaration he also lost trust in confidence in the commanding officer after he failed to get tested for COVID-19 immediately after showing symptoms and for not informing Brandon about leaving the area.

The commanding officer also asked for leave in early February 2022, which he told Brandon was for spending time with family, according to the commodore’s declaration, dated Feb. 9, 2022.

However, Brandon learned that the commanding officer left Virginia to testify in Tampa, Fla., for his lawsuit.

“Based on that fact, and the three opportunities Plaintiff Navy Commander had to notify me that he was traveling out of area, I believe that Plaintiff Navy Commander intentionally misled me,” Brandon wrote in the declaration. “This is cause alone for removal of Command. If I cannot trust the Commanding Officer of a guided-missile destroyer to honestly appraise me of his whereabouts, I cannot trust him with command of the ship or her crew.”

Brandon also wrote that due to where the commanding officer flew, he would need to go through a five-day restriction of movement period. The commanding officer did not fill out the proper risk assessment paperwork or discuss a plan with his executive officer for what would happen with that ship, which is in basic phase, during that time, according to Brandon’s declarations.

“In light of the foregoing, I do not trust Plaintiff Navy Commander with the lives of our Sailors,” Brandon wrote in his second declaration. “In my professional judgment, I cannot leave him in Command of a Navy warship, regardless of his vaccination status or religious exemption request.”

The commanding officer testified again in his case on March 10. He testified that he received a subpoena to appear in court and that he went through the appropriate steps to get leave, according to a hearing transcript.

In his declaration, Mast writes it is a new policy preventing unvaccinated sailors going underway. However, it is not a new policy, but one laid out in NAVADMIN 256/21, which was published in November 2021.

“Navy service members who are not vaccinated, regardless of exemption status, may be temporarily reassigned with concurrence of the first flag officer in the administrative chain of command based on operational readiness and mission requirements,” according to the NAVADMIN.

The Navy previously said those with exemptions for the vaccine could have their positions limited due to being unprotected against COVID-19, USNI News previously reported.