NATIONAL HARBOR, Md. – Predictability is the best possible scenario for shipbuilders, the president of Ingalls Shipbuilding said Monday, in part because naval shipbuilding is a low-margin business and heavily reliant on Congress.

Kari Wilkinson, who also serves as executive vice president of Huntington Ingalls Industries, told attendees at Sea Air Space 2022 symposium one lesson the pandemic for shipbuilders is the need for greater investment in workforce composition.

She added that shipyard workers at Pascagoula have been “all in” through the pandemic. “They come to work every day” and operate “in close environments.”

Speaking with reporters, she said, “we’ve seen some attrition” in the workforce, but Ingalls in Mississippi has “sought out new, different skill sets” in potential workers and provided on-the-job training. It also is working with 20 area high schools on the Gulf Coast to show students career opportunities at Ingalls, as well as training new workers through its apprentice schools.

Wilkinson said shipbuilding requires different skills than many industries. She called them “ruggedized” and said the industry must not only develop new workers, but retain them. 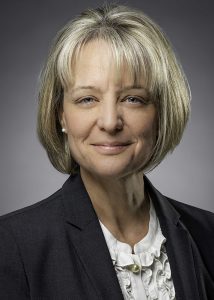 She added the Pascagoula shipyard “is absolutely modern,” having undergone a complete overhaul for the first time since its founding 84 years ago. She said it was more comprehensive than the reconstruction necessitated by Hurricane Katrina in 2005. This allows Ingalls to look more closely at developing its workforce as it prepares to build new flights of guided missile destroyers and amphibious ships for the Navy, the National Security Cutter for the Coast Guard and future vessels for both services.

On operating under a months-long continuing resolution rather than an approved budget, she said, “we’re really excited to be moving forward.”

But the purchase of future LPDs and the start of the Navy’s frigate program are up in the air following the release of the administration’s budget last week.

In her luncheon address, Wilkinson described the supplier base as “the absolute backbone to national security.” But the impact of COVID-19 and supply chain bottlenecks have left them as a “fragile network of partners.”

One way to improve predictability is “involving everybody earlier” on what is expected by the Navy and the shipyard going into a program, she said, calling for a “clear communication of expectations.”

Wilkinson, in talking with reporters, said communication can improve efficiency. For example, she said, “We like to keep the same people working on the same kind of ship.” That includes the National Security Cutter program, she added.

Ingalls delivered the 10th cutter this weekend and is working on the 11th.