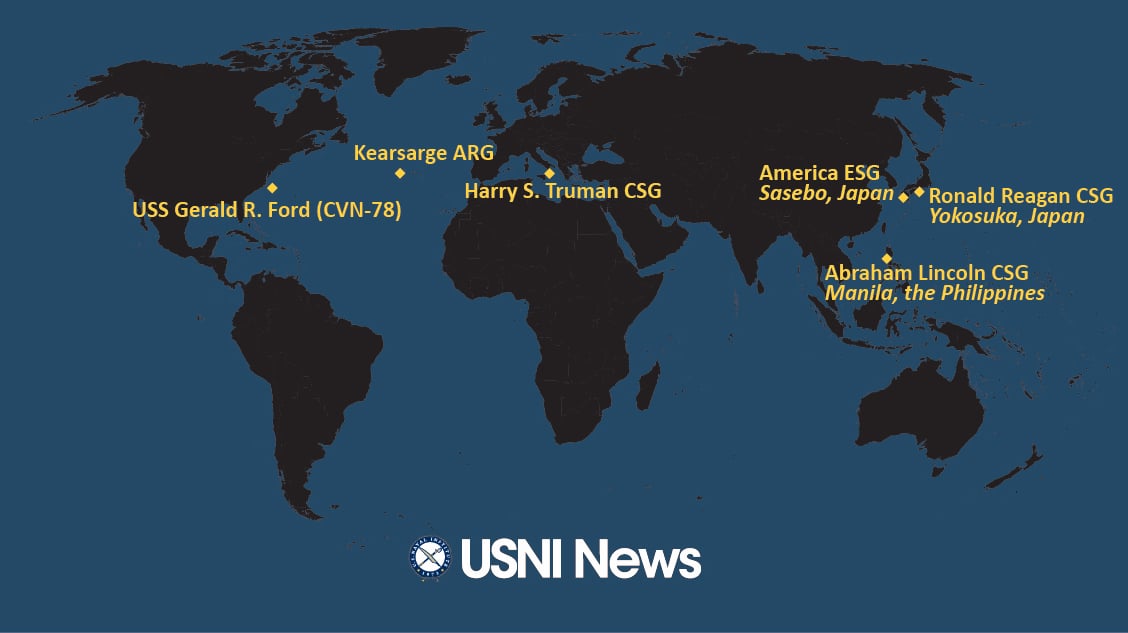 These are the approximate positions of the U.S. Navy’s deployed carrier strike groups and amphibious ready groups throughout the world as of March 28, 2022, based on Navy and public data. In cases where a CSG or ARG is conducting disaggregated operations, the chart reflects the location of the capital ship. 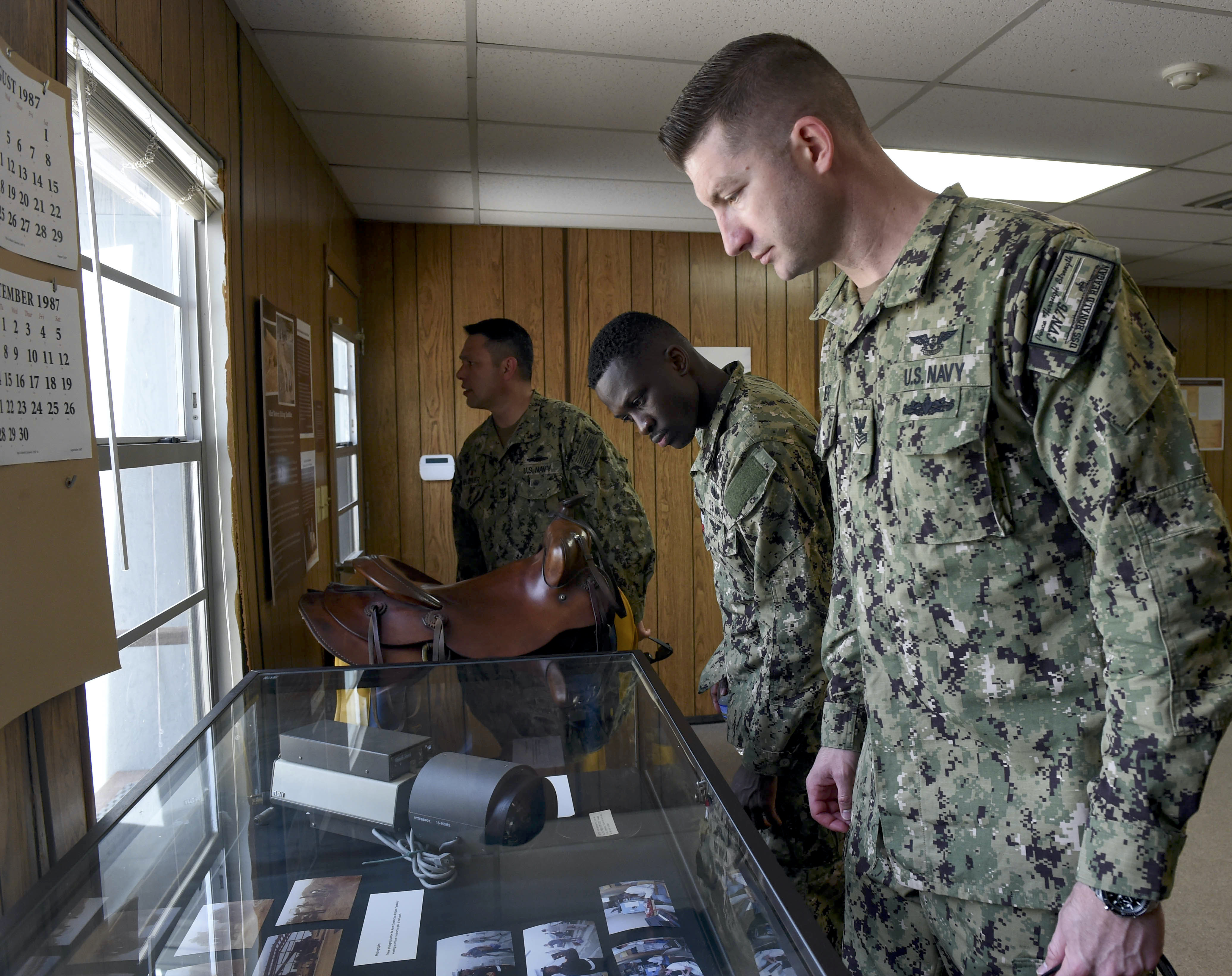 USS Ronald Reagan (CVN-76) is in port in Yokosuka, Japan, conducting its annual winter maintenance availability. The carrier began a four-month selected restricted availability in Yokosuka on Jan. 13, following a five-month deployment in the Middle East and the Pacific.

“Employees from Puget Sound Naval Shipyard & Intermediate Maintenance Facility and Norfolk Naval Shipyard, along with the ship’s force and contractors, are working together in Japan to complete maintenance on the aircraft carrier,” according to a Navy statement. 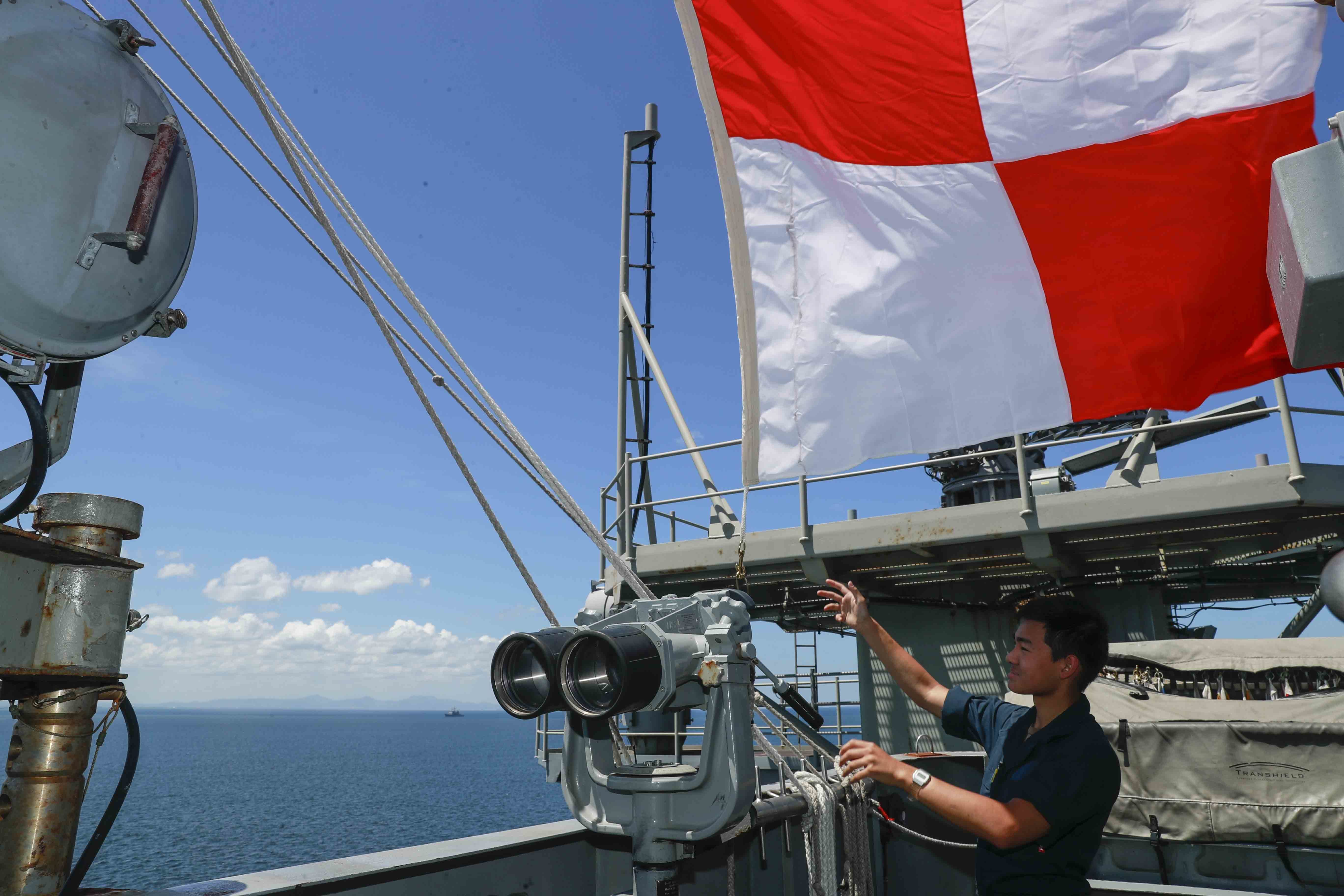 USS Abraham Lincoln (CVN-72) is expected to depart the Philippines on Monday after a port visit, USNI News has learned.

The Abraham Lincoln Carrier Strike Group (CSG) is in Manila, Republic of the Philippines. This is the first U.S. aircraft carrier to call in the Philippines in more than two years. USS Ronald Reagan (CVN-76) and its escorts made a port visit Manila on Aug. 7, 2019.

Abraham Lincoln pulled into Manila Bay for a port visit on Friday after Wednesday’s operations in the South China Sea. Before that, the carrier was operating in the Philippine Sea. A number of U.S surface ships are also operating in the region on independent patrols.

Navy released photos showed destroyers USS Dewey (DDG-105) and USS Milius (DDG-69) conducting live firing exercises on Thursday in the Philippine Sea, with Standard Missile 2 (SM-2) Block 3As. Earlier Dewey, Milius, USS Barry (DDG-52) and USS Higgins (DDG-76) were shown by 7th Fleet social media to be operating together on March 15 in the Pacific Ocean. All four destroyers are part of DESRON 15, which is based in Japan.

The U.S, Australia and Japan conducted a trilateral exercise in the South China Sea, which concluded on March 15. The exercise participants were destroyers USS Momsen (DDG-92) and JS Yudachi (DD-103), frigate HMAS Arunta (FFH-151) and a P-8A Maritime Patrol Aircraft from VP-26.

U.S. Marines with 3d Marine Littoral Regiment, 3d Marine Division are taking part in Balikatan 22 – a joint exercise between the U.S. and Philippine – taking place from March 28 to April 8. 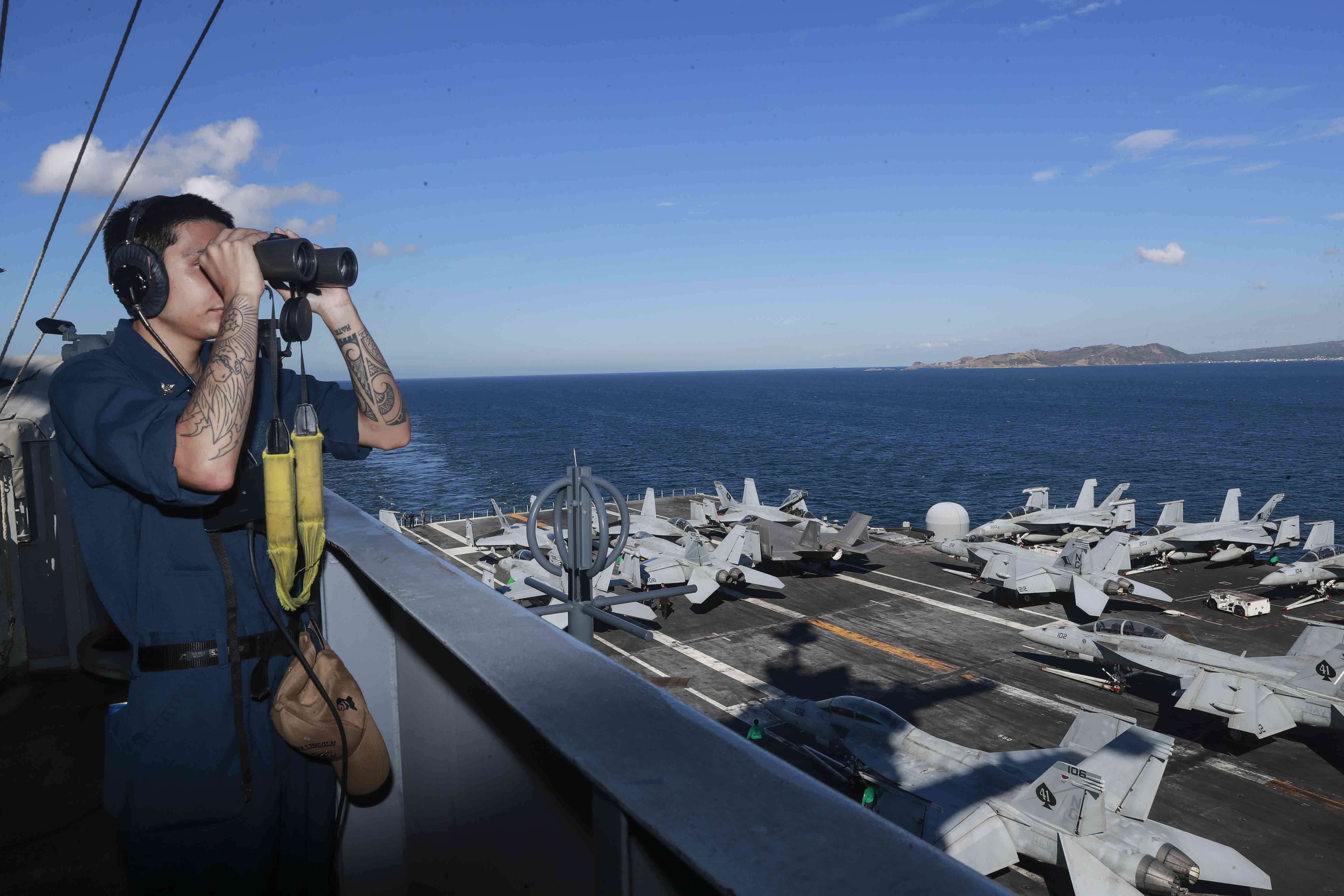 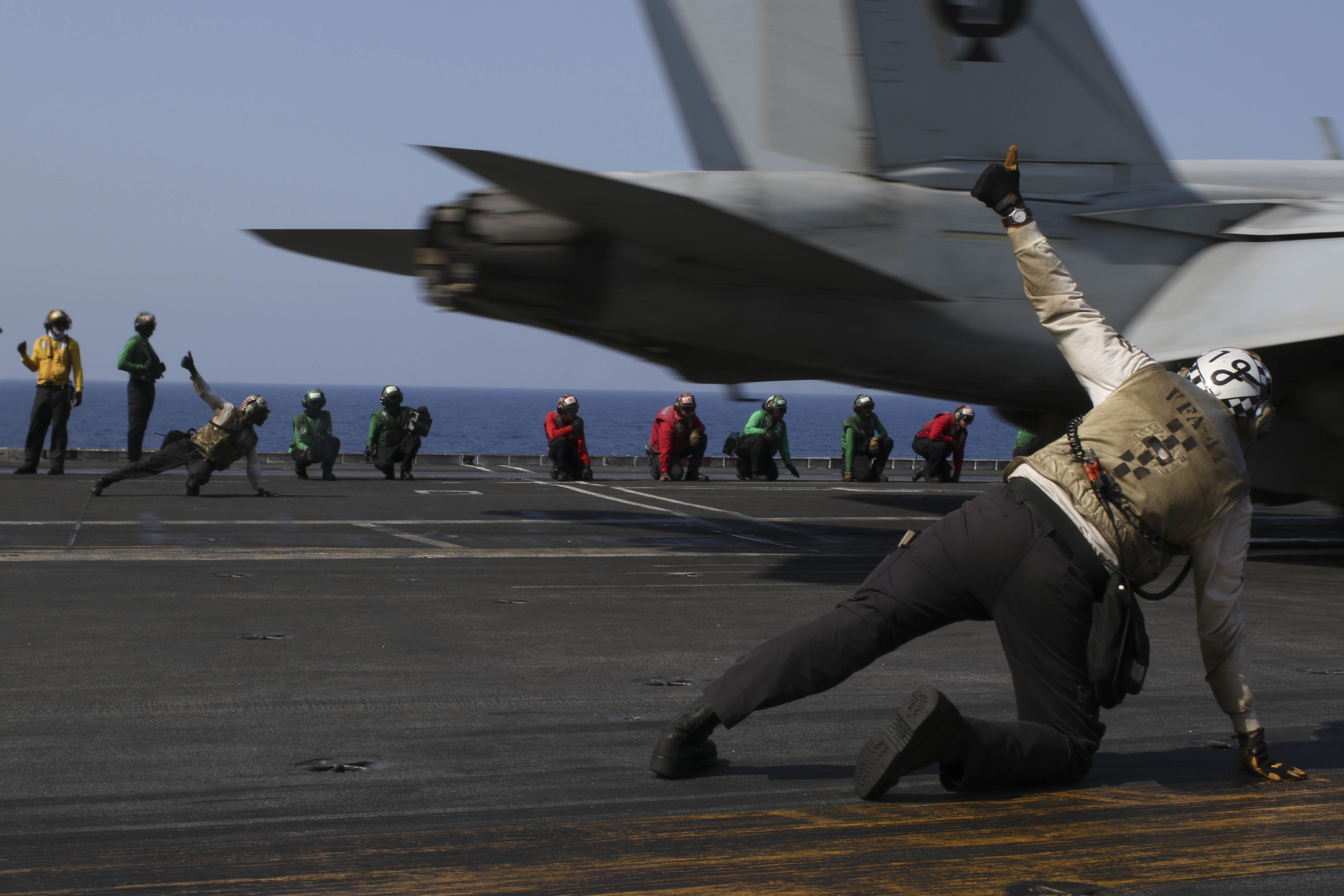 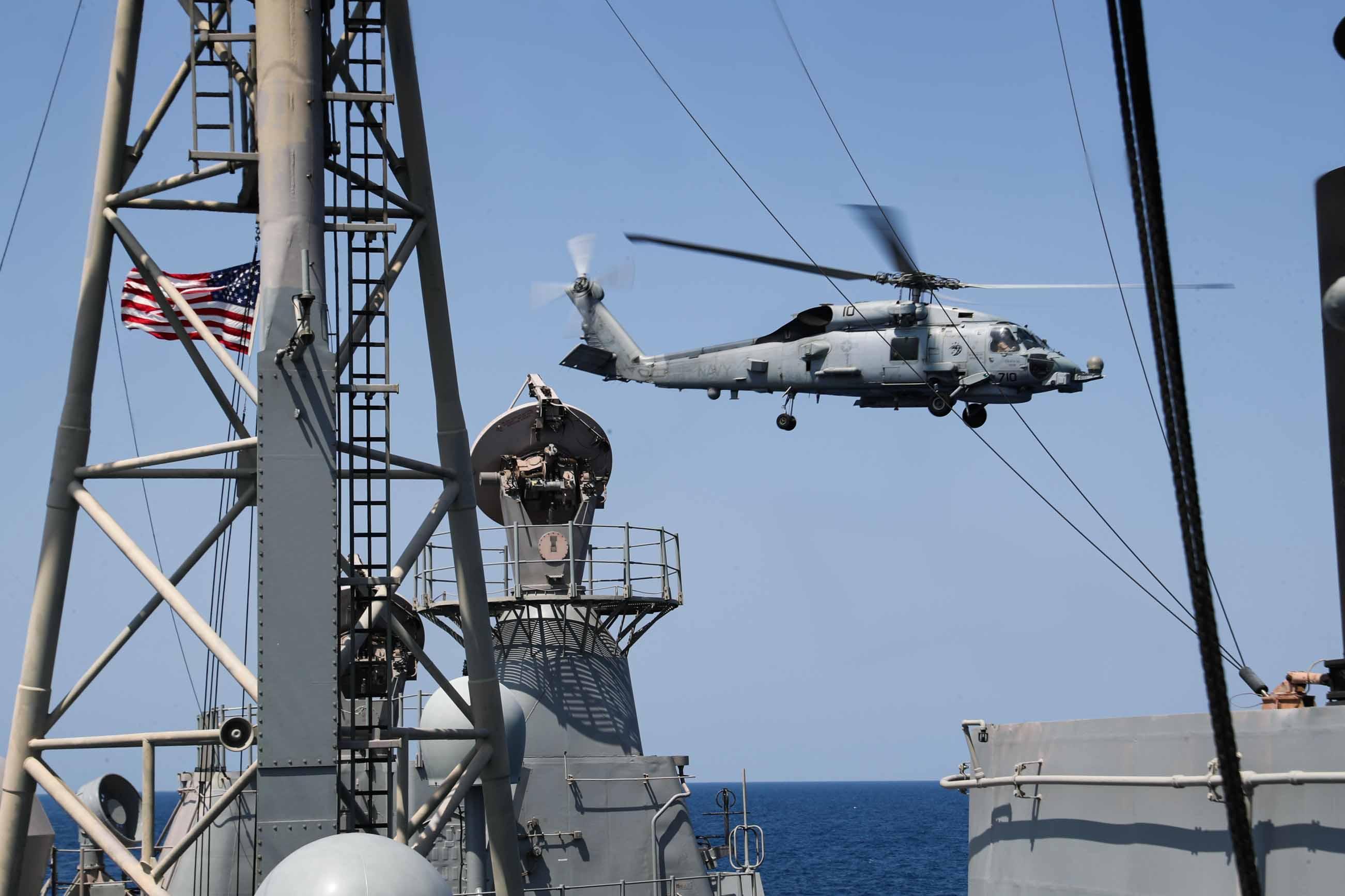 An MH-60R Sea Hawk helicopter assigned to the ‘Raptors’ of Helicopter Maritime Strike Squadron (HSM) 71, takes off from the flight deck of the Ticonderoga-class guided-missile cruiser USS Mobile Bay (CG-53) on March 20, 2022. US Navy Photo 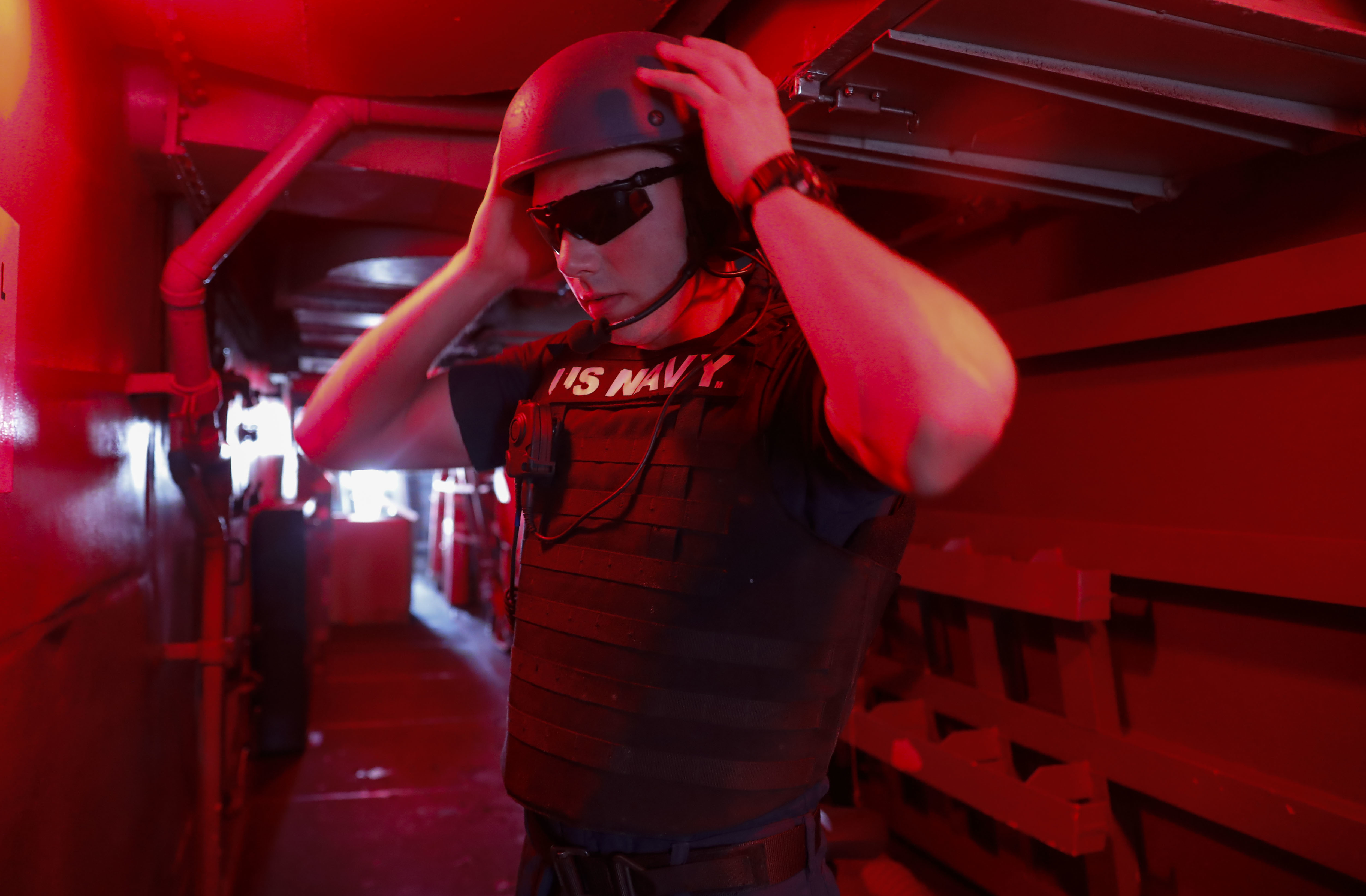 Operations Specialist 3rd Class Tristan Chotkowski adjusts personal protective equipment prior to standing watch aboard the guided-missile destroyer USS Fitzgerald (DDG-62) during a transit of the Strait of Hormuz, March 23, 2022. US Navy Photo 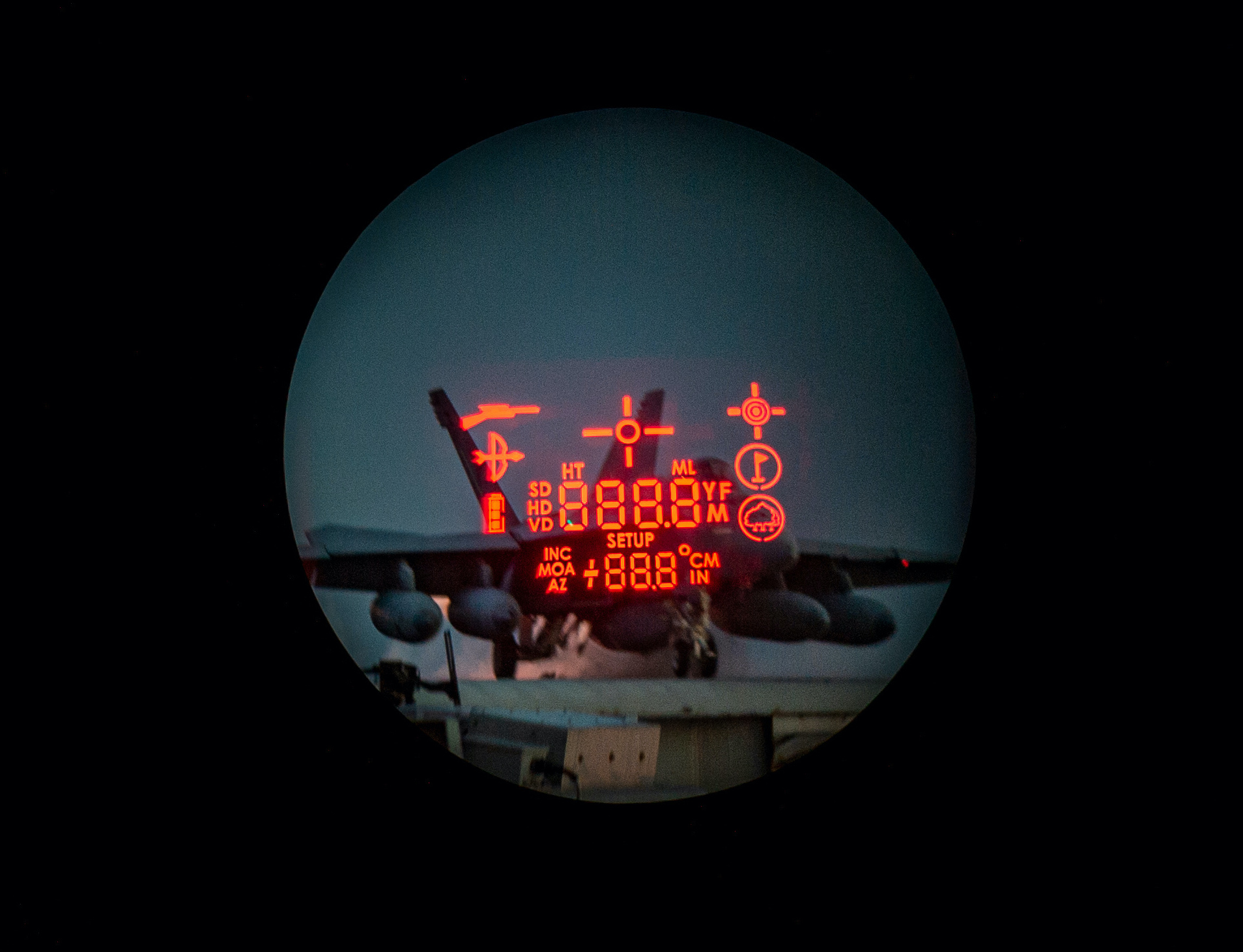 Since December, the Harry S. Truman Carrier Strike Group, Carrier Air Wing 1 and its escorts have been operating predominantly in the Adriatic and Ionian Seas, launching 80 to 90 sorties a day as far north as Lithuania for a variety of missions with NATO-allied aircraft from Romania, France and Italy, reported USNI News last week. Some fighters launched from Truman are training, while some are set to patrol NATO’s airspace and prevent Russian aircraft from violating those borders. 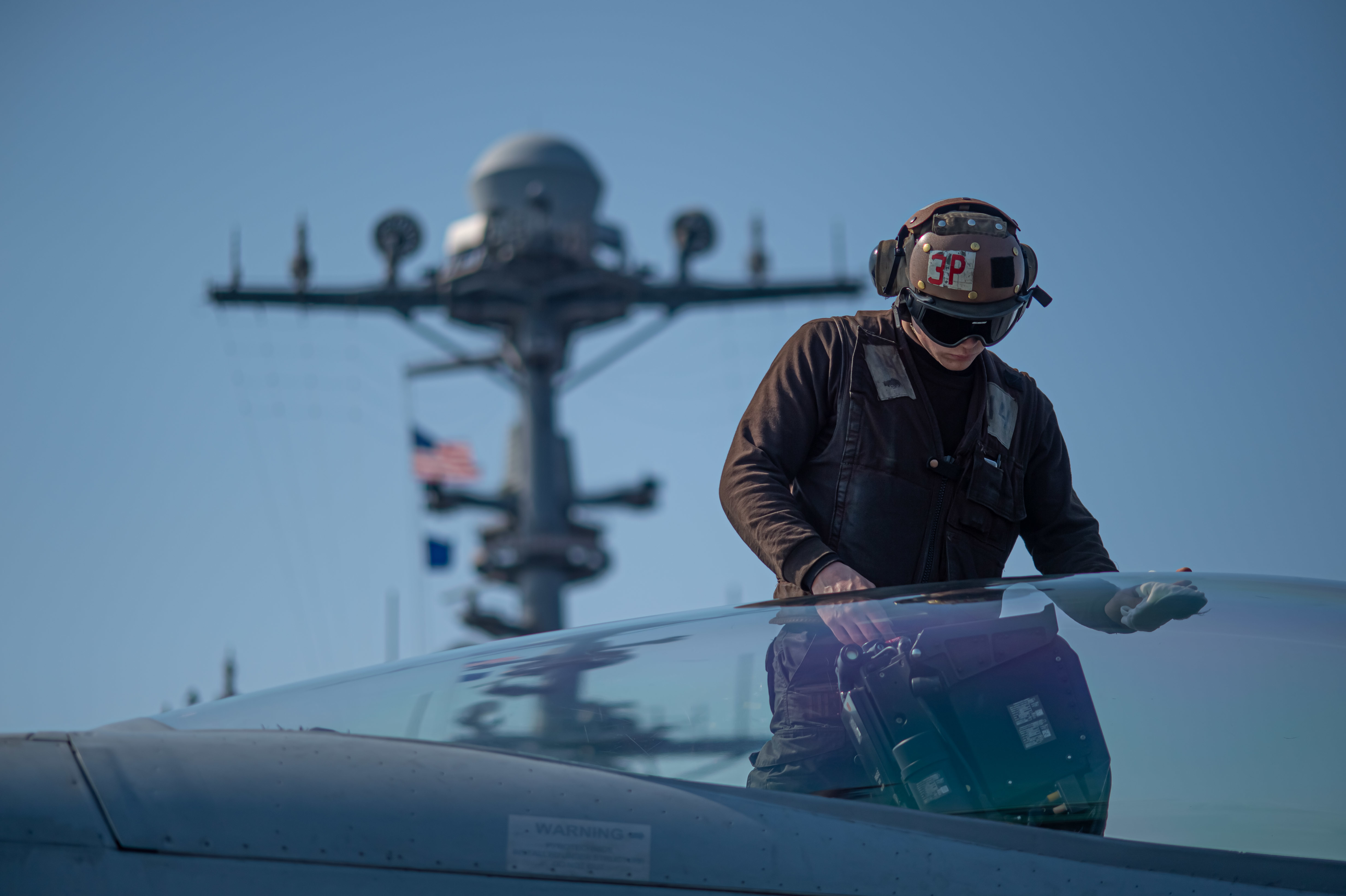 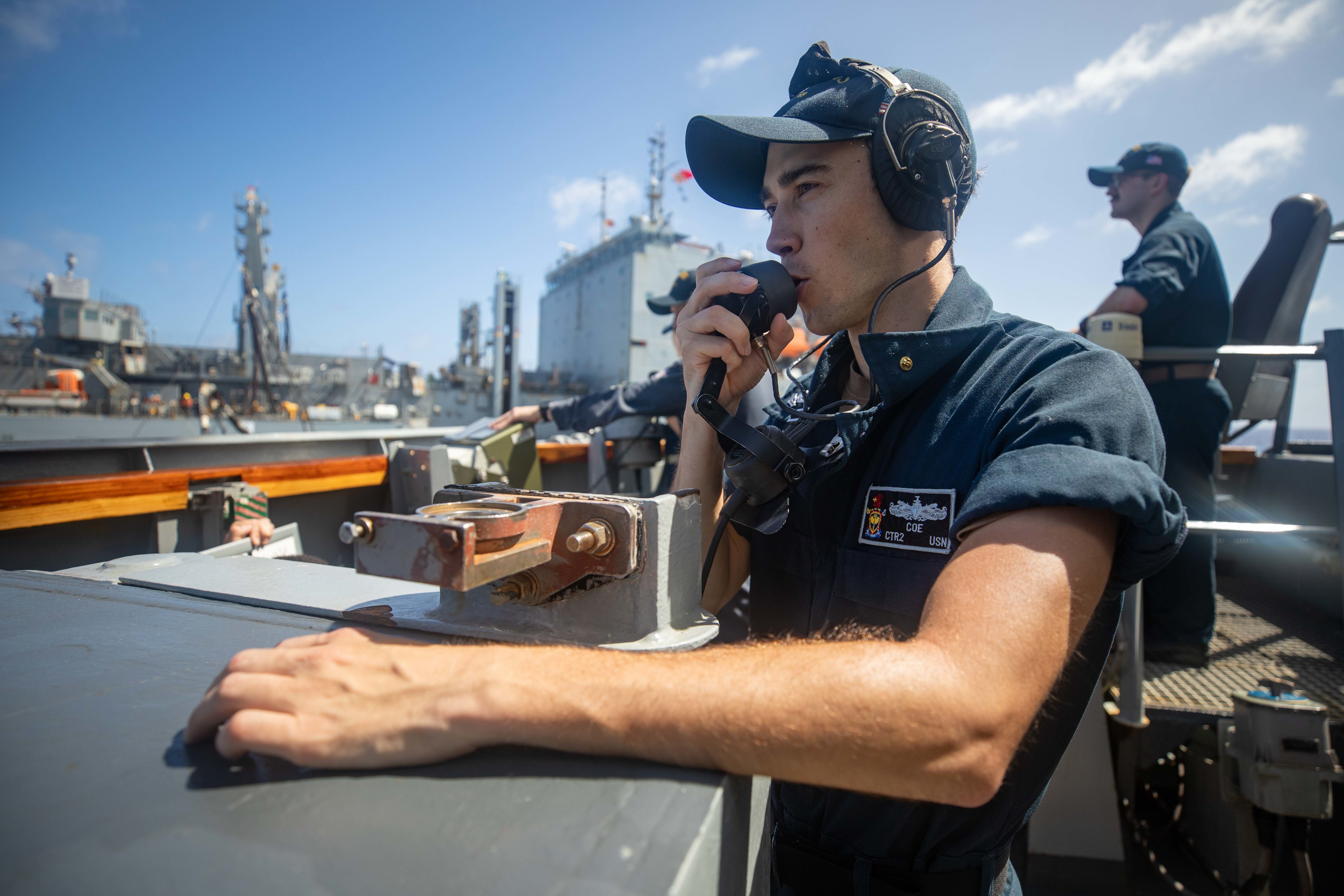 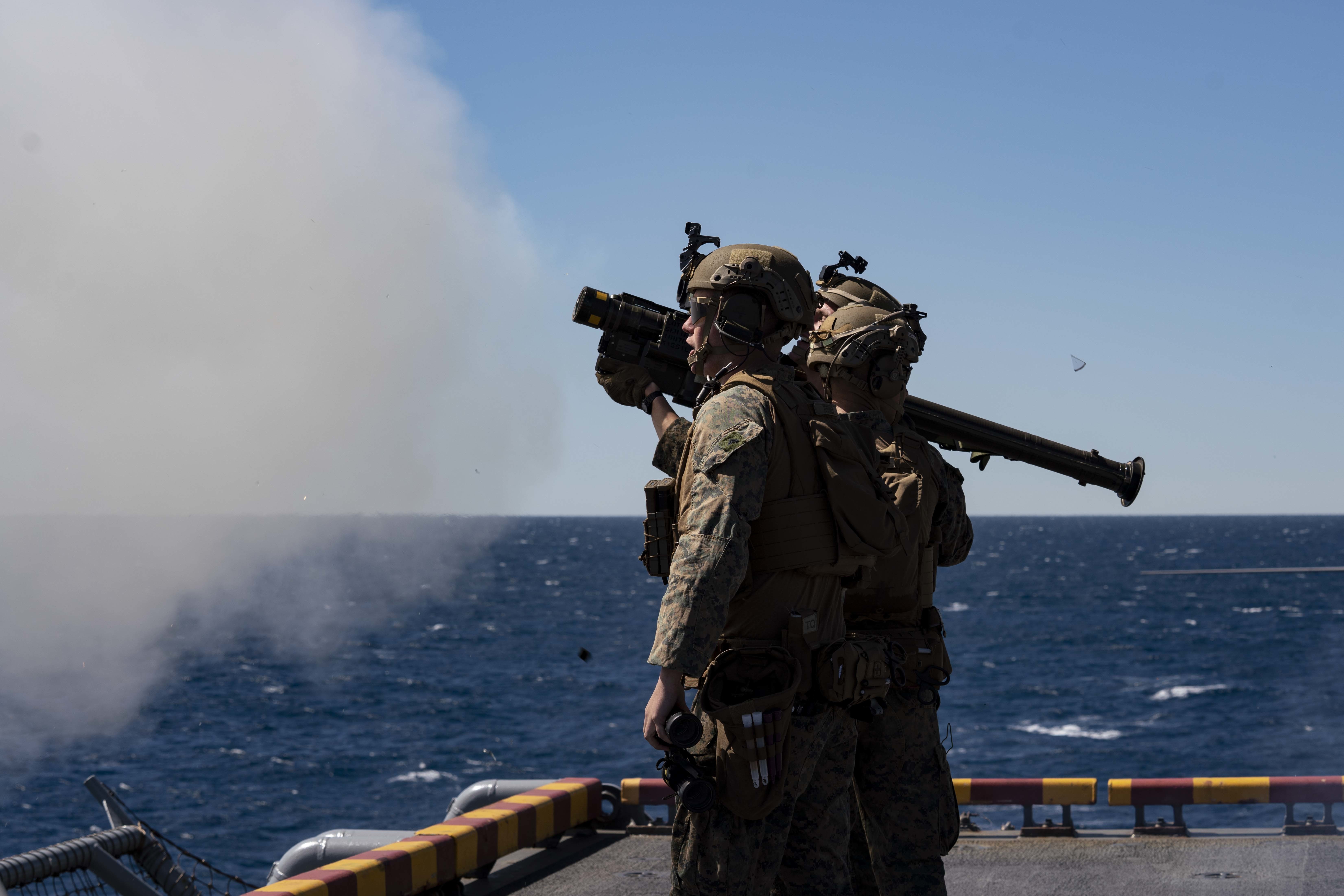 The Kearsarge Amphibious Ready Group (ARG) has crossed the “chop” line into 6th Fleet and is in the Middle of the Atlantic. Two of the three-ship Kearsarge Amphibious Ready Group deployed on March 16 from Naval Station Norfolk, Va., and Camp Lejeune, N.C., according to U.S. 2nd Fleet. USS Kearsarge (LHD-3) and USS Arlington (LPD-24) left the East Coast with Marine Expeditionary Unit 22 embarked. The third amphib, USS Gunston Hall (LSD-44), is set to deploy later this month from Joint Base Little Creek-Fort Story, Va.

It’s unclear if Kearsarge will be part of the ongoing NATO presence operations as the Russian invasion of Ukraine continues. Since the late February invasion, the U.S. and NATO have massed naval power in the Baltic and Mediterranean seas. 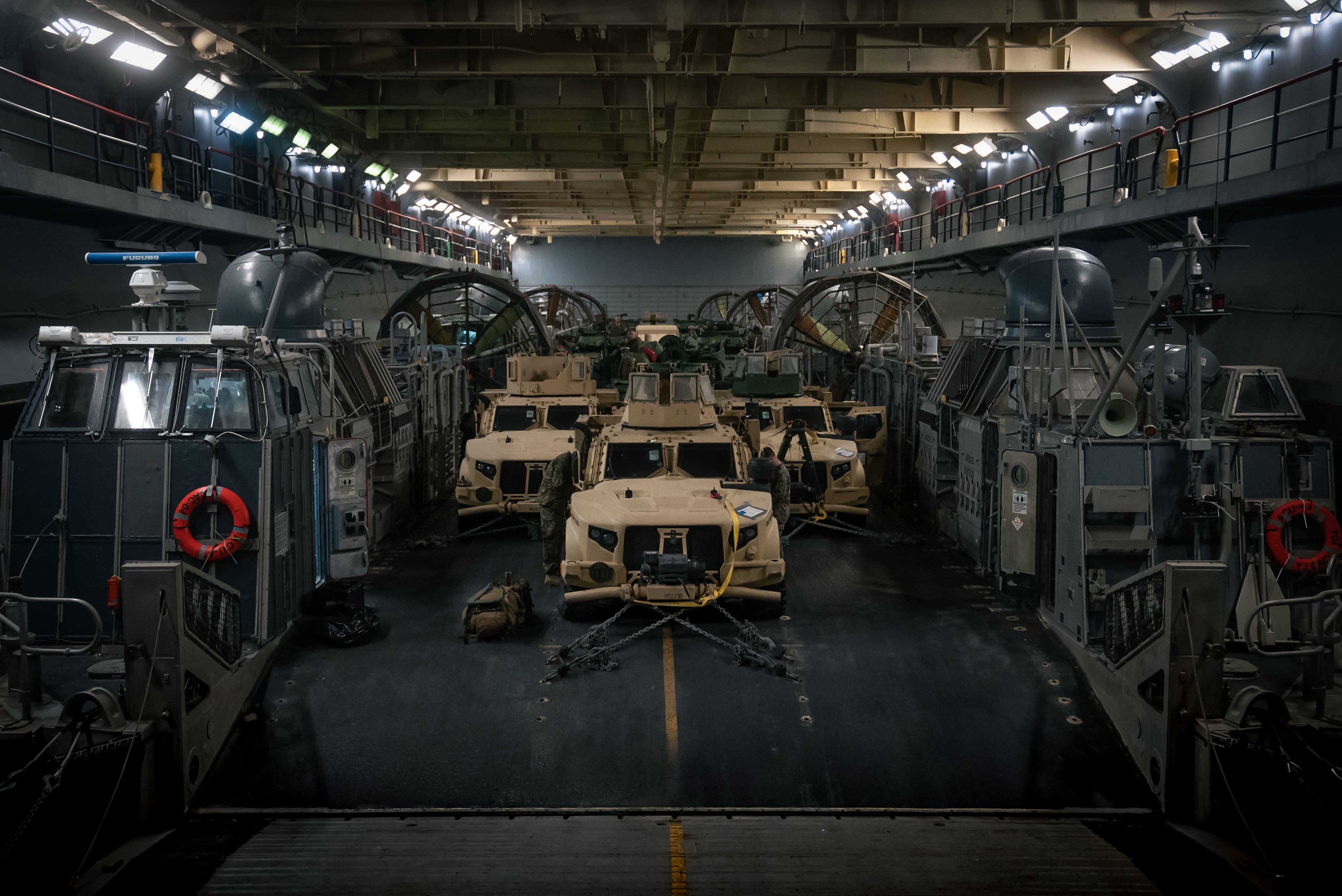 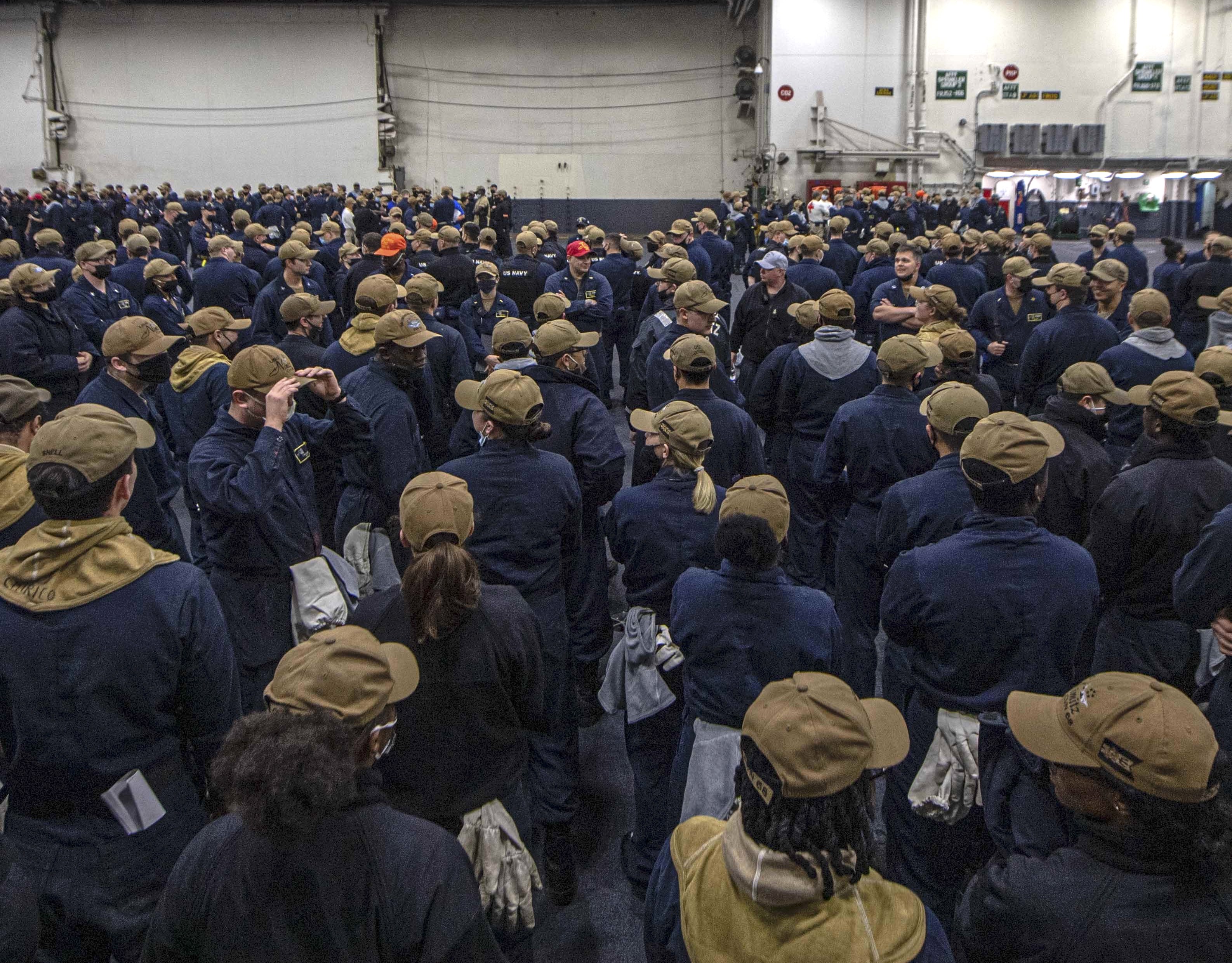 Sailors respond to a simulated abandon ship during a general quarters drill on the aircraft carrier USS Nimitz (CVN-68) on March 23, 2022. US Navy Photo

USS Nimitz (CVN-68) has completed its basic phase of training in and around San Diego and returned to homeport in Bremerton, Wash., reported The Kitsap Sun.