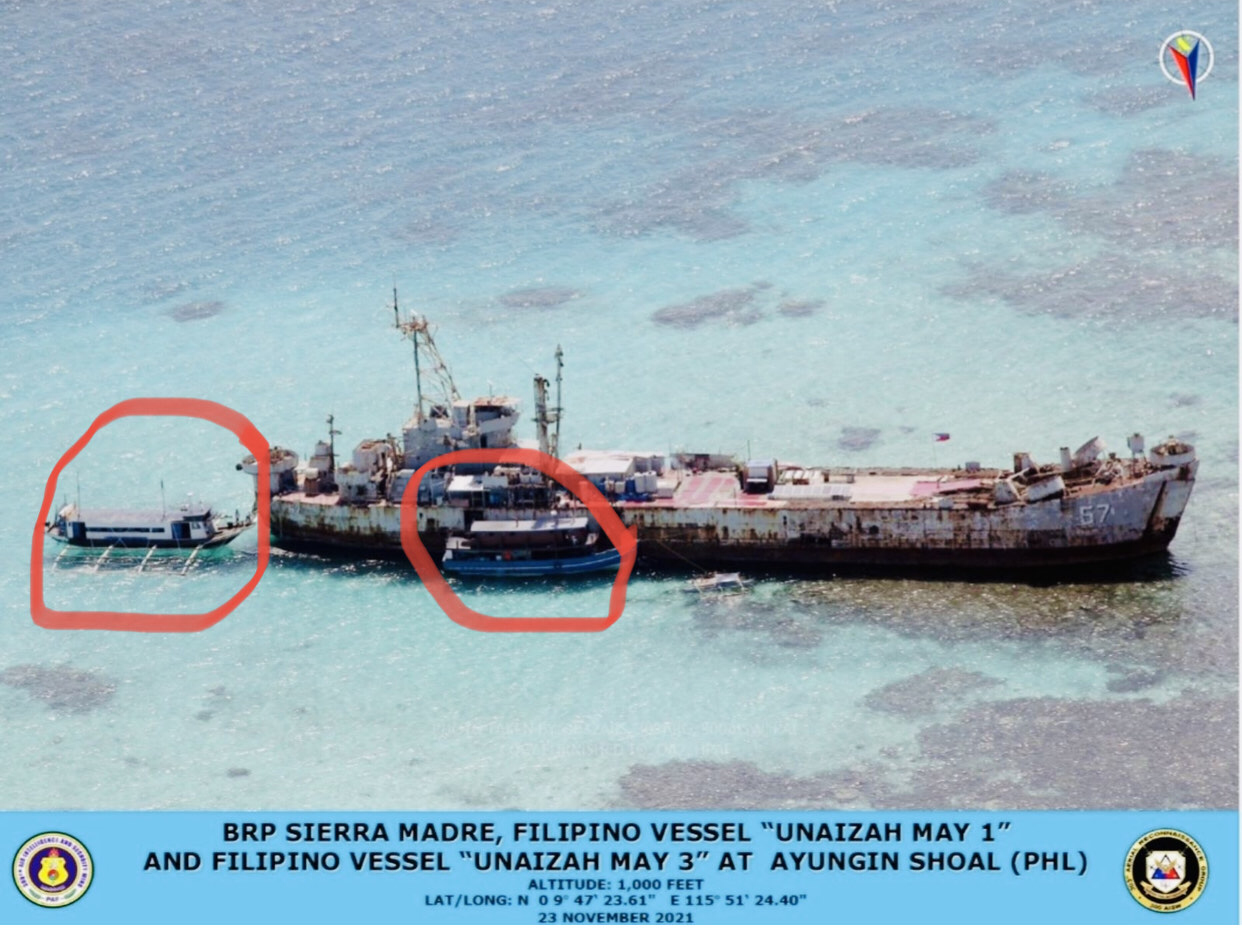 MANILA, Philippines — The Philippine military undertook a resupply mission for its troops in the Second Thomas Shoal in the Kalayaan Island Group (KIG) on Tuesday, exactly one week after the mission was aborted after two Chinese Coast Guard vessels used water cannons to attack the two civilian boats bringing supplies to the soldiers.

The delivery of supplies for the small contingent of soldiers aboard the partly sunken BRP Sierra Madre, which Filipino troops are using as an outpost in securing the Second Thomas Shoal, apparently went along with a scheduled troops’ rotation.

“The two civilian resupply boats manned by the Philippine Navy arrived at the Sierra Madre in the Ayungin shoal at 11 a.m. today without any untoward incident,” Defense Secretary Delfin Lorenzana said hours after the two boats docked beside Sierra Madre. “They are presently unloading personnel and cargo.“

“After a couple of days they will return to Oyster Bay,” the defense chief added, referring to the Philippine Navy’s base in Palawan.

The resupply mission was undertaken after Lorenzana on Sunday said he had ordered the Armed Forces of the Philippines’ Western Command to carry out the previously aborted mission, wherein China’s ambassador in Manila had assured that Beijing would not interfere in the activity.

Still, China did not allow the delivery of supplies and personnel to go smoothly, as a Chinese Coast Guard vessel was seen in the area, and it even sent a rubber boat manned by three men who drew close to Sierra Madre.

“There was a Chinese coast guard ship in the vicinity, which sent a rubber boat with three persons near the Sierra Madre while our boats were unloading and took photos and videos,” Lorenzana said.

“I have communicated to the Chinese ambassador that we consider these acts as a form of intimidation and harassment,” he added.

Last week, two Chinese Coast Guard Vessels attacked for at least an hour the two boats chartered by the military to deliver provisions for the soldiers aboard Sierra Madre, drawing condemnations from the United States, Japan, Australia, Germany and France.

The attack broke the outrigger of one of the two boats and forced the vessels to abort the resupply mission, although they were already inside the shoal.

The U.S. State Department reminded China of the 1951 Philippines-U.S. Mutual Defense Treaty, which it said covered public vessels in the South China Sea.