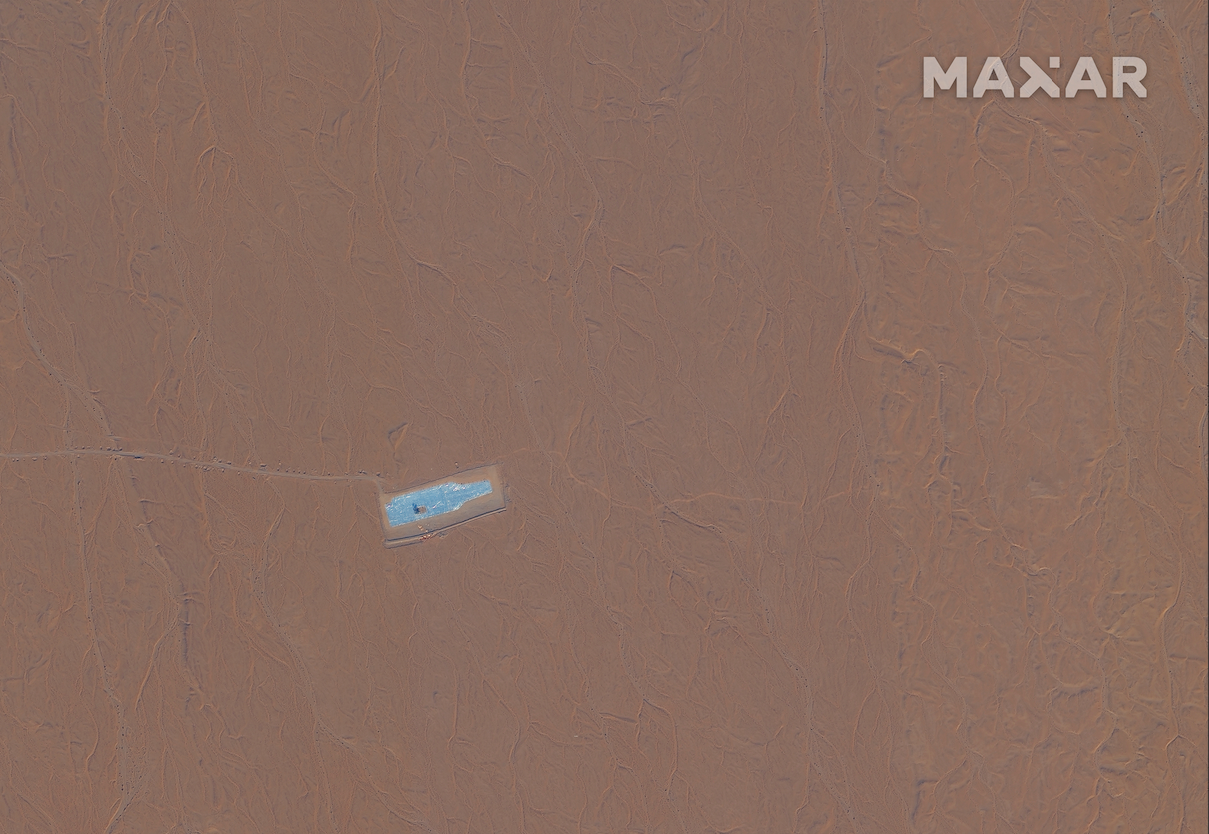 A second suspected missile target in the shape of a U.S. aircraft carrier has been spotted in a rural Chinese desert, according to satellite photos obtained by USNI News.

The site consists of a single aircraft carrier target, miles from the nearest town in the Xinjiang region, according to photos provided to USNI News by satellite imagery company Maxar. The carrier target is about 300 miles away from a larger suspected missile range in the Taklamakan Desert, first reported by USNI News on Sunday. The two sites share similar characteristics and are aligned on a map with the carriers facing the same direction – as if in a convoy. Like the first, this new target shares the same dimensions as a U.S. Navy aircraft carrier.

Work on the new target started on or before June 25, based on a historical review of satellite imagery. The main task of building it was carried out in October and the target now appears newly finished. 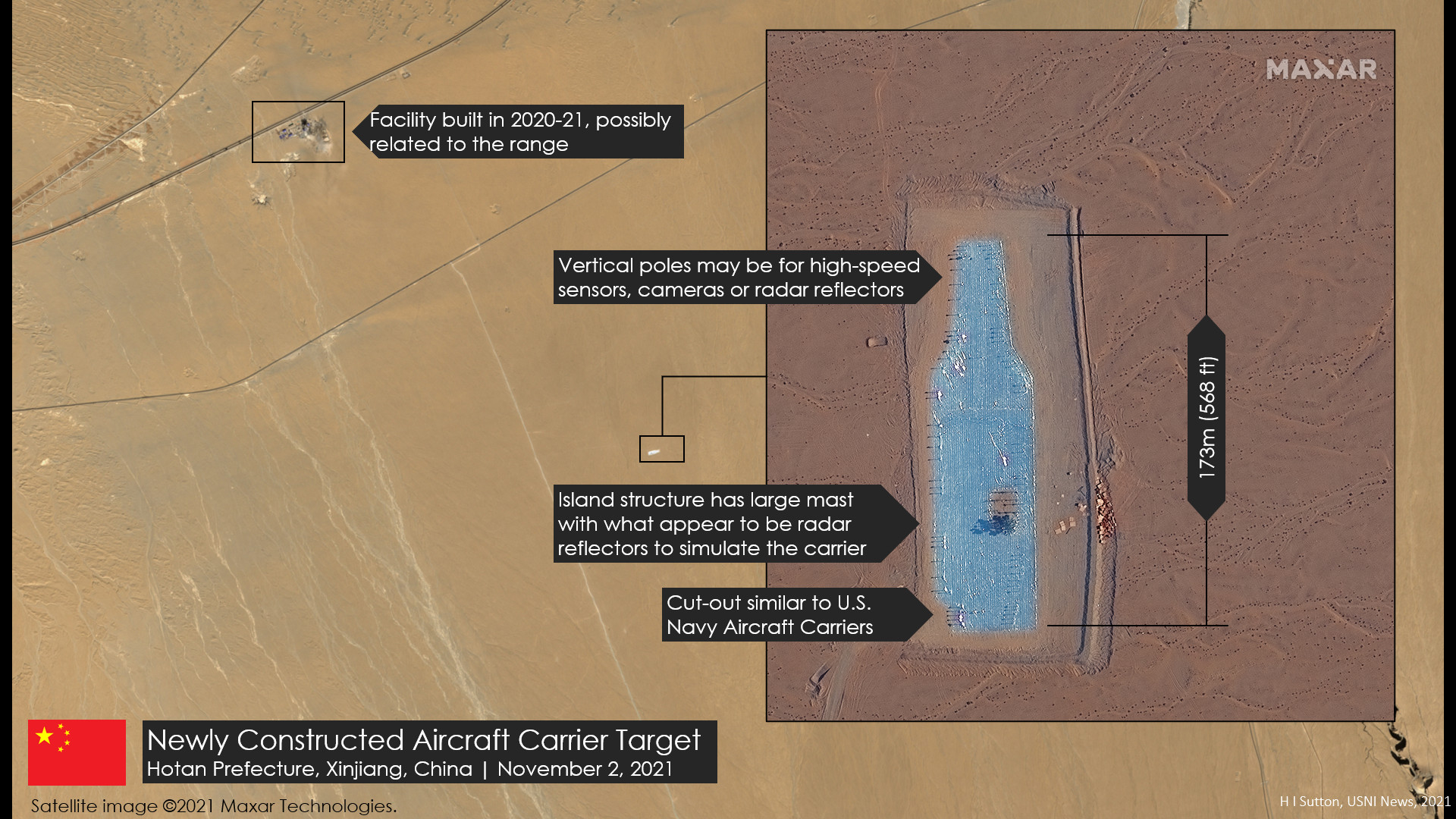 Unlike the first, however, this target is not full-scale. It is about half the size of a U.S. Nimitz-class carrier at 173 meters, or 568 feet, in length. The site appears to be anchored in the ground, more like the destroyer targets at the first site. It is outlined by upright poles with what appear to be small radar reflectors or instrumentation. Unlike the other carrier target, it has a clear island, which appears to have much larger radar reflectors.

Blue Forces Are The Enemy In Chinese Wargames

China’s rapid naval expansion has made the People’s Liberation Army Navy the largest maritime force in the world, which has become a major concern for the U.S., according to the latest Pentagon report on Chinese military power. A major aspect of the People’s Liberation Army’s expansion is the rapid adoption of cutting-edge weaponry – including hypersonic missiles, particularly ‘carrier killer’ anti-ship ballistic missiles, according to the report.

Testing the new anti-ship weapons has become a priority for the Chinese. Earlier this year in a military equipment show, the China Aerospace Science and Industry Corporation (CASIC) displayed a scale model of the rail-mounted target seen at the first site in the Taklamakan Desert. An almost identical version was displayed in model form at this year’s Zhuhai Airshow held from Sept. 28 through Oct. 3. It was labeled: “Land-based Integrated Electronic Blue Army System.” This points to the radar signature aspect of the targets as well as their visual effect, according to imagery reviewed by USNI News.

It’s clear that the models displayed are meant to represent the enemy forces in Chinese exercises. In the Chinese military, the opposing forces are labeled “blue,” while their own are red forces – the opposite of the U.S. and NATO. 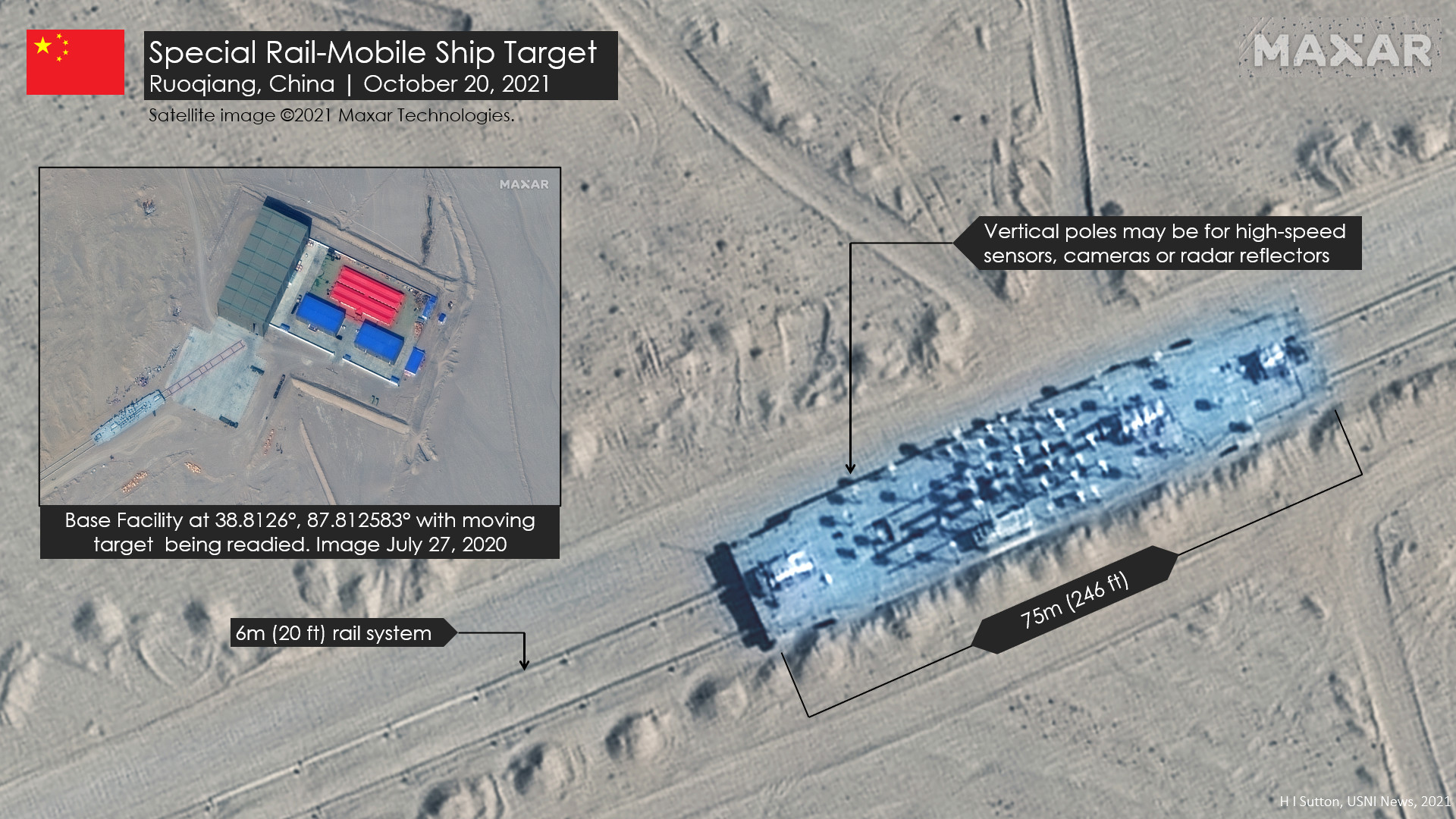 Placing the targets in the interior allows the entire missile flight to take place over their own territory and gives China greater control of the airspace around the site. Keeping the tests away from the sea ensures that any debris cannot be recovered by other navies in the way it could from the ocean floor. Both factors will make it difficult to gather intelligence on the weapons tests.

It is unclear whether the target is fully finished yet, or whether more will be added to make it more like the first site with multiple targets in different formats. There does not appear to be the same level of range instrumentation as the first site, according to the photos, suggesting that it is not yet fully operational.

While the detailed analysis of these sites may take some time, the scale of these ranges and the degree of effort put into them, confirm the Pentagon’s claim there’s an expansion of China’s ASBM program.