China has the biggest maritime force on the globe with an inventory of about 355 vessels, according to a Defense Department report released Wednesday.

With 355 ships in its fleet, the People’s Liberation Army Navy (PLAN) is slated to expand its inventory to 420 ships within the next four years, the Pentagon’s annual China military report estimates. By 2030, the PLAN is expected to have 460 ships.

The 355 estimation accounts for “major surface combatants, submarines, aircraft carriers, ocean-going amphibious ships, mine warfare ships, and fleet auxiliaries,” according to the report, which covers events in 2020.

“This figure does not include 85 patrol combatants and craft that carry anti-ship cruise missiles (ASCMs). … Much of this growth will be in major surface combatants,” the report reads.

The report, which is mandated by Congress each year, describes China’s navy as having growing ambitions to operate with more versatile platforms beyond the Indo-Pacific region.

This week’s release of the Pentagon report comes amid heightened tensions between China and Taiwan. Last month, China flew dozens of its aircraft in international airspace near Taiwan.

A senior defense official this week said those flights could be part of an effort to intimidate Taiwan, which Beijing sees as part of China and aims to reunify with the mainland.

“I think it presumably serves multiple purposes for them. Sometimes I think what they are aiming at is to try to intimidate Taiwan militarily. Sometimes I think they may be trying to send a message to the United States or to other allies and partners, potentially. I think they are also certainly trying to improve their training under realistic conditions – that’s something that they write about a lot in their literature,” the official told reporters Tuesday.

“There’s frequently an external messaging component to it, maybe a training aspect as well, and potentially some messaging for a domestic audience to sort of display their growing capabilities,” the official added. “I think I wouldn’t dismiss that there’s sort of, to some extent, a message that they’re trying to highlight for a domestic audience that’s part of this, in addition to the other factors.”

According to the military report, China is pursuing both new anti-submarine warfare capabilities and long-range strike capabilities, including land-attack cruise missiles that could be launched from surface ships and submarines.

“In the near-term, the PLAN will have the capability to conduct long-range precision strikes against land targets from its submarine and surface combatants using land-attack cruise missiles, notably enhancing the PRC’s global power projection capabilities,” the report reads. “The PRC is enhancing its anti-submarine warfare (ASW) capabilities and competencies to protect the PLAN’s aircraft carriers and ballistic missile submarines.”

“In the coming years, the PLAN will probably field LACMs on its newer cruisers and destroyers and developmental Type 093B nuclear attack submarines. The PLAN could also retrofit its older surface combatants and submarines with land-attack capabilities as well,” the report reads. “The addition of land-attack capabilities to the PLAN’s surface combatants and submarines would provide the PLA with flexible long-range strike options. This would allow the PRC to hold land targets at risk beyond the Indo-Pacific region from the maritime domain.” 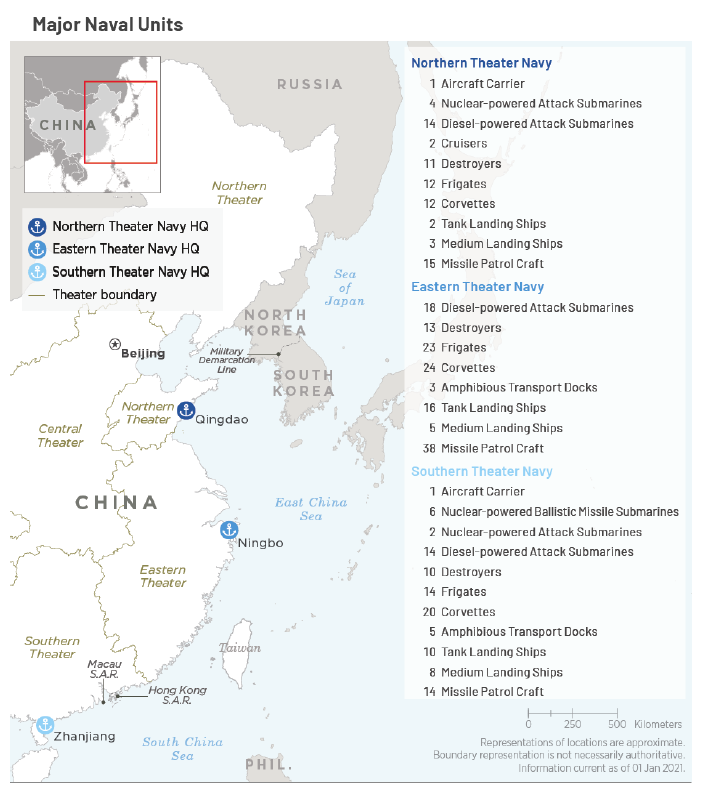 On the submarine front, the report estimates that China will keep building and purchasing conventional submarines, while it also builds new ballistic missile boats and nuclear-powered boats.

“Equipped with the CSS-N-14 (JL-2) submarine-launched ballistic missile (SLBM), the PLAN’s six operational Jin-class SSBNs represent the [People’s Republican of China]’s first credible sea-based nuclear deterrent. Each Jin-class SSBN can carry up to 12 JL-2 SLBMs. In 2019, Beijing displayed these missiles at the PRC’s 70th anniversary parade, revealing that at least a full complement of 12 JL-2s are complete and operational,” the report reads. “The PRC’s next-generation Type 096 SSBN, which likely began construction in the early 2020s, will reportedly carry a new type of SLBM. The PLAN is expected to operate the Type 094 and Type 096 SSBNs concurrently and could have up to eight SSBNs by 2030. This would align with Chairman Xi Jinping’s 2018 directive for the SSBN force to achieve ‘stronger growth.’”

The Pentagon report estimates that China will maintain an inventory of 65 to 70 boats in the next decade and swap its aging submarines for newer ones “on a near one-to-one-basis.”

“The PRC continues to increase its inventory of conventional submarines capable of firing advanced anti-ship cruise missiles (ASCMs). Between the mid-1990s and mid-2000s, the PLAN purchased 12 Russian-built Kilo-class SSK units, eight of which are capable of launching ASCMs. China’s shipyards have delivered 13 Song class SS (Type 039) and 17 Yuan class diesel-electric (SSPs) (Type 039A/B). The PRC is expected to produce a total of 25 or more Yuan class submarines by 2025,” according to the report.

The report notes that China’s submarine inventory is increasing “modestly as it works to mature its force, integrate new technologies, and expand its shipyards.”

As for its nuclear arsenal, the Defense Department says China probably wants to have 1,000 nuclear warheads by the end of this decade, a projection that surpasses the Pentagon’s last estimation of China’s nuclear development pace.

“Last year, DoD estimated that the PRC had a nuclear warhead stockpile in the low-200s and projected it to at least double over the next decade,” the report reads. “Since then, Beijing has accelerated its nuclear expansion, which may enable the PRC to have up to 700 deliverable nuclear warheads by 2027 and likely intends to have at least 1,000 warheads by 2030.” 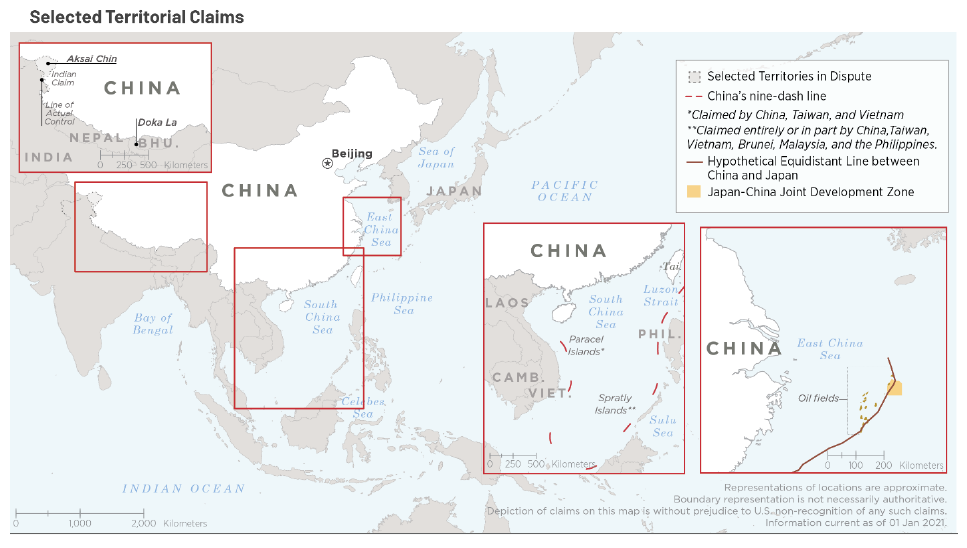 The report specifically notes a recent objective China placed on achieving certain modernizing initiatives by 2027, a target the Pentagon says could have implications for Taiwan.

“If realized, the PLA’s 2027 modernization goals could provide Beijing with more credible military options in a Taiwan contingency,” the report reads.

One of those modernization initiatives covers long-range strike capabilities.

“Throughout 2020, the PLA continued to pursue its ambitious modernization objectives, refine major organizational reforms, and improve its combat readiness in line with those goals,” the report reads. “This includes the PLA developing the capabilities to conduct joint long-range precision strikes across domains, increasingly sophisticated space, counterspace, and cyber capabilities, and accelerating the large-scale expansion of its nuclear forces.”