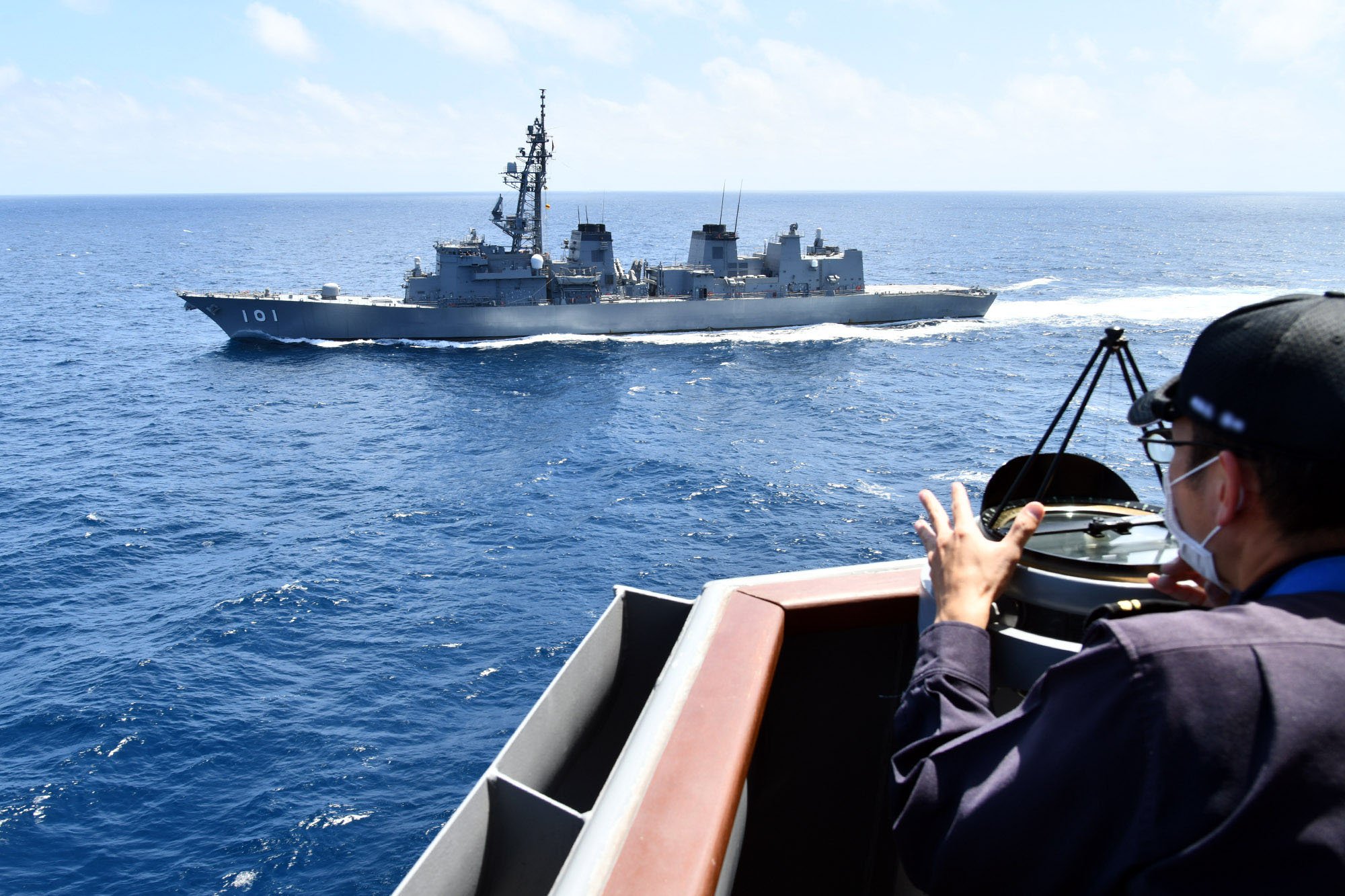 Japan’s view that its security is “inextricable tied” to Taiwan’s has gone from words to actions, as Tokyo for the first time is participating in exercises to deter Chinese aggression, an expert in Asia-Pacific affairs said Monday.

“Beijing has to make an estimate of U.S. and Japanese will” to defend Taiwan against overt aggression before it could switch its current tactics from psychological coercion, violations of Taiwanese airspace, and putting higher economic barriers on Taipei to an outright invasion, according to Patrick Cronin, the Asia-Pacific Security Chair at the Hudson Institute.

What Xi Jinping and the Central Military Commission would see right now are not words in a Japanese Ministry of Defense white paper signaling a shift in Tokyo’s view of roles and missions in securing a “free and open” Indo-Pacific, but Japan actively engaged with the United States and other partners, like the United Kingdom, “in realistic exercises” to deter Chinese military moves against itself and Taiwan.

He pointed out that Okinawa, home to large numbers of American and Japanese forces, is less than 500 miles from Taiwan, raising its value as a partner to Tokyo and Washington. “We have 50,000 troops in the region [close to Taiwan and the Chinese mainland] thanks to Japan,” Cronin said.

As China sent hundreds of fighter aircraft, some escorting bombers, into Taiwan’s air identification zone this weekend to mark Beijing’s National Day, Japan was participating in one of the largest naval exercises this year off Okinawa, with aircraft carriers from the United States and United Kingdom and surface ships from the Netherlands, Canada and New Zealand.

One component of the exercise was building the interoperability of forces in a crisis..

Joint Maritime Self-Defense Force Escort Flotilla 2 commander Rear Adm. Konno Yasushige said in an English-language JMSDF news release that it “will work closely with allied and friendly navies, which share the same objectives, to respond to global challenges and defend maritime order based on the rule of law.”

In Hudson’s online forum, Cronin said Japan’s white paper also marks changes in its maritime forces made possible by the introduction of advanced technologies into the Japan Self-Defense Forces, integrating air defense systems, the arrival of F-35B Lightning II Joint Strike Fighters, refitting helicopter destroyers to accommodate the F-35Bs and installing lithium batteries in its submarine force to give it greater range and stealth.

These shifts allow Japan to undertake broader missions and new roles in both its own security and the region’s security.

“Taiwan does enjoy natural and social advantages” in the continuing confrontation with China over the island’s future, said Scott Harold, senior political scientist at RAND. Separated by a strait that is about 100 miles wide, Taiwan also controls a number of islands off the Chinese coast that could pose an obstacle to an amphibious assault and a marshy terrain with large population centers on its eastern side and mountains on its west, making invasion more problematic for Chinese planners. In addition to having 70 years to prepare for a possible invasion, a growing number of Taiwan’s population see themselves first as Taiwanese and not Chinese, and are less interested in closer ties to Beijing.

While Taiwan has picked up the pace of professionalizing its forces, it still needs to look at how best to employ its reserves and improve continuity of government procedures to provide resilience in case of direct attack, the panelists agreed.

But Taipei also “has partners who recognize” its value in the geopolitics of Indo-Asian security, he added. In the case of the United States, Taiwan’s security “is not Afghanistan” repeated.

As to whether Xi will invade during the “Davidson window,” sometime before 2027, Cronin said it could come down to whether Xi wants to leave a legacy of bringing Taiwan totally under Beijing’s control. In that case, it would be possible to “win the battle and lose the war” by invading the island.

Harold added China’s weekend display of potential military force to get its way with Taiwan didn’t help its image across the Indo-Pacific.

Cronin was referring to testimony retired Adm. Phil Davidson, who at the time led U.S. Indo-Pacific command, delivered earlier this year to Congress on his estimates of the risk of invasion.

“China is a great power,” Cronin said. “It doesn’t need to suffocate democracy in Taiwan.”