One of the six armed forces, the U.S. Coast Guard is a multimission maritime military service within the Department of Homeland Security (DHS). It is responsible for implementing 11 statutory missions. One mission—Defense Readiness—requires the Coast Guard to maintain the training and capability needed to integrate with Department of Defense (DOD) forces.

The Coast Guard deploys vessels, aircraft, and personnel to support DOD geographic combatant commands. For example, the Coast Guard’s Patrol Forces Southwest Asia command in Bahrain—the largest unit outside the United States—supports DOD’s U.S. Central Command with six cutters and the personnel to operate and maintain them.4 The Coast Guard’s defense role has garnered attention in recent years. Notably, in May 2021, one of its Bahrain-based cutters fired warning shots at Iranian naval vessels while escorting a Navy submarine through the Strait of Hormuz.

Section 8247 of the National Defense Authorization Act of 2021 included a provision for GAO to review Coast Guard resource allocations for its Defense Readiness mission.5 To address this provision, this report describes the Coast Guard’s deployment of vessels and aircraft and associated operating expenses for its Defense Readiness mission compared with those for its other statutory missions for fiscal years 2011 through 2020—and how they relate to its funding for these years. 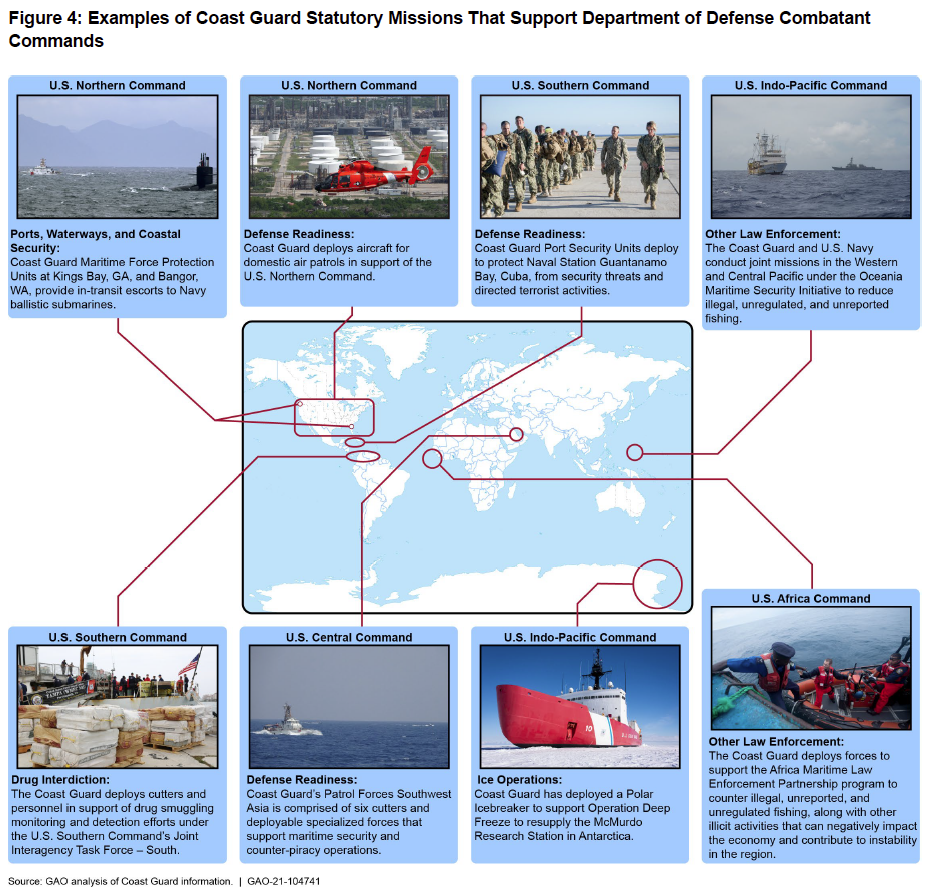 To determine Coast Guard deployments, we analyzed Coast Guard vessel and aircraft operational hour data for each of its 11 statutory missions and commitments of forces to support DOD combatant commands for fiscal years 2011 through 2020. We also analyzed documentation, such as Coast Guard annual operational plans. To determine the Coast Guard’s operating expenses and funding, we analyzed the service’s Mission Cost Model operating expense estimates for its 11 statutory missions, appropriations, and DOD reimbursements for fiscal years 2011 through 2020. We determined that control activities and quality information were significant for ensuring the reliability of the data. We interviewed relevant agency officials, reviewed related documentation, and assessed the data for missing data and obvious errors. We determined that the vessel and aircraft operational hour data and Mission Cost Model estimates were sufficiently reliable for the purposes of analyzing resource use over time.