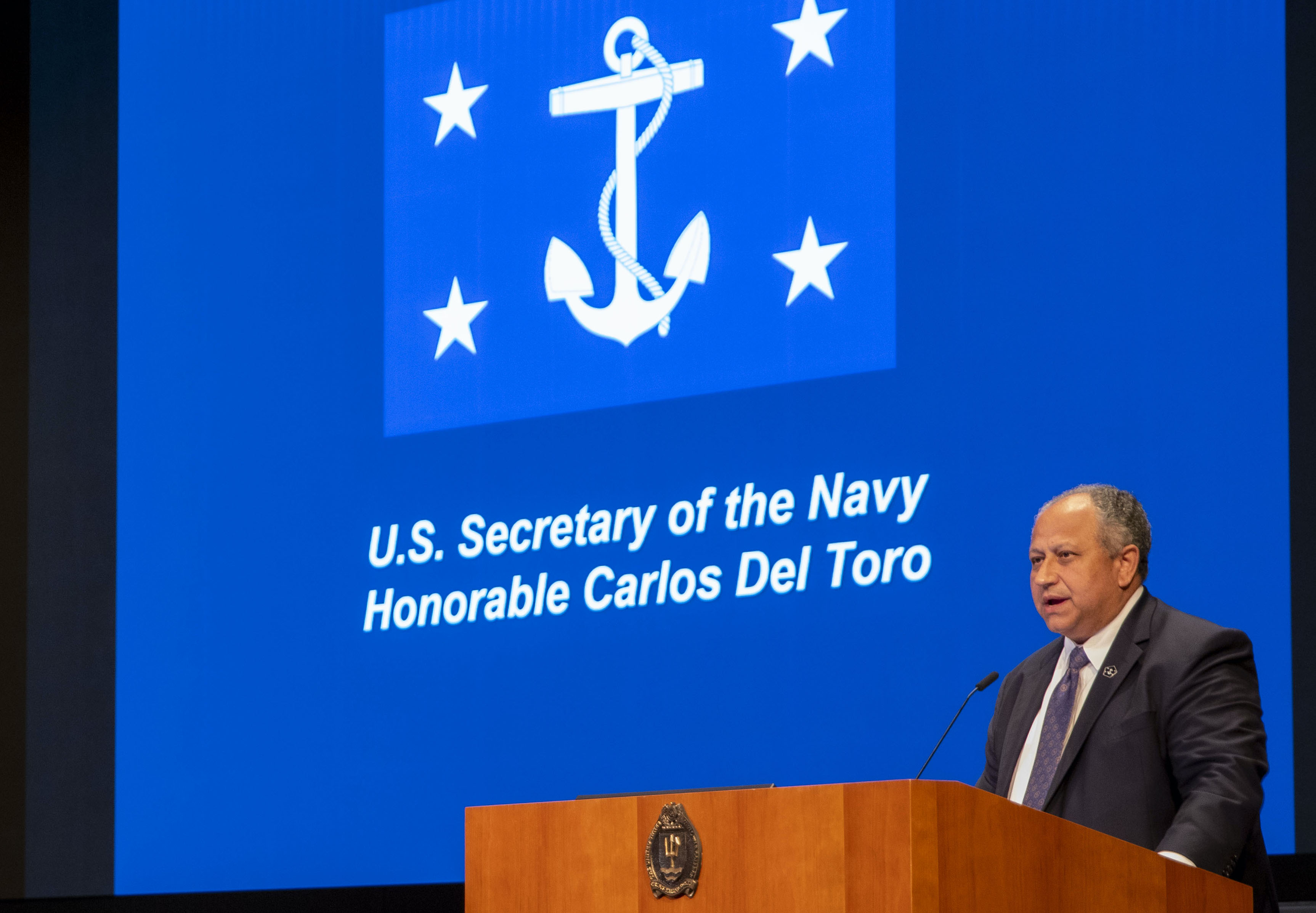 NEWPORT, R.I. — The leaders of the U.S. Navy entreated a global audience of international navies to uphold international freedom of navigation, as China and Russia have challenged international maritime norms.

Navies from more than hundred countries assembled in person and virtually for the International Seapower Symposium at the Naval War College, R.I., as both Moscow and Beijing have challenged freedom of navigation in recent months.

“The very bedrock of civil society is under assault, particularly in the Indo-Pacific. Echoes of Cold War aggression are on the rise in the skies, on the surface and under the seas,” Secretary of the Navy Carlos Del Toro said in a speech at the conference.
“Every nation has the right to navigate the sealanes and the skies in accordance with international laws but no nation has the moral high ground to deny these rights to its peaceful neighbors. No nation has the right to claim long-standing international waters as their own.”

Later in remarks to USNI News, Del Toro said that the U.S. serves as an “equal partner” with other navies in maintaining the international laws.

“It’s not just about America being the leader in these global diplomatic allied partnerships, it’s about us being an equal partner with all of these nations that are here today,” Del Toro told USNI News. “We must all work together, we need to better understand the challenges that all these nations face in their regions. We should put ourselves in their shoes and understand that the economic challenges they have, the national security challenges that they have, and that it’s important for all of us to work together … It’s not just about their collaboration just with the United States, it’s about their collaboration with each other.”

The biennial conference, delayed from 2020 due to the global COVID-19 pandemic, comes as China and Russia have pushed against parts of the United Nations Law of the Sea Convention in recent months.

Earlier this month, China issued a sweeping new series of maritime laws that require prior notification to Beijing of certain types of ships and cargo moving through vaguely defined Chinese territorial waters.

The restrictions in the new rules from Beijing, an amendment to a 1983 safety law, affect wide swaths of the Western Pacific and “would illegally restrict freedom of navigation in the South China, East China, and Yellow Seas where China is embroiled in a number of disputed territorial and maritime claims with its neighbors,” according to a summary of the legal implications published by the Naval War College.
“China will use the amended law to engage in grey zone operations to intimidate its neighbors and further erode the rule of law at sea in the Indo-Pacific region.”

Russia has also challenged basic tenants of the U.N. Law of the Sea Convention. In June, Russian ships and aircraft harassed the U.K. Royal Navy warship HMS Defender (D36) when it sailed through an international transit corridor near Crimea.

Chief of Naval Operations Adm. Mike Gilday told reporters on Wednesday that the U.S., particularly in the Indo-Pacific, wanted to isolate nations that would diverge from existing maritime laws.

“We all come together and force these norms that we’ve all benefited from. It’s day in and day out, executing those freedom of navigation operations, sailing side by side with allies and partners. That’s what like-minded navies do,” Gilday said. “And over time, our hope is that some of those countries that are trying perhaps to set an alternative framework to the international norms that have been established for the past seven plus decades… remains a very isolated group of countries.”

Gilday compared the ISS to the U.N. in how the collected group of navies solved international maritime problems.

“The U.N. provides a level playing field, and most importantly, for those small nations who share in those common problems as large navies or large nations, but also may have uncommon solutions that the big nations may not have thought of,” he told reporters and referred to former CNO Adm. Mike Mullen’s 1,000-ship navy concept.
“I think about the 1000-ship Navy and the power of that. And I say, why not a 10,000-ship Navy?”