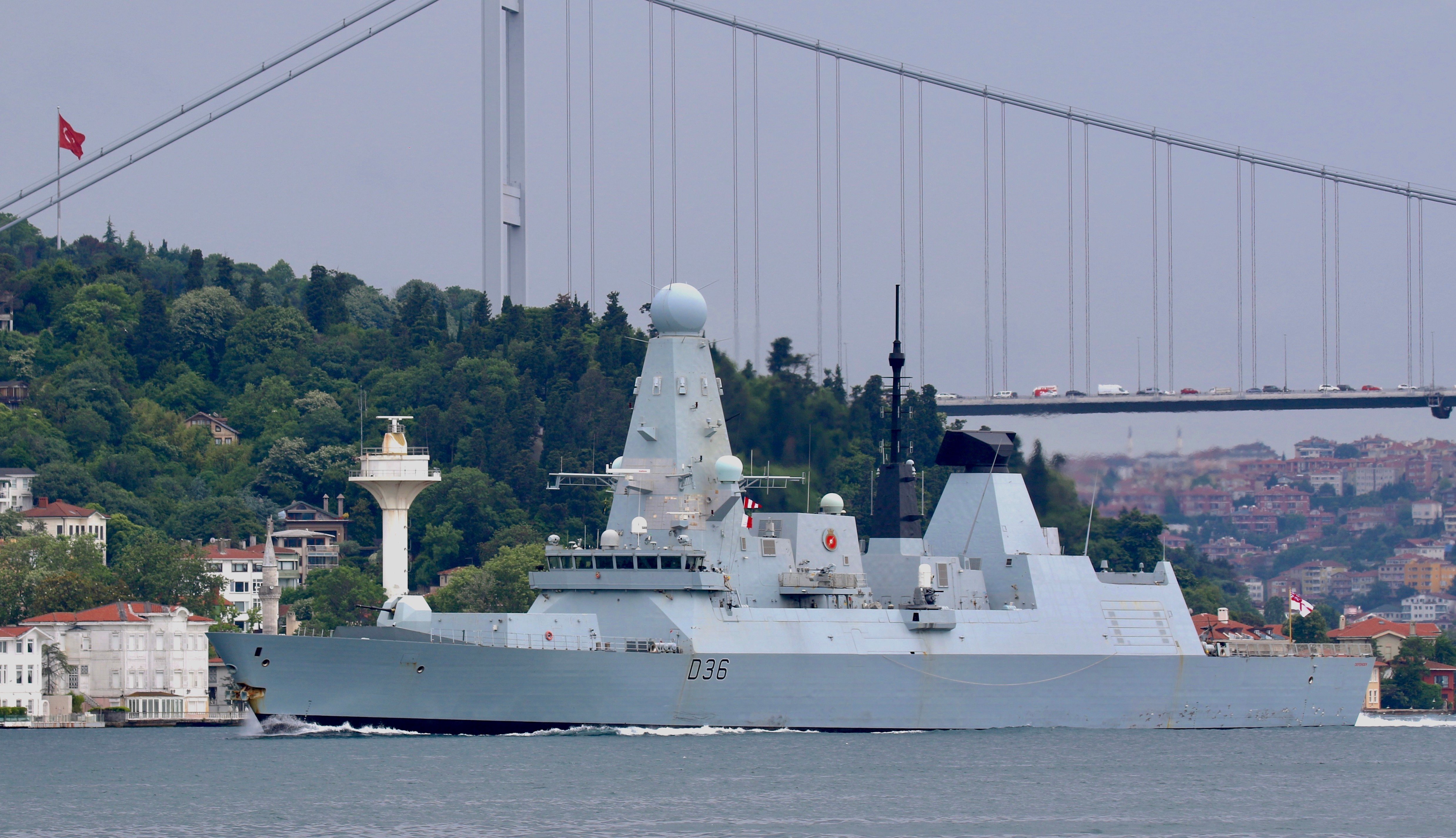 This post has been updated with Russian military video showing additional details of the transit.

Russian fighters and warships did not fire warning shots or drop bombs to warn off U.K. warship HMS Defender (D36) operating in the Black Sea, the U.K. Ministry of Defense said in a Wednesday statement to USNI News.

“This morning, HMS Defender carried out a routine transit from Odessa towards Georgia across the Black Sea,” said U.K. MoD head Ben Wallace in the statement.

“As is normal for this route, she entered an internationally recognized traffic separation corridor. She exited that corridor safely at [4:45 a.m.] As is routine, Russian vessels shadowed her passage and she was made aware of training exercises in her wider vicinity.”

Earlier on Wednesday, Russian military officials told state-run Interfax a combination of Russian fighters and warships had expelled Defender from waters two miles off the coast of the Moscow-seized territory of Crimea near the Russian Black Sea Fleet headquarters in Sevastopol. Moscow claimed a border patrol ship fired warning shots at the destroyer and a Su-24 Fencer dropped four high explosive bombs in the path of the warship.

“The destroyer had been warned that weapons would be used if it trespasses the border of the Russian Federation. It did not react to the warning,” the Ministry said, as reported by Interfax.
“The Black Sea Fleet acting together with the Border Service of the Russian Federal Security Service put an end to the Russian state border violation by the British Navy destroyer HMS Defender.”

Russian military video of the transit obtained by USNI News shows fighters buzzed the ship during the transit.

In a subsequent statement responding to the Russian ministry’s comments, the U.K. MoD said Defender was conducting an “innocent passage” past Ukrainian territorial waters and the Russians were conducting a previously announced gunnery exercise nearby. 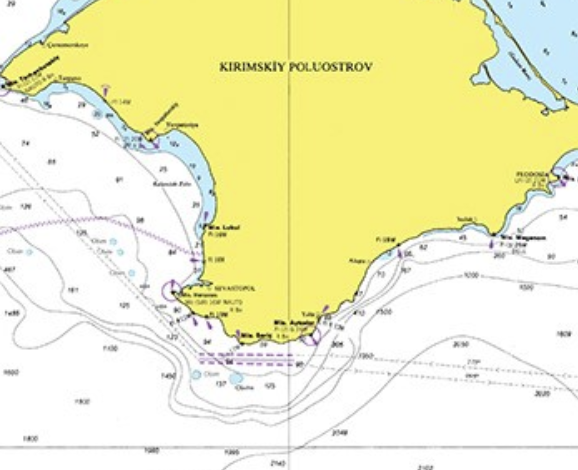 A view of the maritime traffic separation scheme south of Crimea, near where Russians claimed they chased off a U.K. warship. Landfall Image

“No warning shots have been fired at HMS Defender,” read a tweet from the U.K. MoD at 8:04 a.m.
“We believe the Russians were undertaking a gunnery exercise in the Black Sea and provided the maritime community with prior-warning of their activity. No shots were directed at HMS Defender and we do not recognize the claim that bombs were dropped in her path.”

USNI News understands Defender was in direct transit between Odessa and Georgia and had been warned by Russian officials about the gunnery exercise and military aircraft operating near the U.K. warship. The warship was operating in an internationally recognized maritime route to the south of Crimea that is within 12 nautical miles off the coast of Cape Fiolent.

An AIS track believed to be Defender showed the warship came no closer than 10 nautical miles of the coastline of Crimea.

A BBC reporter was aboard Defender during the transit and described harassment from Russian forces and sent a report.

“This would be a deliberate move to make a point to Russia. HMS Defender was going to sail within the 12 mile (19km) limit of Crimea’s territorial waters. The captain insisted he was only seeking safe passage [through] an internationally recognized shipping lane,” reported Jonathan Beale.
“Two Russian coastguard ships that were shadowing the Royal Navy warship, tried to force it to alter course. At one stage one of the Russian vessels closed in to about 100m (328ft).” 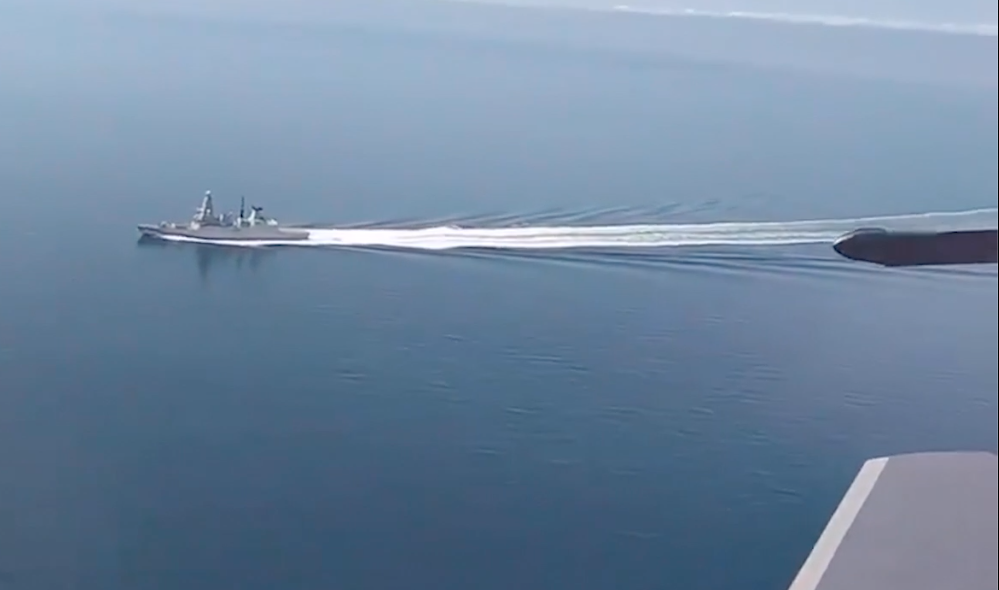 Russian military video of HMS Defender off the coast of Crimea.

Beale also said that Russian fighters had buzzed Defender several times but did not say they had dropped bombs.

Video from a Russian fighter and a military drone released by pro-Kremlin news service Zvezda back up Beale’s account showing two patrol craft trailing Defender while at least two fighters fly by the destroyer.

The U.K., the U.S. and several other countries do not recognize Russia’s claim to a territorial sea around Crimea and view it still as belonging to Ukraine.

While the MoD did not specify the nature of the transit or its location, “innocent passage” of a warship inside any territorial sea is allowed under the U.N. Law of the Sea Convention.

The rules allow a warship to pass through a 12 nautical-mile territorial sea with no warning, as long as it conducts no military operations, launches boats or aircraft and does not linger. In the past, the U.S. has used innocent passage to contest claims of Chinese holding in South China Sea as part of its Freedom of Navigation operations.

This incident comes after USNI News reported the automatic identification system (AIS) track of Defender and HNLMS Evertsen (F805) were falsified on June 18 to show a passage off Crimea much closer to the entrance of the naval base in Sevastopol. The warships were, in fact, in port in Odessa, verified by a web camera pointed at the port. 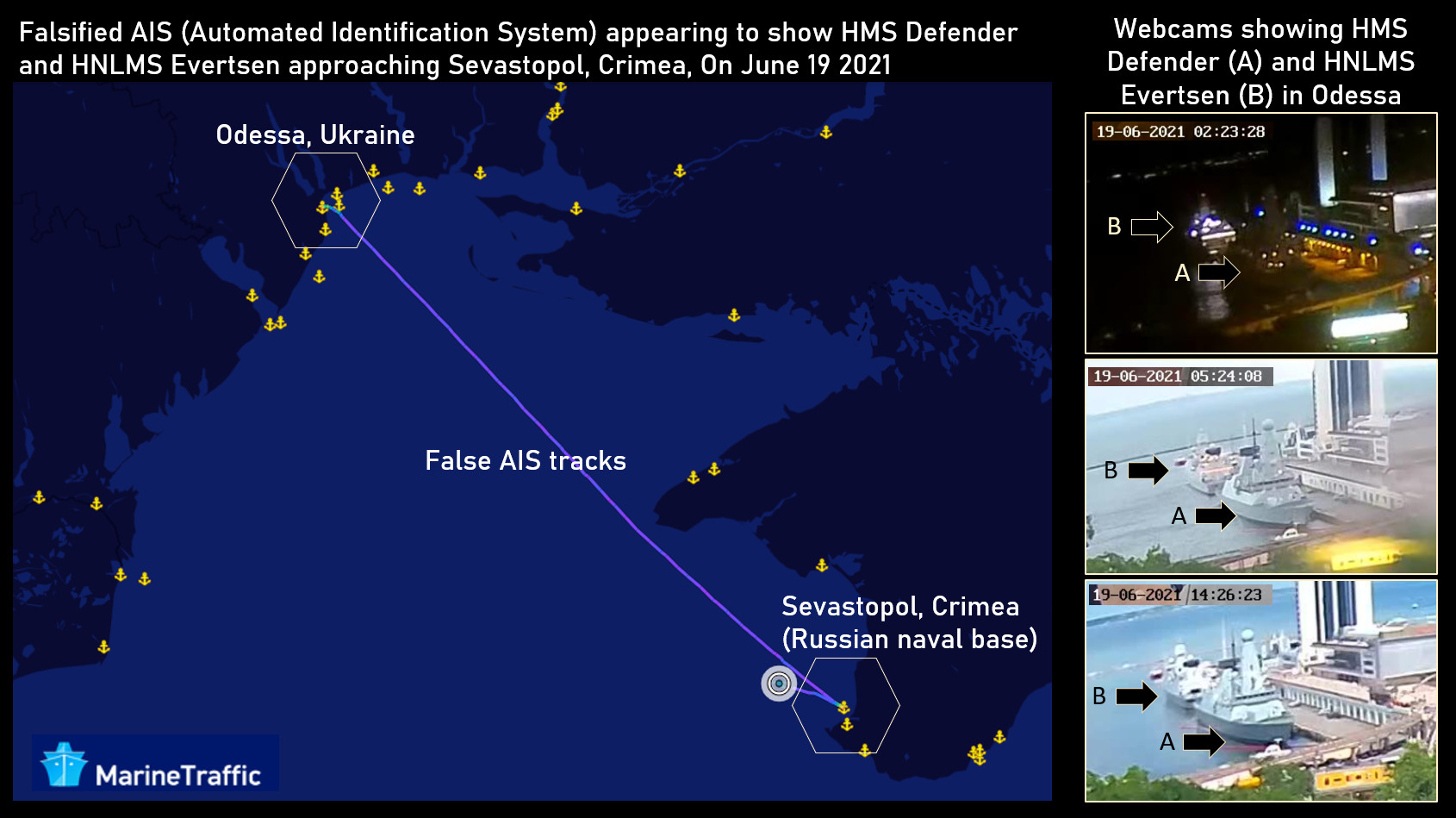 The two warships are deployed as part of the U.K. Royal Navy’s Queen Elizabeth Carrier Strike Group, CSG21, and have been operating in the Black Sea since June 14.