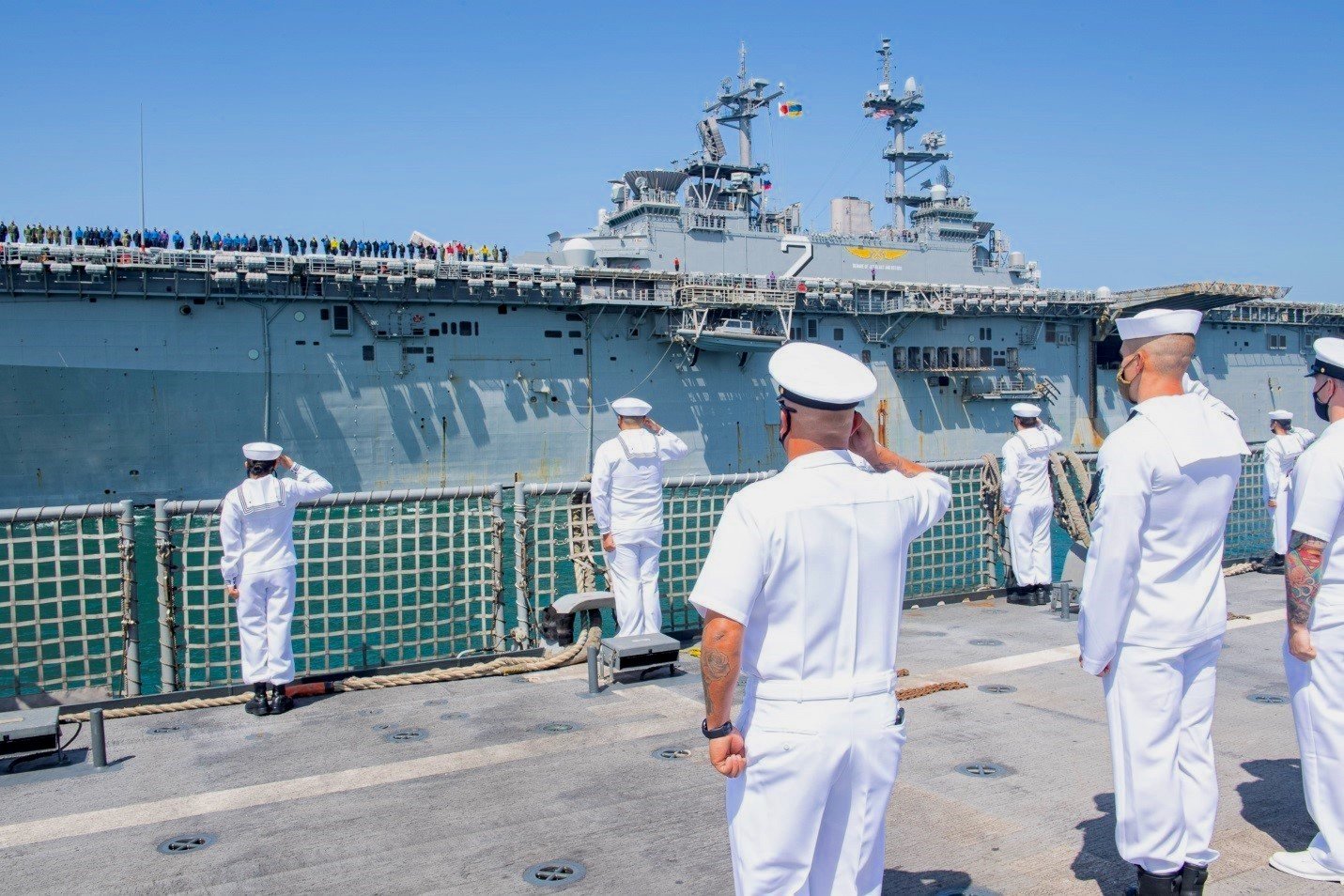 USS Essex (LHD-2), amphibious transport dock USS Portland (LPD-27), and amphibious dock landing ship USS Pearl Harbor (LSD-52) left San Diego on Aug. 12 with the 11th Marine Expeditionary Unit embarked and entered the North Arabian Sea on Sunday. The ARG took a direct route across the Pacific and the Indian Ocean before crossing into the 5th Fleet after joining in the Large Scale Exercise 2021 on the West Coast.

Meanwhile, the Iwo Jima ARG has begun to transit back toward the East Coast after supporting the U.S. military exit from Afghanistan since entering 5th Fleet in June.

The group left the East Coast in late March and operated extensively around the U.K. before transiting the Mediterranean Sea and the Suez Canal.

As of Monday, USS Iwo Jima (LHD-7), USS Carter Hall (LSD-50) and USS San Antonio (LPD-17) with the embarked 24th MEU was heading toward the Bab el-Mandeb strait, according to the USNI News Fleet and Marine Tracker.

About 2,000 Marines from the 24th MEU were moved from the ARG to Kuwait and then to Kabul for the non-combatant evacuation operation from the Hamid Karzai International Airport in Afghanistan. A Marine from the MEU — Sgt. Nicole Gee — was killed in an Aug. 26 ISIS-K attack, along with 10 other Marines, a soldier and a sailor.

The Camp Lejeune, N.C.based 24th MEU is made up of the Battalion Landing Team (BLT) 1/8, Combat Logistics Battalion (CLB) 24 and the Medium Tilt-Rotor Squadron (VMM) 162 Reinforced, as well as a Light Armored Reconnaissance detachment.

The Ronald Reagan Carrier Strike Group has been in U.S. 5th Fleet since late June to support the Afghanistan withdrawal. The U.S. has kept a carrier on station, mostly in the North Arabian Sea, since May of 2019 at the request of the U.S. Central Command commander Gen. Kenneth
McKenzie. The Japan-based USS Ronald Reagan (CVN-76) was shifted to the region rather than its typical patrol area in the Western Pacific.

How long a carrier will remain in the Middle East is an open question. Following the withdrawal of U.S. military forces from Afghanistan, the Pentagon has pledged an “over the horizon” capability for counterterrorism strikes in the region. Some of those assets, manned and unmanned, would be flown from U.S. bases near the Persian Gulf in addition to strikes a carrier.