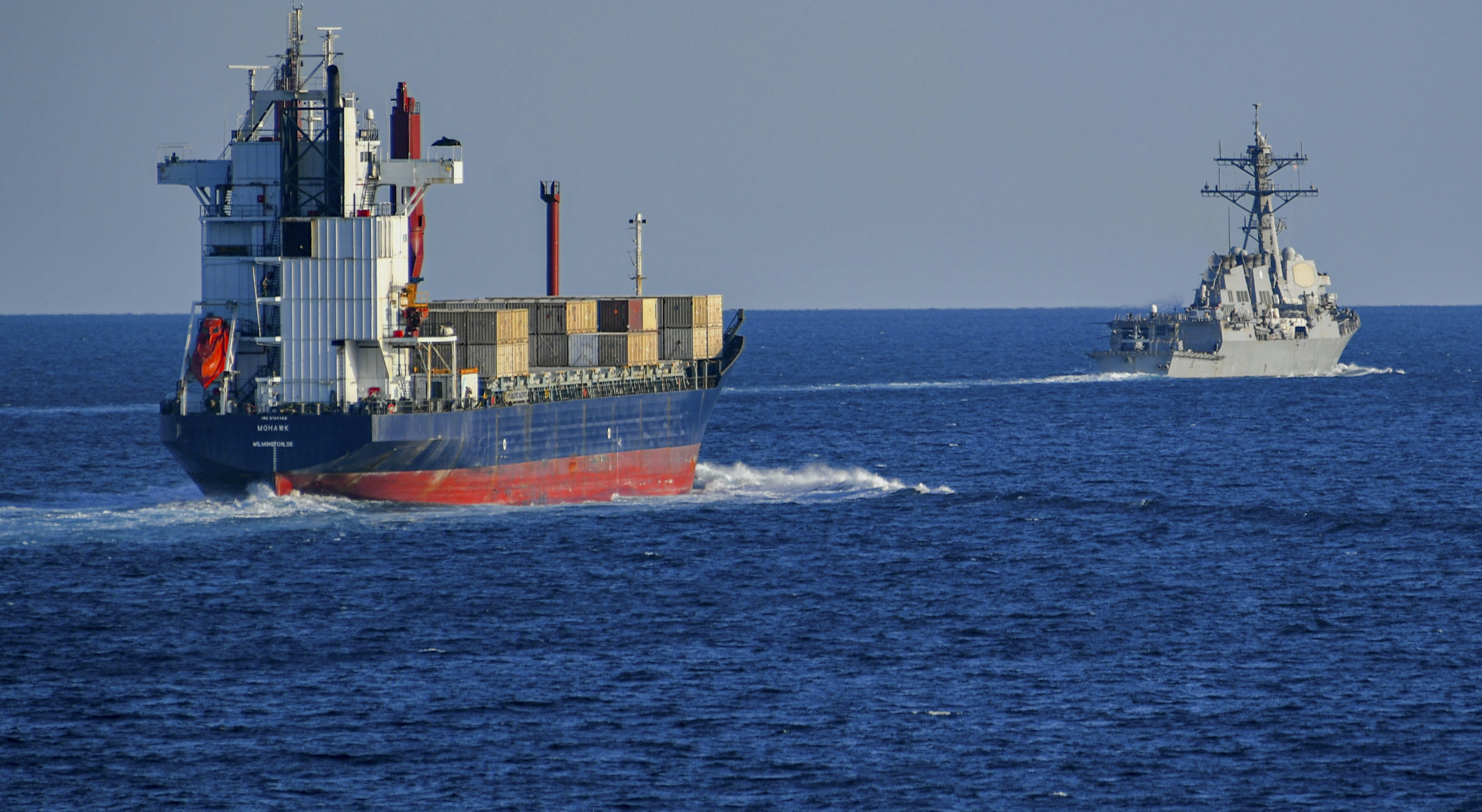 USS Lassen (DDG-82) escorts the merchant vessel Tomahawk through the Strait of Hormuz on Nov. 18, 2019. US Navy Photo

Communications are especially vulnerable in MARAD’s fleet because those ships “rely on commercial systems,” Douglas Harrington, associate director of federal sealift, told attendees at the Navy League’s 2021 Sea-Air-Space meeting. In a contested environment, “we have to build in resilience” and train crews how to operate under those conditions on older vessels.

“We want to have strong communications … to get warnings out to other mariners” about changing conditions – from jamming to drone attacks and pirates “that affect the safety of navigation,” Harrington added.

In the Ready Reserve Fleet, which must be able to get underway in five days, vessels still rely on commercial voice and data communications systems that are vulnerable to interference and give away location.

Harrington said, “we need to modernize our fleet and our mariners” to operate under those changed conditions, but “resources are the issue.” He also said changing access for personal communications aboard these ships affects crew morale.

But “the reality is, the environment can change in a moment,” he added.

In Desert Shield/Desert Storm, “we went with what we had” in the fleet and didn’t worry about cyber-attacks, Christopher Thayer, MSC’s director of maritime operations, added, but they were not facing today’s challenges. As the “intersection between the Navy and the merchant marine,” MSC “must be prepared to operate” without escorts to meet mission requirements.

MSC is looking at developing mobile communication systems, greater use of iridium satellite phones “and other technologies to limit intrusions,” he said, adding, “These are the things necessary” now.

Thayer also said the model MSC follows in manning its ships should be re-examined. “It’s a model that’s not ideal [because] it doesn’t put people to sea” in existing union training practice, he said.

In this regard, Peterson said APL [formerly American President Lines] has advantages. Its marines work on modern vessels like LNG tankers and are “constantly exposed” to risks of sailing in “dispersed operations” for safety.

Addressing the aging Ready Reserve Force, Erica Plath, director of strategic mobility/combat logistics division in the Office of the Chief of Naval Operations, said her office is “most focused on [MARAD’s] buying two used ships as part of its major recapitalization program.”

Buying those first two will provide MARAD purchasing experience needed for recapitalizing its fleet, Harrington said. He added the $638 million contract with Crowley draws on its expertise in acquisition to increase “modernization and readiness” in MARAD and eliminate the “fits and starts” that marked its earlier efforts to recapitalize.

MARAD expects to receive a list of what best meets its requirement for roll-on, roll-off vessels by the end of 2021.

But a strong merchant marine remains critical for warfighting. Plath estimated “90 percent of material” needed for a conflict would move by sea.

Peterson said, “there are other countries out there that put great importance on maritime industry and logistics” and that means paying attention to more than the age and condition of ships.

When looking at strategic sealift, he said, “it’s the entire network” of ships, port, rails and trucks used to get cargo where it is needed.

The COVID-19 pandemic showed the U.S. public the vulnerability of supply chains for everything from “PPE to toilet paper” to meet domestic needs.

It also showed how sharp the decline has been in American-flagged shipping, down from 2,900 in 1960 to 182 now, Peterson said.

“How do we change this? Cargo,” he added.

Peterson said the number of ships depends on the amount of cargo available. Harrington made the same point, and said it also provides necessary experience for masters and mariners.

While autonomous vessels hold promise for the future, Thayer said he doesn’t believe they “are going to refuel themselves” any time soon, meaning mariners’ presence is still needed.

It requires more than cargo preference laws, Peterson said, but also for U.S. manufacturing to look at American-flagged vessels when considering shipping options.

“We have to keep these ships in service to get cargo to our forces” when they are deployed, he said.