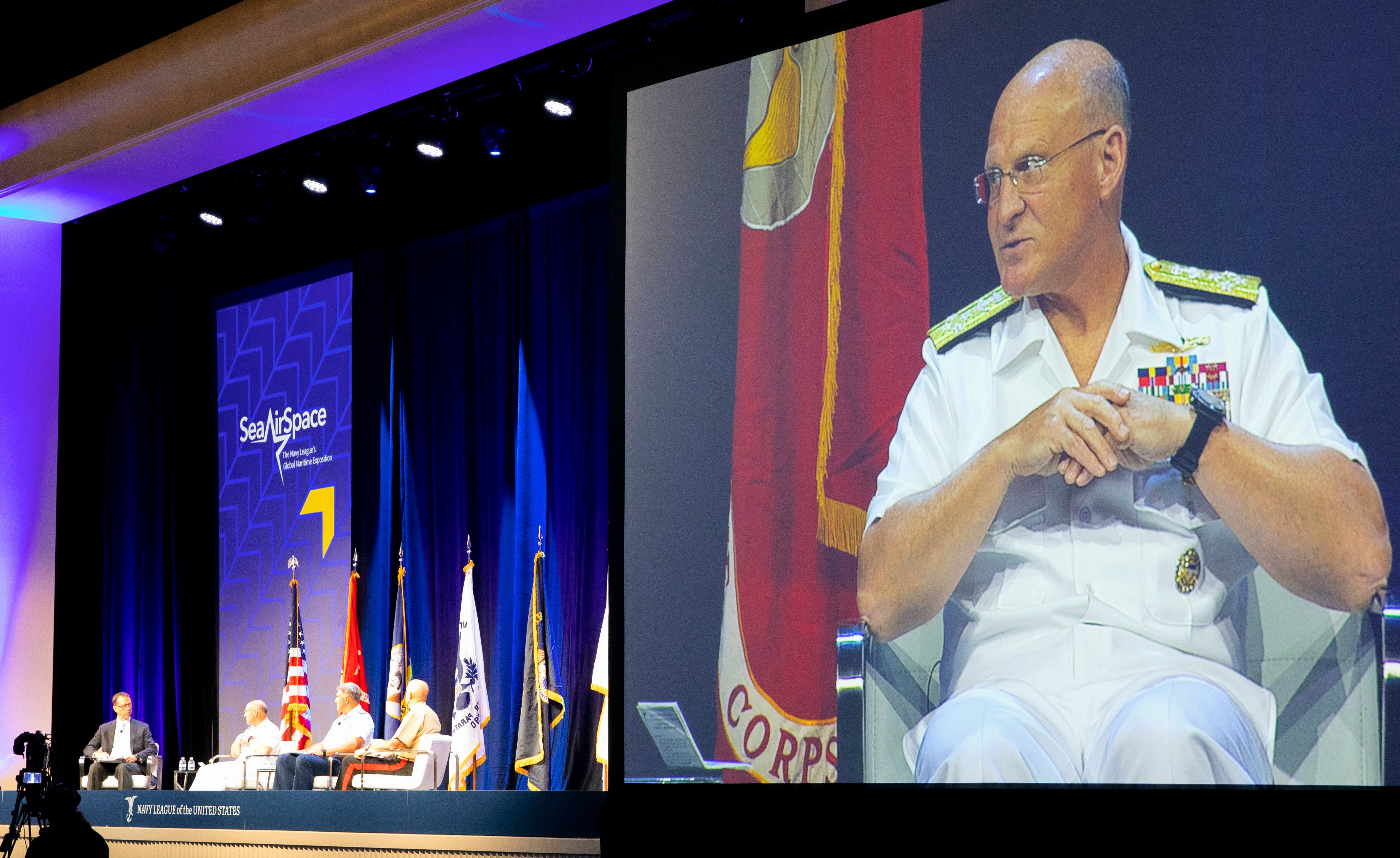 “It’s not the 90s anymore,” Chief of Naval Operations Adm. Mike Gilday said today at the Navy League’s 2021 Sea-Air-Space conference. What is needed is a sense of urgency when it comes to shipbuilding, maintenance and being pushed by Congress into “buying aircraft we don’t need.”

“It’s not helpful,” he said of industry pressure pushing Capitol Hill on “what we build, how we build” and timelines.

Gilday said “in this decade we need to really go after” readiness, training and capacity systems as laid out in the service’s “navigation plan.” He added the plan is bigger than shipbuilding.

Looking at innovation from the Marine Corps perspective, Commandant Gen. David Berger stressed “the human element,” asking rhetorically “how do we prepare them for the future.” Noting that he was speaking on the anniversary of Iraq’s invasion of Kuwait, he added, “I don’t think anyone on this stage thinks we’re going to have 167 days” to position forces before acting.

“In our domain, there aren’t do-overs,” he said.

Berger called for more wargaming, experimentation and exercises “to force out leaders to have to make decisions under pressure.” Gilday stressed the “accountability” of individual sailors and Navy leaders providing the “right training at [the] right time” to sailors.

“We think [constructive training] is a path to the future,” Gilday said, noting 25,000 sailors are participating in the largest Live, Virtual and Constructive (LVC) exercise in decades. “Learning by doing is good,” Berger said, “but it is not going to be enough.”

Citing naval theorist Alfred Thayer Mahan, Coast Guard Commandant Adm. Karl Schultz said the nation has a history built on understanding the importance of the sea and in building new markets. He noted the Coast Guard is in the midst of the “largest shipbuilding program since World War II” to meet its missions domestically and “in the away game,” in the Indo-Pacific region.

“We’re playing catch-up” in modernizing the Coast Guard’s fleet. “This White House sees the Coast Guard as part of the future,” Schultz said, noting he is “cautiously optimistic” about continued investment in sustainment and modernization.

Looking at applying technology now, Berger said junior officers and enlisted are “ready to run … to use information systems.” The “problem is use.” He said a changed approach to assess training would help.

Berger added this would be very much in keeping with Adm. Ernest King’s pre-Pearl Harbor drive to have commanders break out of staff thinking “to act on their own.” Gilday said the Navy modified our training to ensure commanders, even of patrol craft, are aware they are going to be in contact with Russian, Chinese and Iranian maritime forces.

As to moving technologies from unmanned systems to artificial intelligence quickly to the field, Berger said, “we need to be willing to use something we have now” and not wait until a technology is matured.

Gilday was more cautious about unmanned systems’ role immediately. The issue comes down to “commander’s intent.” He added, “we need to nail that down.”

Schultz said, “we bring something to the fight” and competition with China in the Indo-Pacific – from Mobile Training Teams in Oceania and Southeast Asia to physical presence with its National Security Cutters.

The teams are in Malaysia, Indonesia and Vietnam and other nations “to bolster their own forces” in enforcing fishing and environmental laws and establishing maritime awareness.

Berger said American military training with allies and partners need to avoid hubris that the U.S. “solution set” was the only way. “You have to meet these countries where they are now,” he said.

Chinese bullying on its extensive territorial claims and ignoring international court rulings against is causing it to “become more and more isolated,” Gilday said. “We’ve got the moral high ground [and]we’re not going to yield it.”

“The way we were doing things in the past isn’t going to work in the future,” Gilday said, referring to industry from shipbuilding and maintenance to aviation.