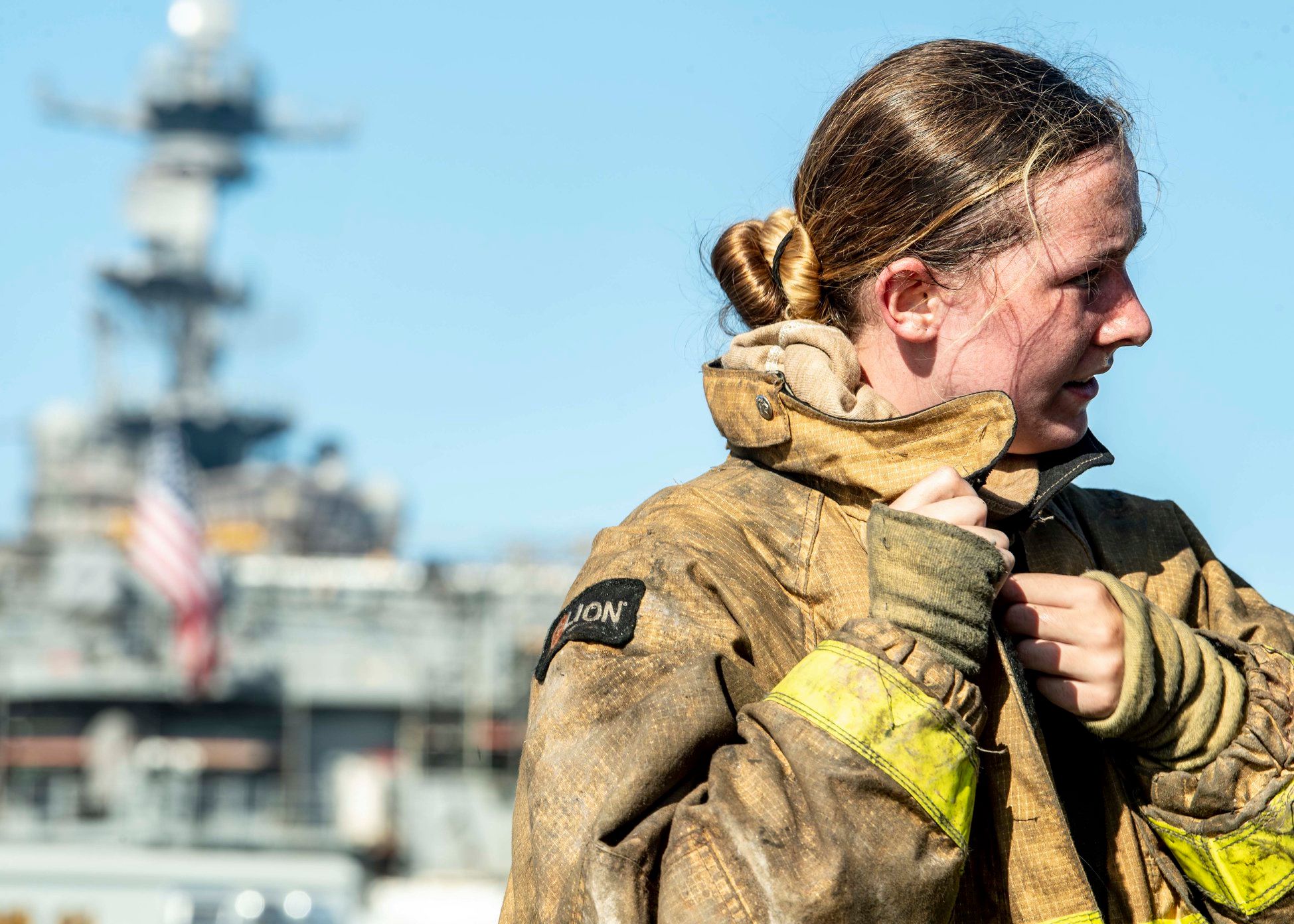 THE PENTAGON – Lessons from the fire that took out a 40,000-ton U.S. warship are trickling out into the fleet a year after the blaze, the head of U.S. Naval Surface Force told reporters this week.

While the results of the official investigation of how the Navy lost the former USS Bonhomme Richard (LHD-6) likely won’t be made public until September, the Naval Surface Forces have moved to tighten up fire safety on the pier and in the maintenance yard, Vice Adm. Roy Kitchener said.

For starters, after the fire, SURFOR assessed compliance with fire guidance laid out by Naval Sea Systems Command for ships in maintenance and found gaps.

“We found that in some cases maybe we weren’t doing as well as we should have,” he said.
“We’re pretty good at firefighting at sea and all those procedures. When we got to the industrial environment, it was ‘OK, looks like we need to kind of make sure there’s a little bit of education’.”

Fires, while a ship is in maintenance, are often harder to fight than those at sea. Fewer crew members are aboard to fight a blaze, larger ships could be jammed with scaffolding impeding movement through the ship, and hatches are almost always left open, allowing the fire to quickly spread through a hull.

As the Navy has pushed more ships into repair yards to catch up on years of put-off maintenance, fires during maintenance have become a persistent issue beyond the four-day blaze on Bonhomme Richard. Earlier this month, USS Gettysburg (CG-64) suffered a hot work fire at a maintenance yard in Norfolk that left four sailors with minor injuries.

SURFOR beefed up its safety staff and added a mix of civilian and military fire marshals to check ships on the waterfront and in the yard.

“Their job is to go out, [and] evaluate the training that the ships are doing to fight fires in an industrial environment, because it is different. They’re out there, ensuring that the waterfront maintenance people, along with the private contractors, and the ship’s crew are doing their proper safety inspections. And if there’s resources that they need, if there are things that we’re missing, then we should do it,” Kitchener said.

“One of the things we found was, we made some significant investments and in sort of high-end fire detection systems that we now install on ships, because in some cases, we bring systems down, and we wanted to make sure there were no gaps, or if they were going to bring [systems] down, that we had something there to back them up.”

The improvements included the additional capability to detect fires on ships and more training for prospective commanders and ahead of availabilities.

“We put in some training up at the schoolhouse in Newport, for our people going out to command. [When] we do our availabilities, before we start, we put in a checkpoint where we now have the contractor, representatives from my staff, the CO, and there’s an education piece there,” he said.

In September, the command will run a fire drill at Vigor’s maintenance yard in Seattle.

“They’ll do an integrated drill with Fed fire, Seattle Fire Department, the ship’s force and the shipyard,” he said.