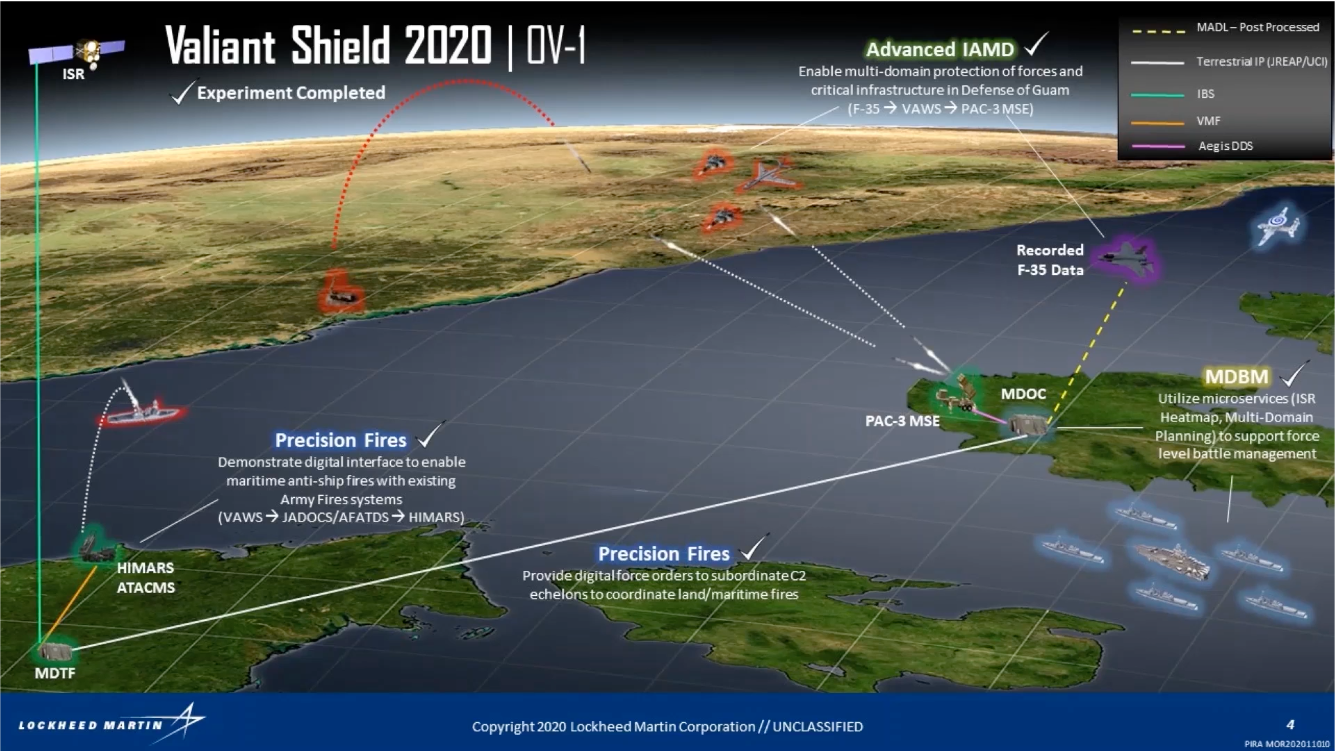 Last year, U.S. Indo-Pacific Command quietly packed the combat system from a guided-missile destroyer into about the size of a footlocker, took it ashore and hooked it up to an Army artillery unit, an Air Force command node and an F-35 Lighting II Joint Strike Fighter.

Last September, INDO-PACOM used the Virtualized Aegis Weapon System (VAWS) in an experiment to see if the combat management technology of the sea-based Aegis could be used by Army and Air Force units, Lockheed Martin software engineers said during the WEST 2021 conference, cohosted by the U.S. Naval Institute and AFCEA. The experiments used VAWs to route targeting information used by destroyers and cruisers with an Army High Mobility Artillery Rocket System (HIMARS) unit and a PAC-3 missile defense system instead.

During the September 2020 exercise, VAWS – developed in part by the Navy’s Program Executive Office Integrated Warfare Systems (PEO IWS) – was installed at the Pacific Air Forces’ multi-domain operations center (MDOC) in Hawaii and routed information to the Army’s 17th Field Artillery Brigade, which was functioning as a multi-domain task force (MDTF) at Andersen Air Force Base in Guam.

“We used a traditionally naval Aegis combat system software in a virtualized computing environment to send digital force orders between the MDOC in Hawaii and our counterparts at the MDTF in Guam. So, we coordinated land and maritime fires in that way,” engineer Alex Bui said at the conference.
“We were able to demonstrate VAW’s ability to enable maritime anti-ship fires with existing Army fire systems, specifically the HIMARS launcher.”

VAW provided targeting information to the HIMARS launcher to simulate a strike on an anti-ship target.

In a separate experiment, information from an F-35 was routed through VAWS to cue a PAC-3 missile defense system.

“That involved recorded F-35 data from a demonstration in December of 2019, that recorded data was sent to our VAWS C2 node in the MDOC in Hawaii and that was integrated to an interface with the PAC 3 mission controller to simulate that entire defensive kill chain across the services again, Navy and Army,” Bui said.

Lockheed Martin has experimented with using the sensors on an F-35 to provide targeting data to missiles launched from the shore. Previously, the company has tested using data from an F-35 to target an SM-6 in a successful intercept.

In addition, the information collected and synthesized by VAWS provided a common operating picture as part of the wider Valiant Shield battle network for the joint force.

“Project Overmatch will provide that architecture for us to connect all our systems – whether they’re unmanned or manned – in the future in a more robust manner to include both the Marine Corps and the Navy contribution to that naval fight,” Vice Adm. Jim Kilby, the deputy chief of naval operations for warfighting requirements and capabilities (OPNAV N9), said on Tuesday.