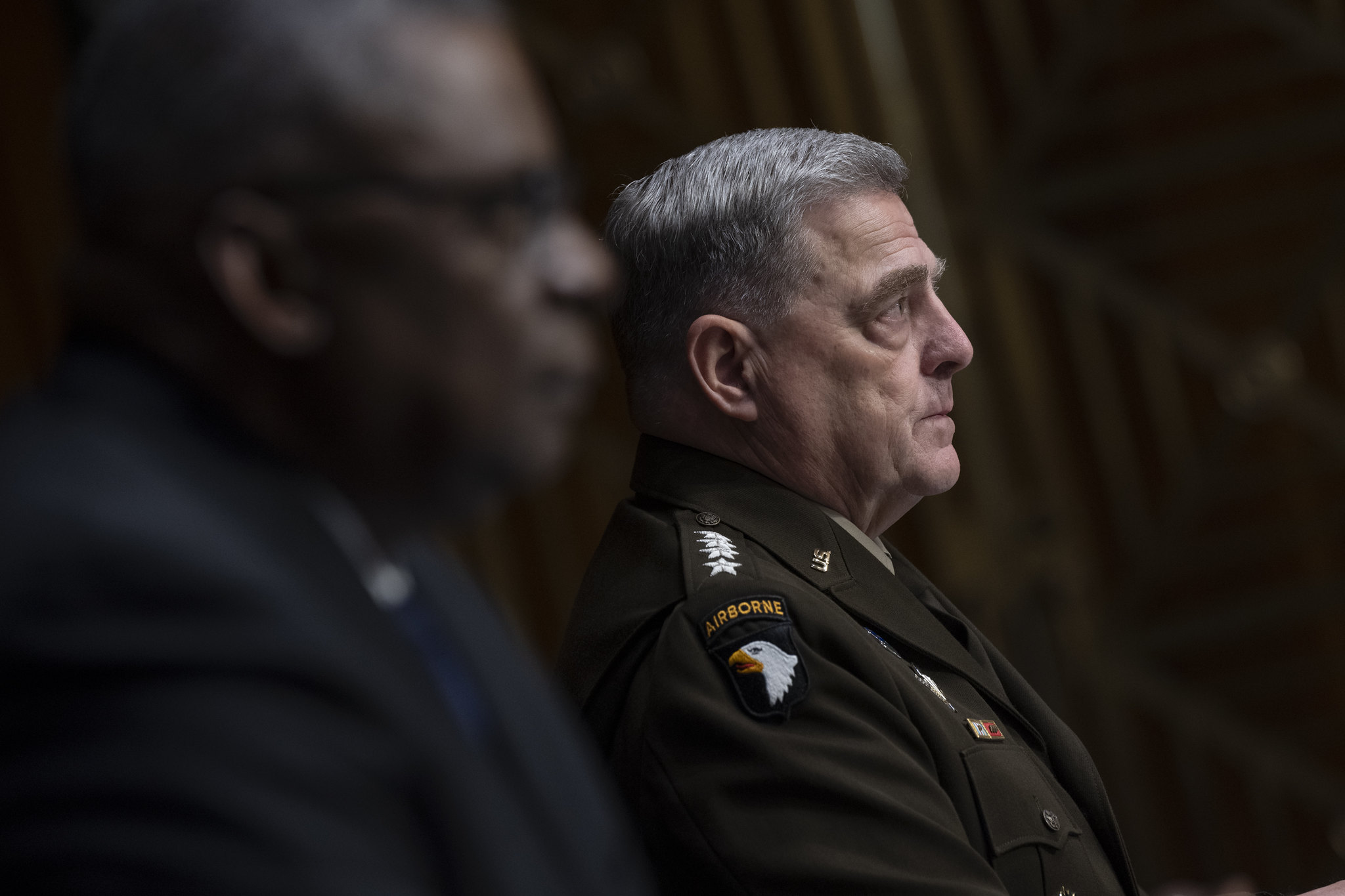 Secretary of Defense Lloyd J. Austin III and Army Gen. Mark A. Milley, chairman of the Joint Chiefs of Staff, testify to the Senate Appropriations Committee regarding the fiscal year 2022 budget for the Defense Department, June 17, 2021. DoD Photo

China wants the ability to invade and hold Taiwan within the next six years but might not intend to do so in the near term, Chairman of the Joint Chiefs of Staff Gen. Mark Milley told Congress today.
Milley said congressional testimony earlier this year from former U.S. Indo-Pacific Command commander Adm. Phil Davidson and current INDOPACOM commander Adm. John Aquilino that China was preparing to take Taiwan within the next six years was based on comments Chinese leader Xi Jinping made to the People’s Liberation Army.

“Their assessment is based off a speech by President Xi that challenged the People’s Liberation Army to accelerate their modernization programs to develop capabilities to seize Taiwan and move it from 2035 to 2027… If Adm Aquilino and Adm. Davidson said that China had an intent, has made a decision, and they intend to invade and seize Taiwan then I do disagree with that. I see no evidence of that actual intent or decision-making. What I’m talking about is capability,” he said in response to Rep. Elaine Luria (D-Va.) during the hearing.
“It’s a capability, not an intent to attack or seize. My assessment is an operational assessment. Do they have the intent to attack or seize in the near-term defined as the next year or two. My assessment of what I’ve seen right now is no, but that could always change. Intent is something that could change quickly. “

The difficulty of an invasion of Taiwan is still a major barrier for the PLA.

“I don’t see it happening right out of the blue. There’s no reason for it and the cost to China far exceeds the benefit and President Xi and his military would do the calculation and they know that an invasion – in order to seize an island that big, with that many people and the defensive capabilities the Taiwanese have, would be extraordinarily complicated and costly. At this point in time – next 12 to 24 months – I’m not seeing any indicators warnings yet,” he said.

In March, Davidson told the Senate the threat of an invasion of Taiwan had accelerated.

Later that month, Aquilino told the Senate during his confirmation hearing for INDOPACOM that defense of Taiwan was the largest military problem in the region.

“The most dangerous concern is that of a military force against Taiwan. To combat that, the forward posture west of the international dateline is how Adm. Davidson describes it – and I concur with that – forces positioned to be able to respond quickly, and not just our forces,” Aquilino told the Senate Armed Services Committee.
“This problem is much closer to us than most think.”

“The budget does not convey that sense of urgency when we’re seeing a shrinking fleet rather than a growing fleet to counter China and the threats in the Pacific,” she said.