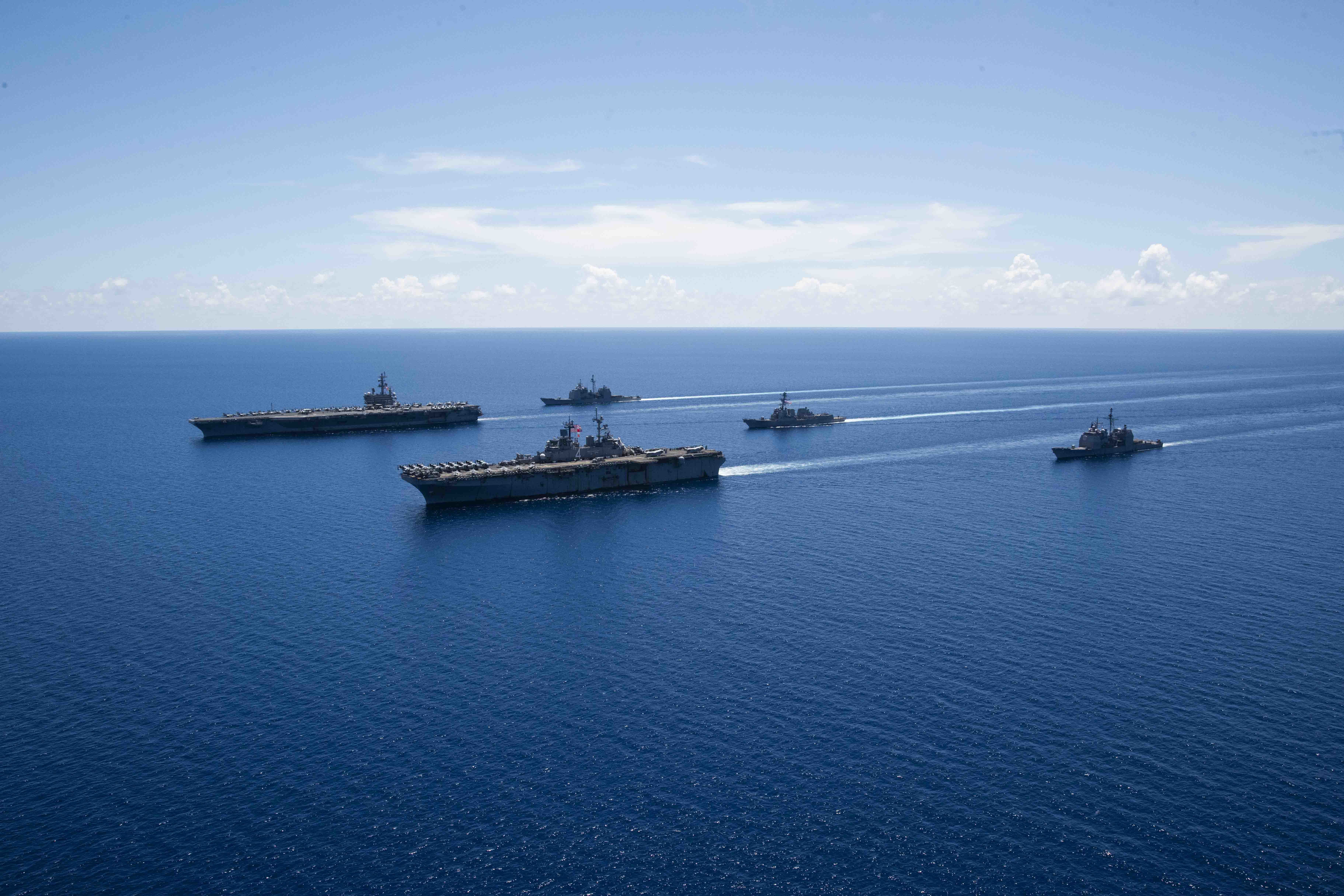 Ships from Ronald Reagan Carrier Strike Group and Boxer Amphibious Ready Group sail in formation while conducting security and stability operations in the U.S. 7th Fleet area of operations in 2019. US Navy Photo.

In an executive summary of the combatant command’s investment priorities, reviewed by USNI News, INDOPACOM laid out a series of requests it argues it needs to counter China in the region.

“The PDI is structured to enhance budget transparency and oversight while focusing resources on vital military capabilities to deter China,” the document reads.

“The requirements outlined in this report are specifically designed to persuade potential adversaries that any preemptive military action will be too costly and likely to fail by projecting credible, combat power at the time of crisis,” it continues. “This includes providing several flexible deterrent options including full OPLAN execution if deterrence should fail.”

In addition to $4.68 billion in Fiscal Year 2022, INDOPACOM wants $22.69 billion from FY 2023 through FY 2027 to meet its objectives, according to the document, which mirrors INDOPACOM’s request from last year.

The document to Congress lists five subject areas that INDOPACOM is concentrating on: Force Design and Posture; Exercises, Experimentation, and Innovation; Joint Force Lethality; Logistics and Security Enablers; and Strengthen Allies and Partners.

“The focus areas outlined in PDI are challenges that require immediate and joint solutions not accounted for through Service investments— specifically, the fielding of an Integrated Joint Force with precision-strike networks west of the International Date Line along the First Island Chain, integrated air missile defense in the Second Island Chain, and a distributed force posture that provides the ability to preserve stability, and if needed, dispense and sustain combat operations for extended periods,” the document reads. 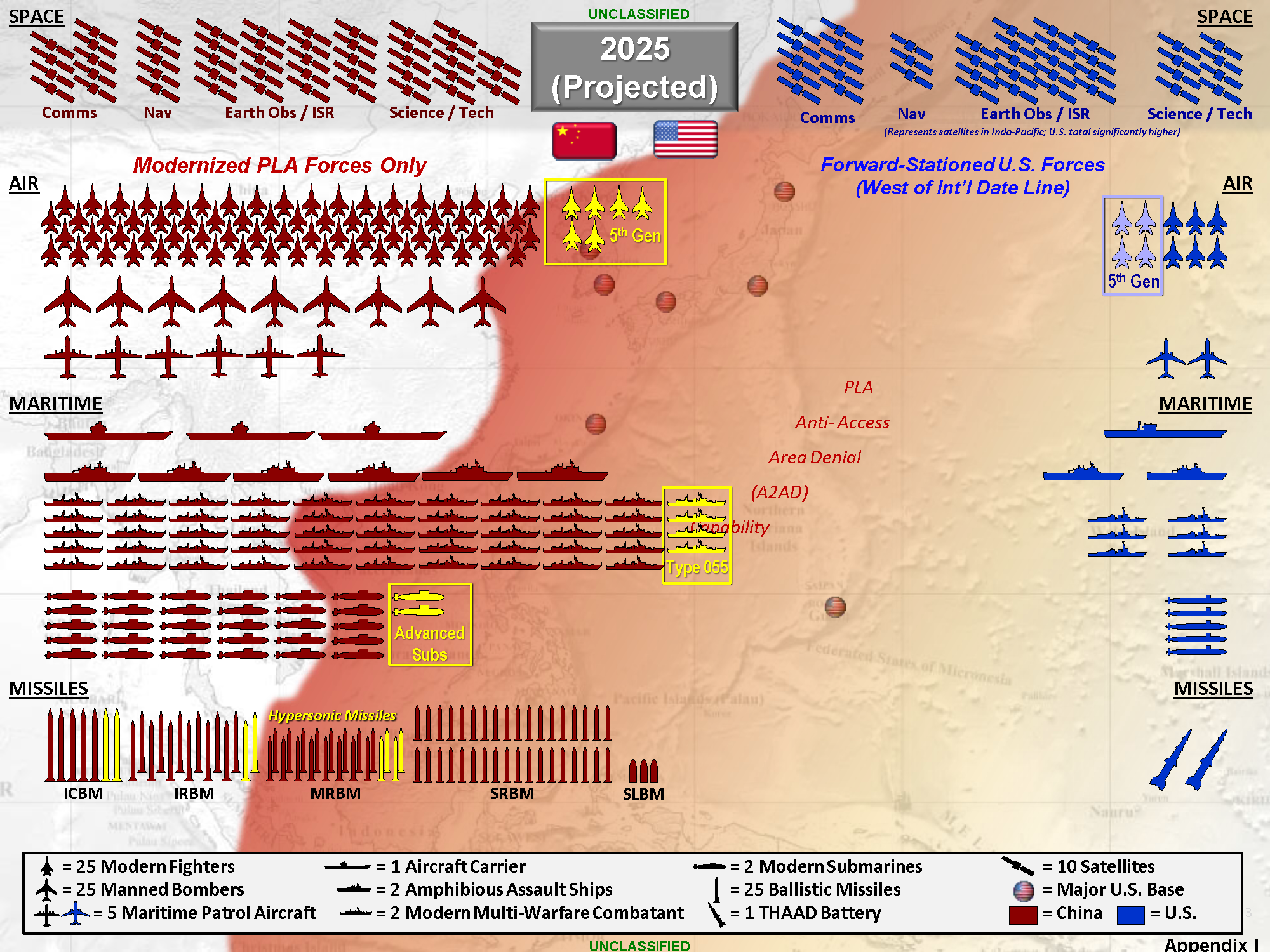 INDOPACOM estimate of 2025 Chinese forces in the Western Pacific Image

The combatant command reiterated its call for a homeland missile defense system for Guam, which appeared in last year’s INDOPACOM investment goals.

“Highly survivable, precision-strike fires can support the air and maritime maneuver from distances greater than 500 km,” the summary reads.

“A constellation of space-based radars with rapid revisit rates to maintain situational awareness of adversary activities and provide low latency target custody and ground and air moving target indicators and represents a persistent queuing source for [Tactical Multi-Mission Over-the-Horizon Radar] and [Guam Defense System],” according to the summary.

Under the force posture category, INDOPACOM is asking for $1.63 billion in the upcoming fiscal year for “Power Projection, Dispersal, and Training Facilities,” in the United States, compact states and U.S. territories. The item would need $4.67 billion from FY 2023 through FY 2027.

“Forward-based, joint rotational forces are the most credible way to demonstrate U.S. commitment and resolve to potential adversaries while simultaneously assuring allies and partners. This requires a force posture and joint force laydown properly distributed west of the International Date Line (IDL), possessing the capabilities and authorities to respond to contingencies while balancing lethality and survivability,” the document reads.

“This effort begins with completing the Defense Posture Realignment Initiative (DPRI), the current program of record enables sustainment operations and provides the necessary lift for Marine forces scheduled to relocate from Okinawa to Guam,” it continues. “This initiative is partially funded by the government of Japan. Additionally, the U.S. and our allies must develop locations that provide expeditionary airfields for dispersal and ports for distributed fleet operations. Ground forces armed with long-range weapons in the First Island Chain allow USINDOPACOM to create temporary windows of localized air and maritime superiority, enabling maneuver. Additionally, amphibious forces create and exploit temporal and geographic uncertainty to impose costs and conduct forcible entry operations.”

“PDI provides a pragmatic and economically viable approach for implementing a deterrence strategy for defending U.S. interests in the Indo-Pacific while mitigating risk and avoiding escalation,” the document reads. “Funding levels for the Pacific Deterrence Initiative (PDI) in FY22 ($4.6B) is less than seven-tenths of 1% of the Department of Defense’s Total Obligating Authority in FY21, and two-thirds the amount spent on the European Defense Initiative in FY20 ($5.9B).”

The priorities list, dated Feb. 27, comes as the Pentagon under the new Biden administration performs a “budget relook” of the Trump administration’s proposal for FY 2022.