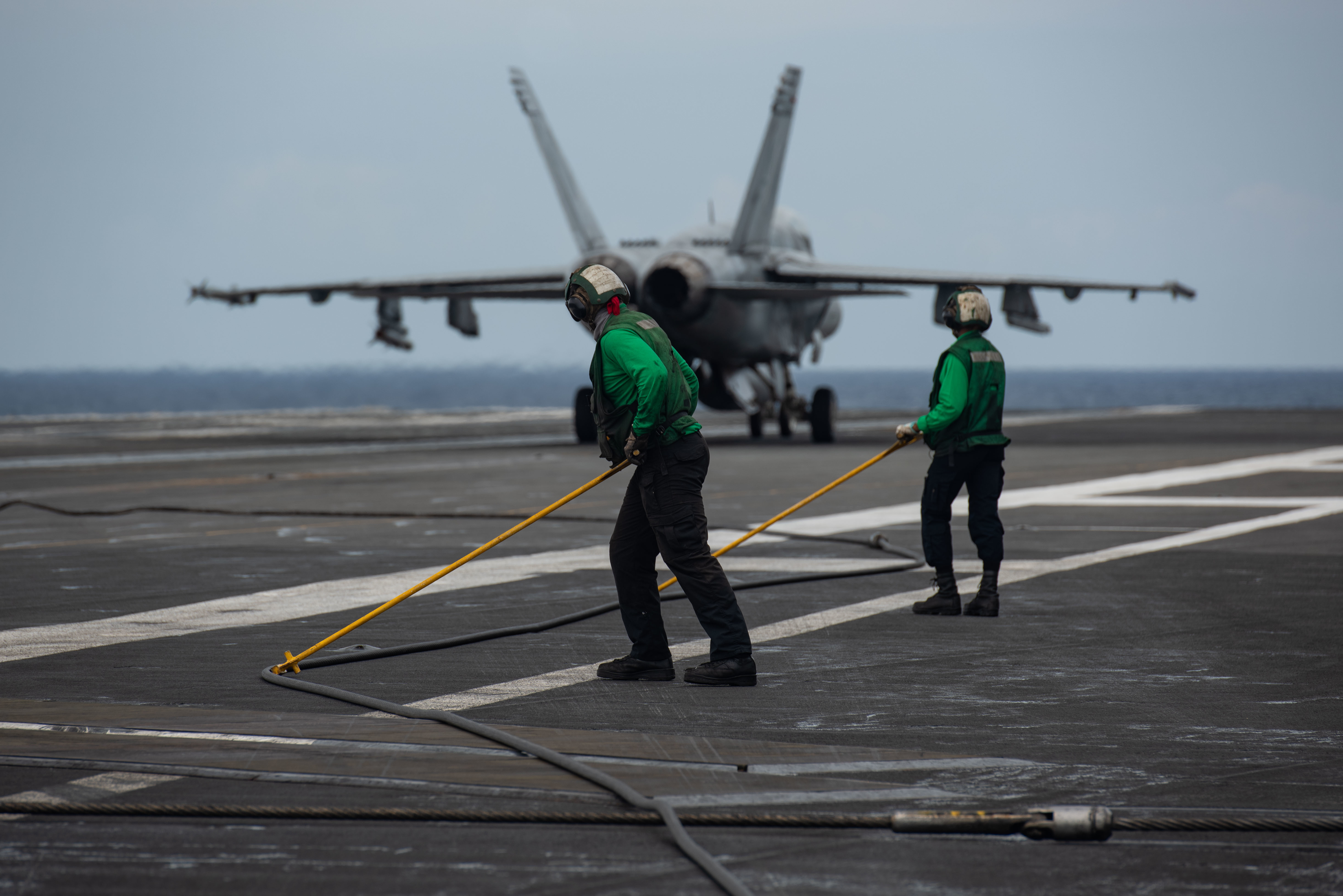 Sailors push back an arresting gear wire after an F/A-18E Super Hornet attached to the Dambusters of Strike Fighter Squadron (VFA) 195 lands on the flight deck of the U.S. Navy’s only forward-deployed aircraft carrier USS Ronald Reagan (CVN 76). US Navy Photo

The Ronald Reagan Carrier Strike Group is in the Indian Ocean as it heads to the Middle East to help provide support for the U.S. withdrawal from Afghanistan.

USS Ronald Reagan (CVN-76), Carrier Air Wing 5 and its escorts are moving through the Indian Ocean after drilling with Singapore’s Navy last week in the South China Sea, according to the June 21 USNI News Fleet Tracker.

Reagan, the Navy’s forward-deployed carrier based in Yokosuka, Japan, will make a rare patrol in U.S. Central Command to support the U.S. military as it winds down the two-decade war in Afghanistan. Reagan will relieve USS Dwight D. Eisenhower (CVN-69), which has been operating in the Middle East since April and is on its second deployment within a year.

Meanwhile, the Carl Vinson Carrier Strike Group has been drilling near Hawaii ahead of its upcoming deployment. The CSG is expected to deploy to the Indo-Pacific region later this summer to fill the void left by Reagan heading to the Middle East, USNI News understands.

Asked if the CSG’s training near Hawaii, as opposed to off the coast of California, is meant to demonstrate U.S. presence in the Indo-Pacific region, Pentagon spokesman John Kirby emphasized the Pentagon’s focus on the theater.

“I would caution you from thinking that there’s some sort of specific message here other than, I mean, obviously we are focused on the Indo-Pacific. And you’ve heard the secretary talk about this quite a bit,” Kirby said today during a Pentagon press briefing. “So it shouldn’t come as a surprise to anybody that we would be training and taking advantage of training opportunities throughout the region.”

The upcoming deployment comes amid an increasingly strained relationship between the U.S. and China, which American officials repeatedly characterize as the military’s “pacing threat.”

The carrier movements also show the strain on the Navy’s carrier force, which has had to execute two double-pump deployments in the last year to keep up with combatant commander demands. Both Eisenhower and USS Theodore Roosevelt (CVN-71) recently had to deploy twice within a year’s timeframe.

Sen. Jim Inhofe (R-Okla.), the ranking member of the Senate Armed Services Committee, voiced concern about the carrier force on Monday as he criticized the Navy’s recent budget request for shipbuilding.

“We don’t have time to waste. The redeployment of the Reagan from the Indo-Pacific to CENTCOM is the most recent example of how we don’t have sufficient carriers & we are asking the @USNavy to do too much with too little. @POTUS‘s paltry shipbuilding budget will only make it worse,” Inhofe wrote on Twitter.

We don’t have time to waste. The redeployment of the Reagan from the Indo-Pacific to CENTCOM is the most recent example of how we don’t have sufficient carriers & we are asking the @USNavy to do too much with too little. @POTUS's paltry shipbuilding budget will only make it worse