The following is the May 19, 2021 Department of Defense Inspector General investigation, Evaluation of the Readiness of the U.S. Navy’s P-8A Poseidon Aircraft to Meet the U.S. European Command’s Anti-Submarine Warfare Requirements.

The objective of this evaluation was to determine whether the readiness of the U.S. Navy’s P-8A Poseidon fleet met the anti-submarine warfare (ASW) requirements of the U.S. European Command (USEUCOM).

The P-8A Poseidon is a multi-mission maritime aircraft. It is primarily used by Theater Commanders to conduct ASW operations to deny the enemy the effective use of its submarines against the U.S. and its allies. The Navy began developing and acquiring the P-8A Poseidon in April 2000 to replace its P-3C Orion fleet, which entered Navy service in 1962. In FY 2019, the estimated total acquisition cost for the Navy’s P 8A Poseidon fleet was $35 billion, and the estimated total operation and sustainment cost for the Navy’s P-8A Poseidon fleet was $55 billion. As of December 2019, the Navy planned for at least 117 P-8A Poseidon aircraft.

The P-8A Poseidon is a militarized variant of the Boeing 737 commercial aircraft, with system modifications to support the Navy maritime patrol mission requirements. The Navy developed the P-8A Poseidon to meet its need for rapid-response and long-range search capabilities. The Navy also needed an aircraft that could work independently or in conjunction with carrier strike groups and other joint and allied assets to ensure a maritime area free of surface and subsurface threats. 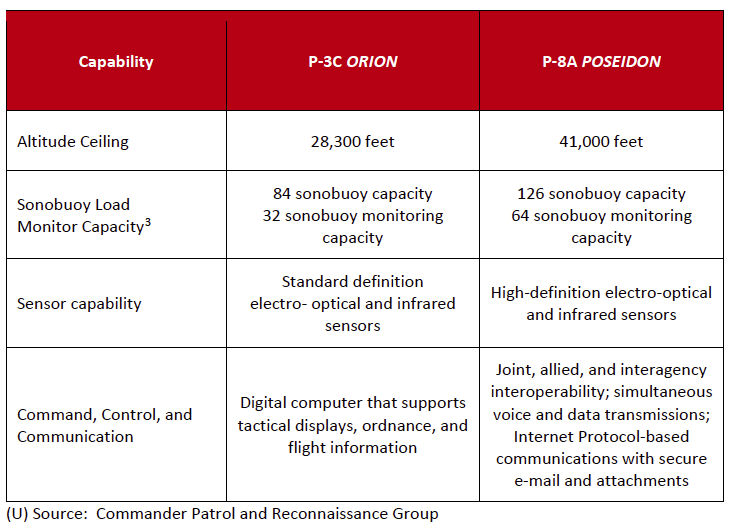 The Navy plans to complete the transition from the P-3C Orion to the P-8A Poseidon in FY 2022. The Navy will use a mix of P-8A and P-3C aircraft until it completes its transition to the P-8A. As of October 13, 2020, the Navy’s maritime patrol aircraft inventory included 9 P-3C Orion and 104 P 8A Poseidon aircraft assigned to Maritime Patrol Reconnaissance Aircraft (MPRA) patrol squadrons.

[REDACTED] The officer-in-charge of the Sigonella Aviation Support Division (ASD) stated that Naval Air Station (NAS) Sigonella is the primary deployment site for P-8A Poseidon aircraft in the USEUCOM AOR.