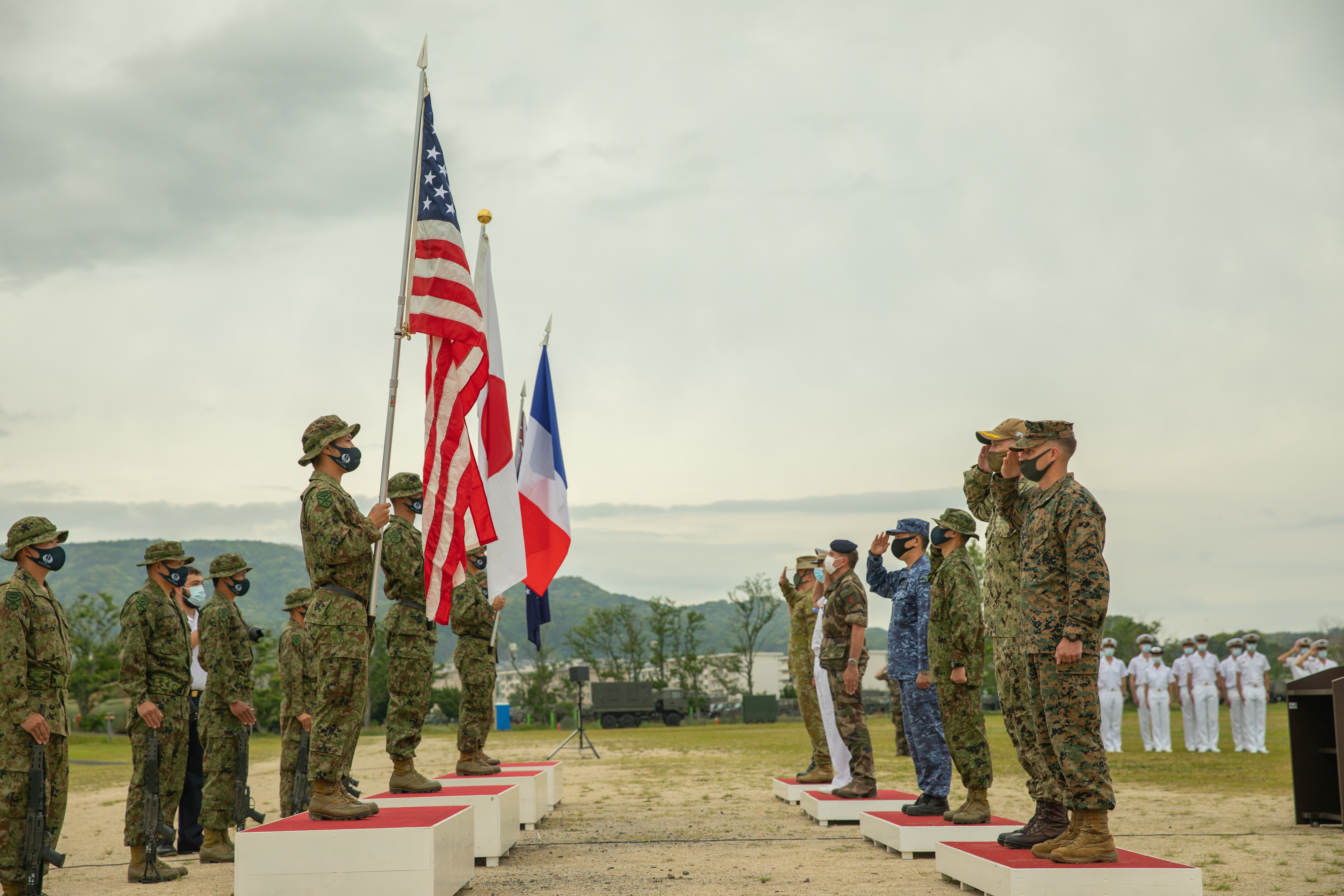 American, Japanese, French and Australian commanders salute their respective flags during the opening ceremony for exercise Jeanne D’Arc 21, in Camp Ainoura, Sasebo, Japan, May 11th, 2021. ARC-21 is an opportunity for US, French, Japanese, and Australian forces to share experiences, tactics, and best practices to sharpen their skills together. US Marine Corps Photo

The United States, Japan, France and Australia began their joint training exercise Jeanne D’Arc 21 in the Indo-Pacific region this week.

The ARC-21 exercise, which will take place throughout Japan from May 11 through 16, includes an initial phase of planning between the French, Japanese and U.S. personnel at Camp Ainoura, Naval Base Sasebo, in preparation for a field training exercise.

A Defense Department news release states that a field training exercise at the Kirishima Maneuver area in Kyushu would include activities such as an exchange of subject matter expertise between combat engineers, casualty evacuation drills and combat service support training. U.S. and Japanese forces would also carry out simulated fire support coordination and establish a forward arming and refueling point (FARP) for U.S. and Japanese aircraft. Forces from all four countries will conduct a multilateral ship-to-shore amphibious assault to close out the exercise.

ARC-21 will strengthen the defense cooperation between the four countries toward the realization of a “free and open Indo-Pacific,” according to a Japan Maritime Self-Defense Force news release. The goal of the exercise is for the navies to improve tactical skills for island defense.

The JMSDF release did not mention the French troops involved, but Tonnerre departed France in February with an embarked mix of French Army troops, including 155 soldiers from the 6th Light Armored Brigade, a command company of the 2nd Foreign Infantry Regiment, a section from the 13th Demi-Brigade of the Foreign Legion, an armored platoon from 1st Regiment Saphis, two combat engineer sections, an anti-air section and a Joint Tactical Air Control team.

A U.S. 7th Fleet news release stated that, during the at-sea phase, ships from each nation will plan and prepare amphibious landings and air assaults while also conducting formation maneuvers, air defense exercises and communication drills with other ships participating in the exercise.

“On the New Orleans we are prepared to flex our amphibious skills with each of the teams here and strengthen our joint operational capabilities,” Capt. Brian Schrum, New Orleans’ commanding officer, said in the release.
“Each event affords us the opportunity to collaborate across staffs developing deeper personal bonds, fostering trust between all our nations and in turn growing as a cohesive naval and Marine force.”

U.S. ground forces taking part in the exercise are from the Japan-based III Marine Expeditionary Force, though few details have been released as to the exact units and numbers of personnel and assets involved in the exercise.

“This exercise, by bringing together our air, land, and maritime forces to increase our ability to jointly respond to crises across the range of military operations, is yet another demonstration of our rapidly growing constellation of partners, all united by the common goal of a free and open Indo-Pacific,” Lt. Col. Jeremy Nelson, commanding officer of 3d Landing Support Battalion, 3d Marine Logistics Group, said in the DoD release.
“It is commonly said that we train alongside our partners and allies in peace to be ready to fight alongside them in war, and exercises like ARC-21 are the best example of this.”