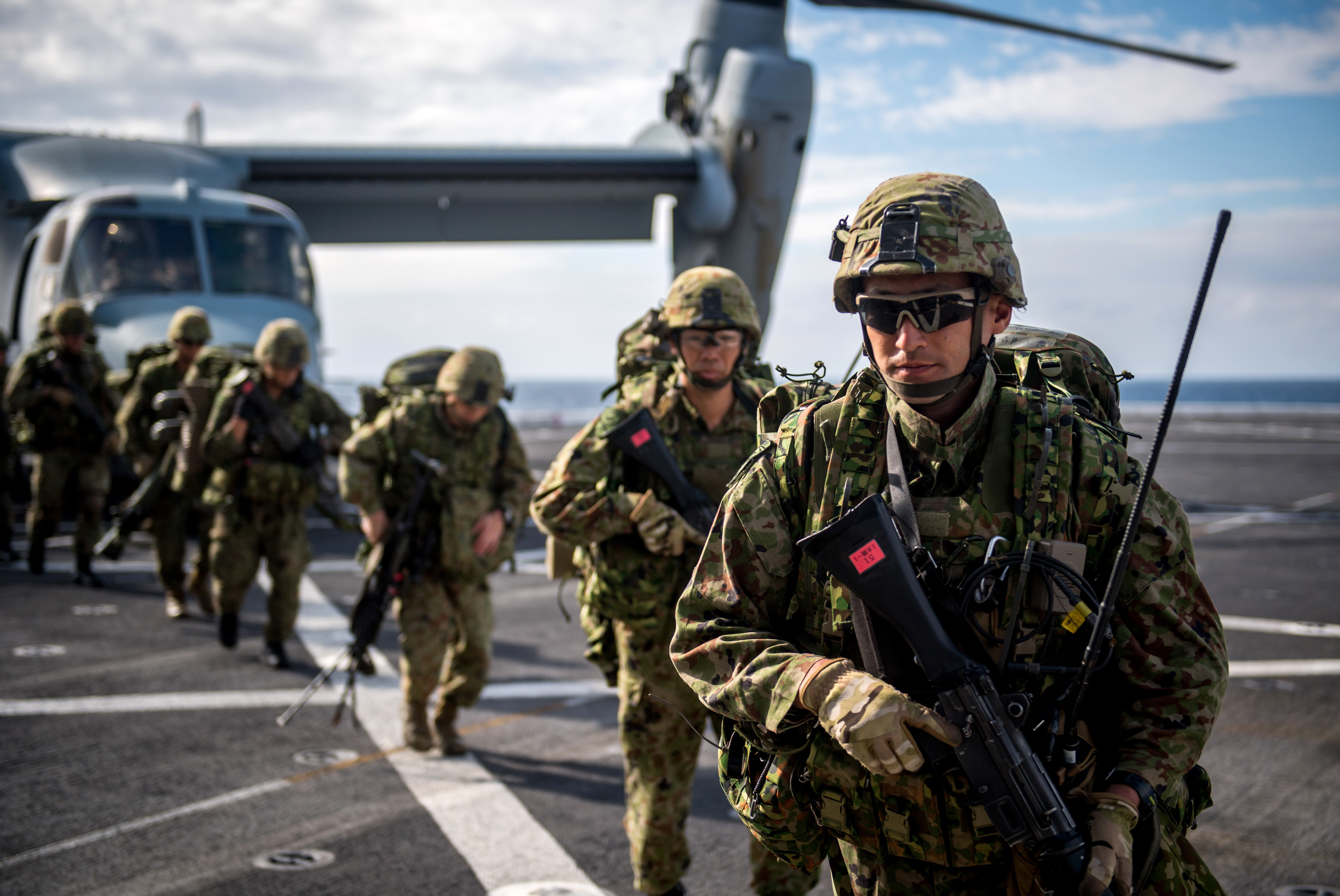 The green camouflaged-painted AAVs of Japan’s Amphibious Rapid Deployment Brigade (ARDB) had left the well deck of USS Somerset (LPD-25) a few miles off the coast, carrying soldiers ashore in Monday’s final amphibious landing of the bilateral training exercise “Iron Fist.” An hour later, the first of two Navy air-cushioned landing craft delivered trucks and other equipment from the ship to support the force ashore.

Iron Fist 2019 marks the first time Japan brought its own AAV-P7/A1s for the training, along with 550 soldiers and equipment, all organized as a regimental landing team with the Amphibious Rapid Deployment Brigade’s first operational unit, the 1st Regiment.

Until this year, JGSDF soldiers who trained at Camp Pendleton used Marine Corps-supplied amtracs. This time, however, the 10 tracked AAVs brought here are part of the growing inventory as Japan builds its amphibious brigade and trains its force to operate with the vehicles on land, at sea and with other military forces – notably the Marine Corps and Navy. In October, for example, Japan soldiers trained with their own AAVs alongside Marines aboard dock landing ship USS Ashland (LSD-48) and with Philippine troops during the, U.S.-Filipino exercise called “Kamandag” in the Philippine Sea. 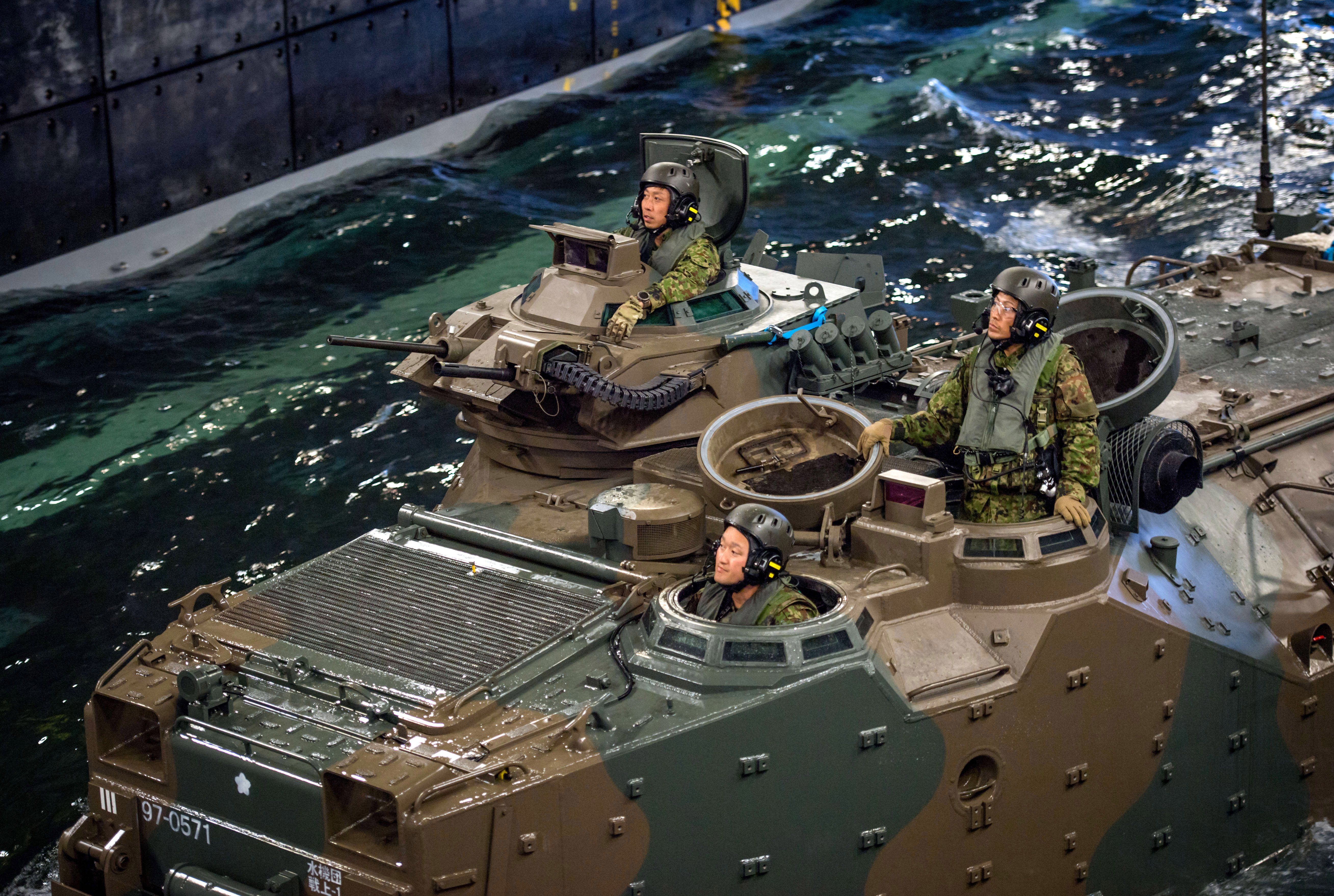 The ARDB, planned as a 2,100-member brigade under Japan’s Western Army Infantry Regiment, and JGSDF’s Ground Component Command were officially established on March 27, 2018, as part of Japan’s broader strengthening and restructuring of its defense forces.

“The duty of the brigade is to conduct amphibious tactics for quick landing, recapturing, and securing the islands in case of illegal occupation,” according to the Japan Ministry of Defence’s website. “The Brigade will further strengthen its amphibious tactical functions by conducting continual training for equipment including the newly introduced AAV7 and the V-22 Osprey.”

Looming in the background are what military officials and analysts see as growing security threats in China and Russia, which are extending their influence and military reach across the region. Both nations have challenged Japan over control of nearby remote islands.

The ARDB is slated to have three regiments under its wing when it is fully established, Lt. Gen. Hirokazu Fujita, chief of staff of the Ground Component Command, told journalists during a press conference here on Monday. 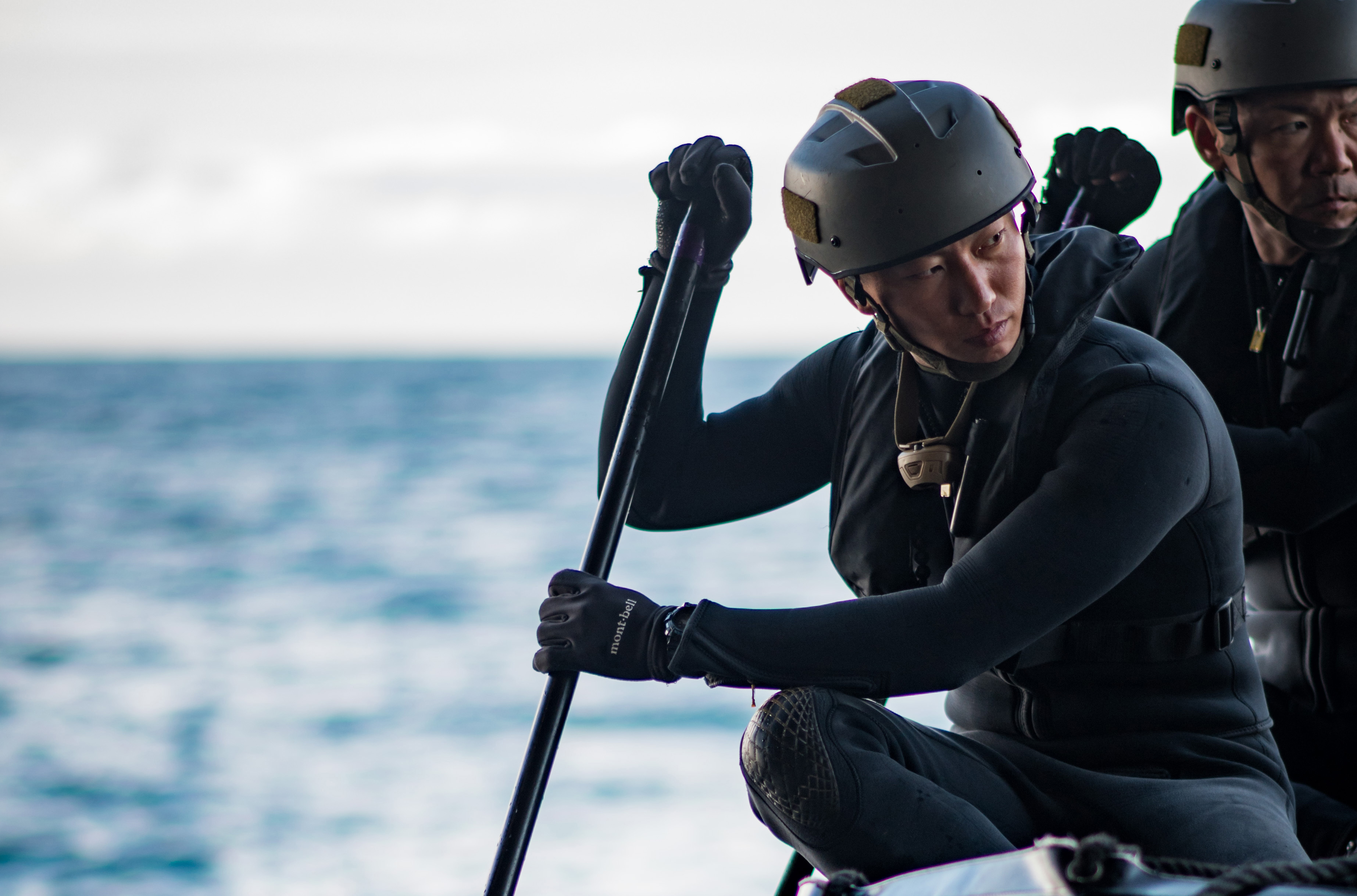 “We look forward to the continued development so we can work even further with the ARDB as they develop these additional regiments,” added Lt. Gen. Joseph Osterman, who commands I Marine Expeditionary Force.

The Camp Pendleton-based I MEF is hosting the Japanese forces during the five-week Iron Fist, a series of training exercises that included AAV operations, medical training, staff planning exercises, and combined-arms fire and maneuver, mortar and call-for-fire drills. Soldiers also rappelled from Marine Corps MV-22 Osprey tiltrotors, an aircraft that Japan is purchasing to support its nascent amphibious forces.

Fujita, who supervised the ARDB during the exercise, credited the access to the Marines’ training ranges and facilities with helping improve the ARDB’s “tactics, combat capability and mutual cooperation with the U.S. forces to conduct amphibious operations to defend remote islands.” 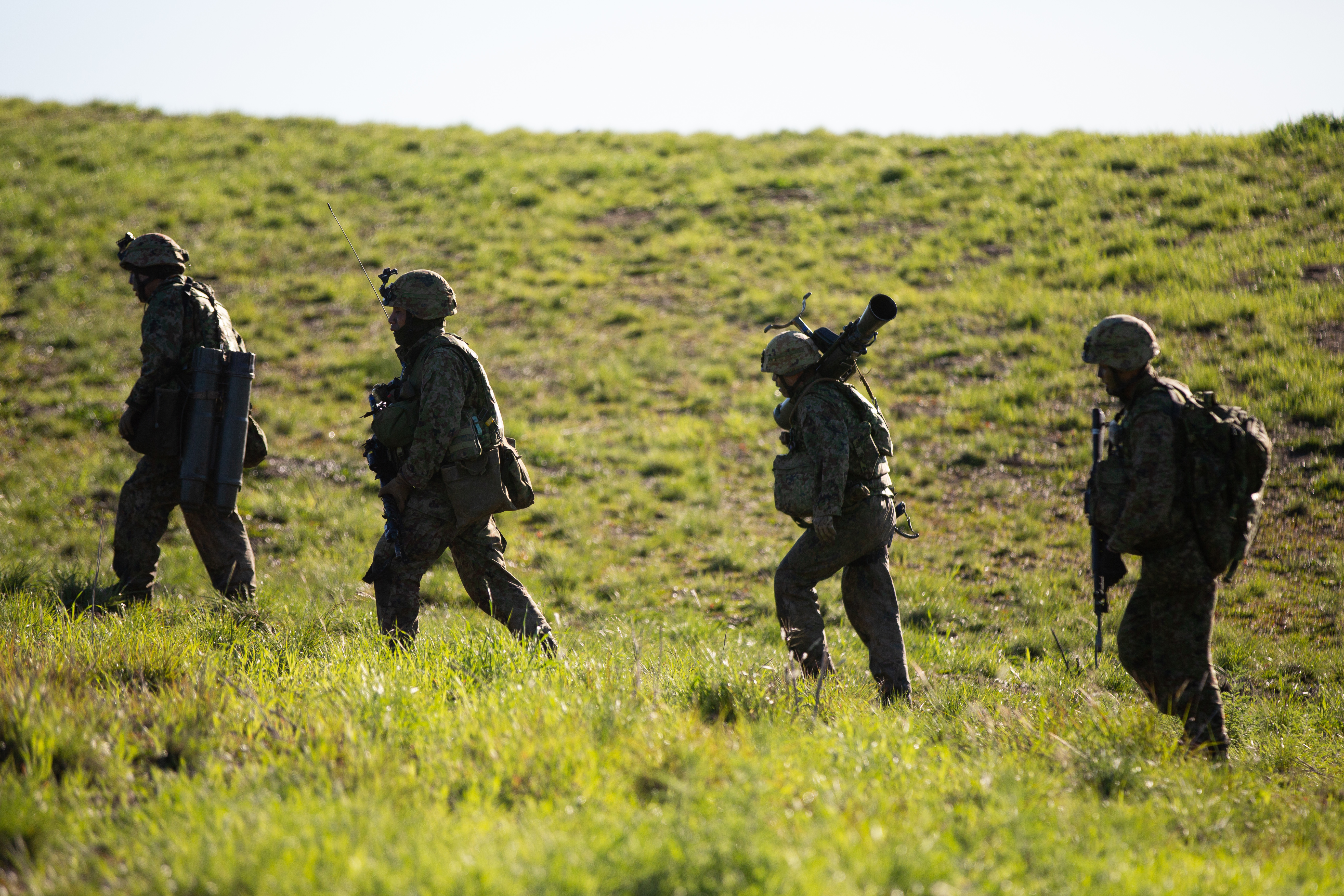 “The security environment surrounding Japan has become increasingly severe, with various [challenges]… that are becoming more untenable and acute, such as security challenges to internal order,” Fujita said during the press conference, held before the final beach landing.
“We view military provocation activities as international terror activities. Due to these challenging security environments, the JGSDF has undergone its greatest reform since its inception to protect people’s lives, security and peace from various threats.”

The ARDB “is the spearhead and is ready to defend remote islands and respond to any kind of contingency,” he said. “The ARDB has improved its necessary amphibious capabilities, knowledge and skill sets.” He added that “amphibious capabilities are essential for the JGSDF to grow” and noted the training “is essential… to be ready for tomorrow.”

Iron Fist, conducted across Camp Pendleton’s large range complex and at sea aboard Somerset, brought together Japan and U.S. planning and operational staffs, medical teams and small-unit ground forces for realistic training scenarios. With regular rotations of JGSDF personnel, some soldiers this year trained at the live-fire ranges for the first time.

“So part of it is working at the tactical level, where the junior Marines and the soldiers work together and develop their basic individual skills,” Osterman said.

“Probably most important” this year, he said, was the presence of Japan’s own AAVs, which required Somerset to host and support a mix of U.S. and Japan vehicles and personnel. “So being able to be interoperable and making things fit in our landing craft… with the Japanese vehicles being different than ours” added to the challenge to ensure “the interoperability of the tactics and the landing allows them to conduct, literally, a combined operation.” 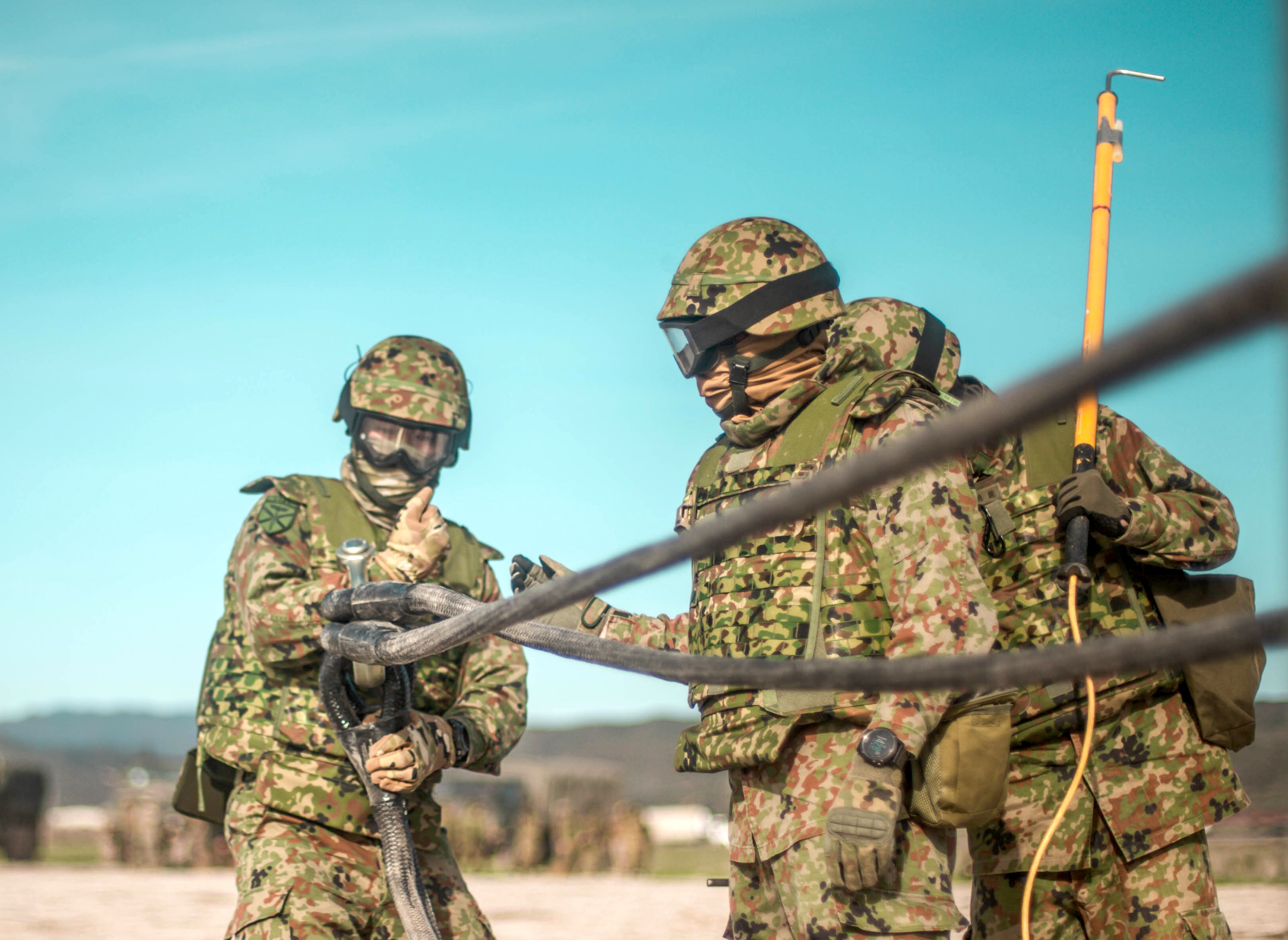 “This is particularly important because the most difficult operations that you can conduct are amphibious operations,” he said. “So to then do it in a multinational aspect, with each country’s own assets and doctrine, being able to fuse that all together is, frankly, just an amazing thing to see. That objective has been reached with this exercise. It really has brought it to a pinnacle in really our ability to work together.”

The Marine Corps has been at Japan’s side throughout the process of building the ARDB, including through bilateral exercises and collaboration to establish a credible amphibious force that can operate on land and at sea.

“I can’t emphasize enough how important this training has been for both of our nations,” Osterman said. “It has sharpened our amphibious capabilities to quickly employ sea-based assets in a multinational environment. This is very important because, globally, naval expeditionary forces provide an important stabilizing capability to these unpredictable threats.” 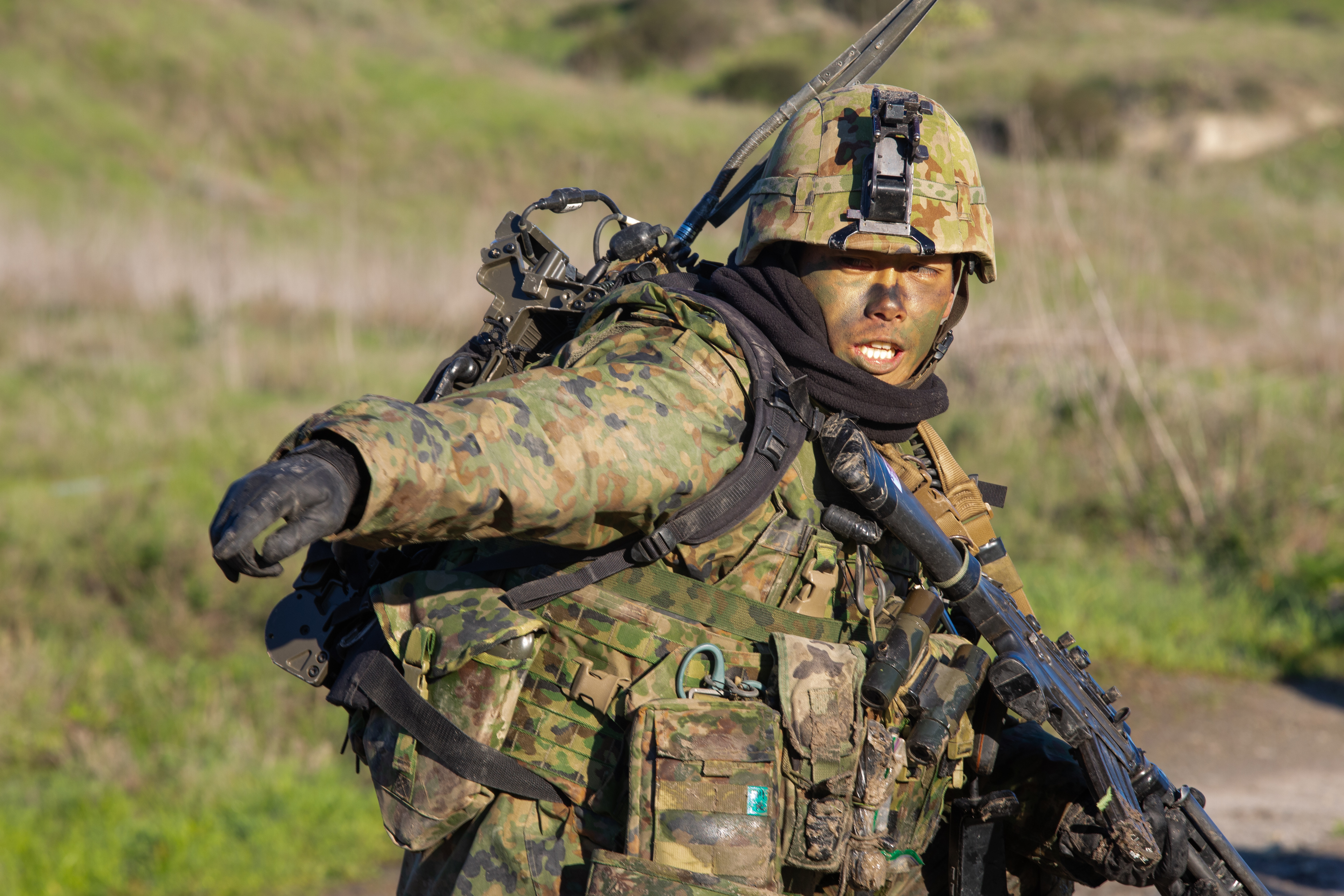 Forward-deployed Marines and the ARDB, he said, represent the “insurance policy against the threat disruptions of the global security environment. We are committed to working with our allies and partners to maintain a peaceful, prosperous and free and open Indo-Pacific region.”

Such forces “help ensure stability and prosperity around the world, and it is multilateral exercises like Iron Fist that help us to operate together in the maritime environment,” Osterman said. The U.S.-Japan alliance stemming from a nearly 70-year-old security treaty has been “a cornerstone of peace and security in the Indo-Pacific region.”

That relationship, he said, “helps all of us to conduct operations such as counter-terrorism, counter-piracy, peacekeeping, capability building, ballistic missile defense, and humanitarian assistance and disaster relief operations.”