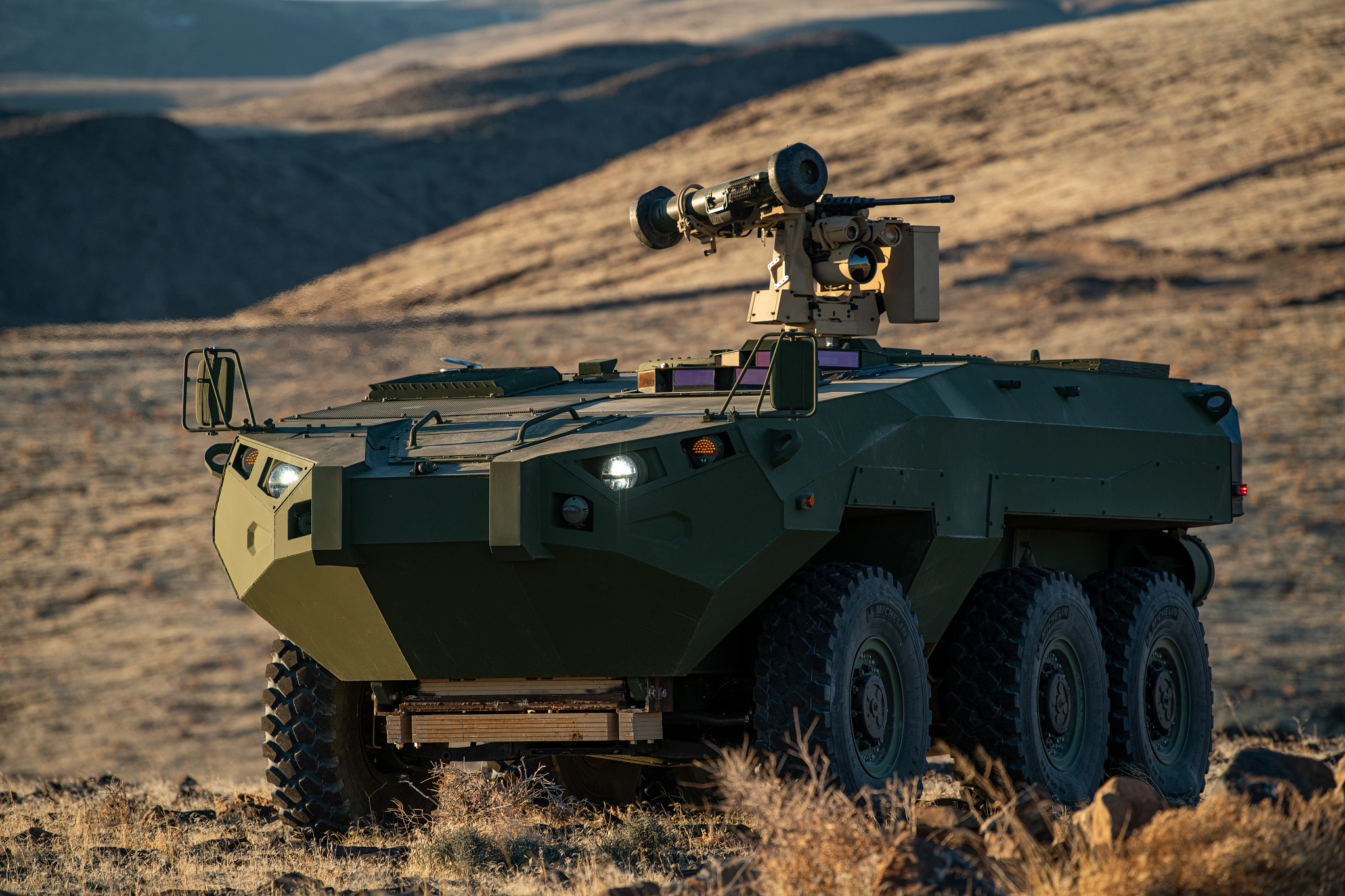 The Marine Corps has collected proposals to design and build a prototype Advanced Reconnaissance Vehicle, meant to far surpass the capabilities of the legacy Light Armored Vehicle and help reconnaissance Marines observe their surroundings, find targets and even take out threats on their own.

After issuing a draft proposal last summer, the Marine Corps asked for prototype proposals on March 30 and wrapped up the solicitation period yesterday for an ARV prototype tailored to a Command, Control, Communications and Computers / Unmanned Aircraft Systems (C4/UAS) variant that’s in line with the service’s Force Design 2030 efforts, according to information posted through the National Advanced Mobility Consortium. The request for proposals was sent through the consortium and available only to members, according to a Marine Corps preview of the effort.

Textron, which pitched its Cottonmouth vehicle design for the ARV prototype competition, told reporters that the Marine Corps is looking to replace its more than 600 LAV-25 vehicles with as many as 500 ARVs. David Phillips, Textron’s senior vice president of land systems, told reporters in a call that the Marines would select up to three bidders to design and build a prototype vehicle to go through testing. The next phase – an engineering and manufacturing development (EMD) effort involving up to two competitors – could take place in the Fiscal Year 2024 timeframe, he said.

Textron-ARV-Unveil-V16-Branding-v03.mp4 from Textron Systems on Vimeo.

Phillips said Textron started developing a prototype about a year ahead of the formal program based on signals it was getting from the Marine Corps.

“We see that as a next-generation scout vehicle requiring multi-domain [intelligence, surveillance and reconnaissance] capability. The things that they want: organic tethered UAS, unmanned aircraft system, with auto-launch and -retrieval. Again, they want an open architecture approach, that’s an imperative for them to allow easy integration of any payload capability, any payload capability that they want – but immediately, they want us to integrate mature technologies to include a whole bunch of United States government-furnished equipment that they’re providing for us to integrate into the system, things like battle management systems, communications suites, among others,” he explained.
“The system has to possess the size, weight and power to accommodate those systems and still stay within their vehicle cone index or their ground pressure. They want these systems to be under 18-and-a-half tons, and again, they want to fit four on a Ship-to-Shore Connector. The vehicle not only has to have outstanding land mobility, it has to swim in the ocean; it has to depart from connectors, and it has to transition through the surf zone.”

Textron took a clean-sheet design approach to developing Cottonmouth to ensure that it had the right combination of land and amphibious mobility and a fully open architecture design so that any sensors, software or weapons could be integrated into the vehicle, based on the Marines’ needs. Phillips said the company took a similar clean-sheet approach for the Army’s robotic combat vehicle competition to ensure the proposal was fully open and modular, and they’re now delivering four prototype vehicles after a short timeline – showing that the process could work for ARV, too, he said.

Phillips said Textron has built one prototype vehicle so far, which has run 748 miles of testing at the Nevada Automotive Test Center since February. The company would build a second vehicle for the Marines if selected for the prototyping effort, so it can keep one prototype to continue internal development in parallel to the Marines’ work.

Phillips said the Marines’ Force Design 2030 effort is questioning how they’ll fight and with what, and specifically to this mission, how the reconnaissance community will fit within larger formations and operations.

“They’re defining (reconnaissance) platoons here, sets of six very diverse vehicle sets, each with a unique mission – the first of which is what we’re developing in a prototype, what they’re calling the quarterback, the communications and control, the C4ISR sensor node, the quarterback of this future platoon construct. And there are five other variants in the future,” Phillips said, noting that the different variants would allow the platoon to sense, find targets and strike enemies all with the platoon’s own assets.
“The way we see it is, it’s a family of vehicles: a family of vehicles that will kind of all look alike in terms of commonality, which is great for any life cycle, it’s great for any logistics – but they’re going to have very diverse mission sets. And so that’s where the open architecture, that’s where being able to integrate different sensor suites into each of these platforms — whether it’s long-range precision fires, whether it’s active [electronic warfare], whether it’s counter-UAS, or whether it’s UAS and your basic reconnaissance and surveillance and intelligence-gathering. There are these different variants, and I think the combination of them form a team where you don’t need one-for-one (replacement for the LAVs), you become more effective with less vehicles.”

The first variant, the C4/UAS variant, would seat two vehicle operators and a mission crew of five, Phillips said. The Marine Corps will provide several types of radios, workstations and mission software, and a group 2 UAS to integrate into the vehicle, he added. 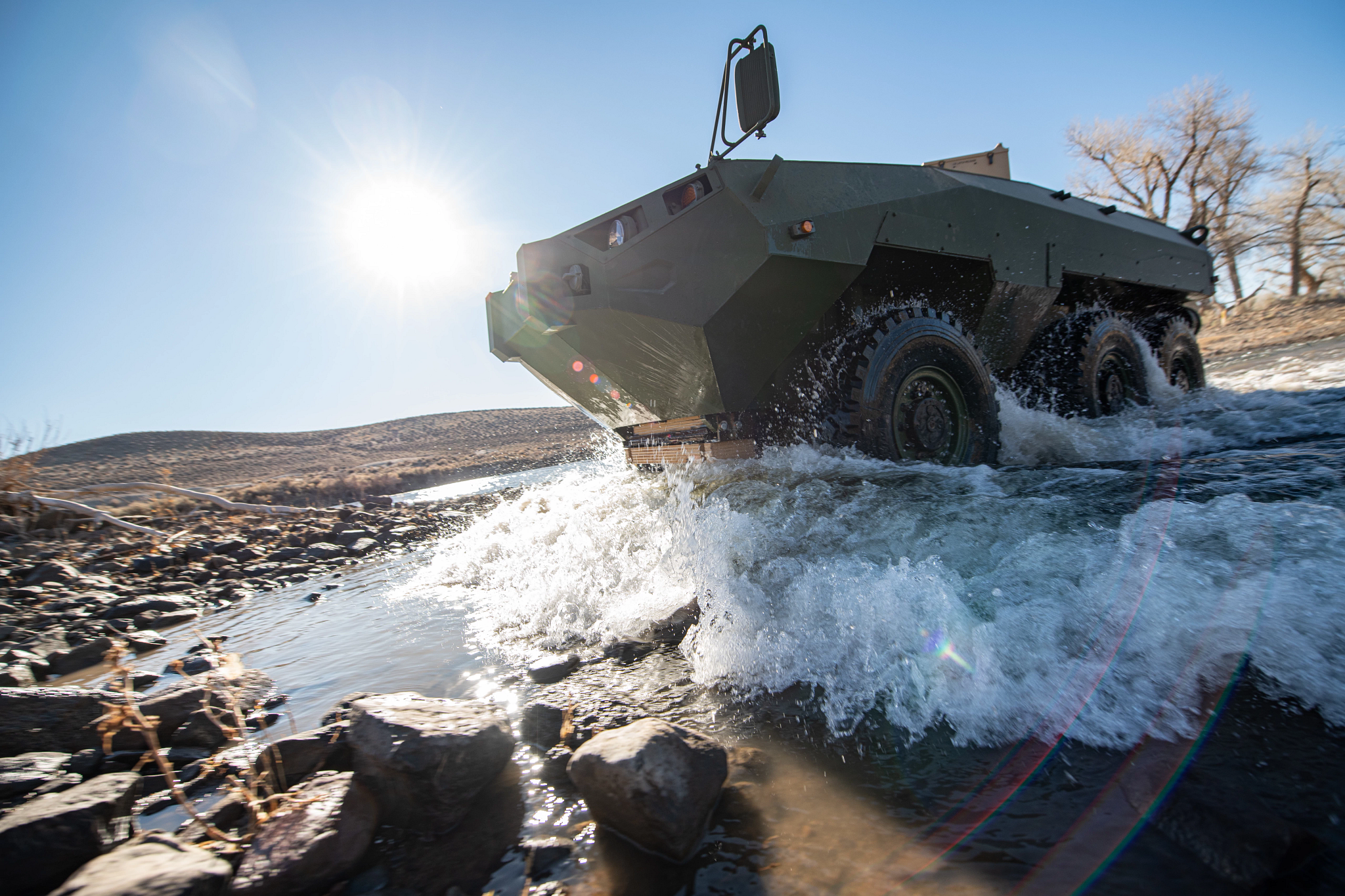 The Marine Corps has had a few starts and stops when it comes to finding an appropriate replacement for the LAV. Initial efforts failed to generate the right ideas for the next generation of warfare, USNI News reported in 2018, when the Marine Corps kicked off a new round of efforts focused on building a truck that could carry any number of emerging technologies such as unmanned and electronic warfare tools.

In 2019, the Marines conducted a Capability Based Assessment on armed reconnaissance that “pitted Light Armored Reconnaissance Battalions against a peer threat, and identified shortfalls and gaps in capability,” according to a 2020 Marine Corps Systems Command article. The results are outlined in the Initial Capabilities Document that was validated by the Joint Requirements Oversight Council in 2019.

“ARV must possess transformational capabilities to enable LAR Battalions to gain contact with and collect on peer-threat forces. It must accomplish this goal without becoming decisively engaged, while also successfully waging the counter-reconnaissance fight,” reads the article.
“After the analysis and various other supporting activities, the ARV concept emerged as a transformational required capability. The characteristics differentiating the ARV from current systems include a battle management system, enhanced vision technologies for increased situational awareness, and target tracking and engagement capabilities.”

Since that time, the Office of Naval Research awarded two contracts for ARV demonstrators that focused on very specific technologies, but this competitive prototyping effort that the Marines will soon award will be the first time industry can show off an integrated solution for the ARV program that has to balance both mobility in harsh environments and the ability to conduct a range of warfare missions in a complex threat environment.