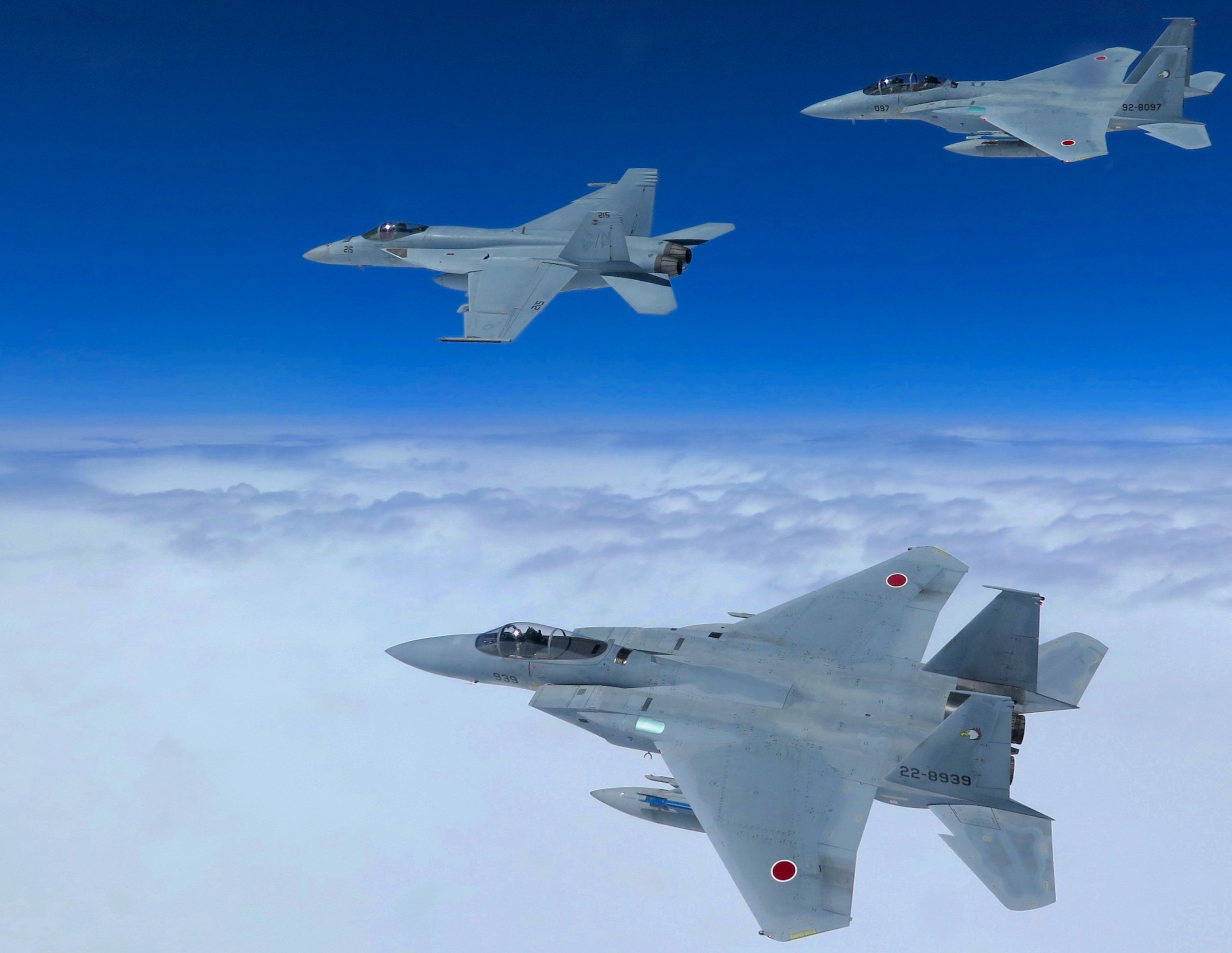 An F/A-18E (left) of the ‘Royal Maces’ of Strike Fighter Squadron (VFA) 27 flies in formation with two Japan Air Self-Defense Force F-15J Eagles during a dissimilar air combat training near Okinawa, Japan in 2015. US Navy Photo

Masafuma Iida, head of the America, Europe and Russia Division at the Japanese National Institute for Defense Studies, said the threat China poses now is a “very severe reality” that requires “Japan [to] acquire more offensive capability.” He called for the Japanese Air Self-Defense Force to have a long-range precision strike that could target Chinese coastal bases and ports as a deterrent to future aggression.

Speaking at an online forum of the Center for Strategic and International Studies, he added, “we need more deep-rooted cooperation with the United States.”

Iida suggested the cooperation starts with “a common objective [policy] to Chinese assertiveness.” Specifically, it would include more joint exercises covering all domains and shared intelligence, reconnaissance and surveillance on China and its activities in the East China Sea.

How far Japan’s Diet would be willing to go in developing counterstrike and precision weapons for now is an unanswered question. Asei Ito, associate professor of social science at the University of Tokyo, said in the past national opinion was opposed “to this thinking.” But China’s aggressive behavior in the East China Sea, where the two nations have conflicting territorial claims, and its claims of sovereignty over much of the South China are causing many Japanese to be warier of Beijing’s ambitions.

“China no longer sees Japan as a competitor” as the dominant economic and military power in the Indo-Pacific, Ichiro Inoue, professor of policy studies at Kwansei Gakunin University, said. He cited China’s gross domestic product at three times that of Japan’s as an example.

Geographically, “Japan is located in the forefront of the rise of China.” A rising China is now a fact of life for other nations like those in Southeast Asia, India, South Korea and even Europe as it expands economic clout through its Belt and Road infrastructure initiative.

Rather than pursuing an ideological course like the Soviet Union, “Xi Jinping’s China is becoming more nationalistic,” pursuing a much harder line on reining in democratic activists in Hong Kong and threatening Taiwan.

But its definition of sovereign Chinese territory is broad – to include the Senkakus, uninhabited islands controlled by Japan since 1895 – and the so-called “nine-dash line” in the South China Sea.

In a pre-recorded segment, Rumi Aoyama, professor at the graduate school of Asia-Pacific Studies at Waseda University, said “Japan faces the need to defend its territory” against an expansionist China. She urged more cooperation on defense matters with Washington and through “the Quad,” the informal security relationship among the United States, Japan, India and Australia.

This is the view of China as a security competitor, but its relationships with Japan are more complicated than defenses.

Beijing is Tokyo’s largest trading partner and it also is a key source in its own manufacturing supply chain, so cooperation is also necessary.

Aoyama stressed that the Japanese public also supports an economic engagement policy with China, but one based upon “a high standard” that recognizes the rule of law and the importance Tokyo attaches to a “free and open Indo-Pacific” trading region.

While the Biden administration has not committed itself to join the Comprehensive and Progressive Trans-Pacific Partnership, she said China is and that would require its acceptance of the partnership’s rules.

“We’re waiting for the United States to come back,” Ito said. He was referring to the 2017 Trump administration decision to pull out of negotiations over the Trans-Pacific partnership.

That has played well regionally.

The call for free and open trade has allowed Tokyo to build trust among Southeast Asian nations as a trading partner.

Despite these steps by Japan, the United States, its allies and partners in the region, Inoue offered a cautionary note.

“China will not change its course in the near future” of asserting what it considers its rights.