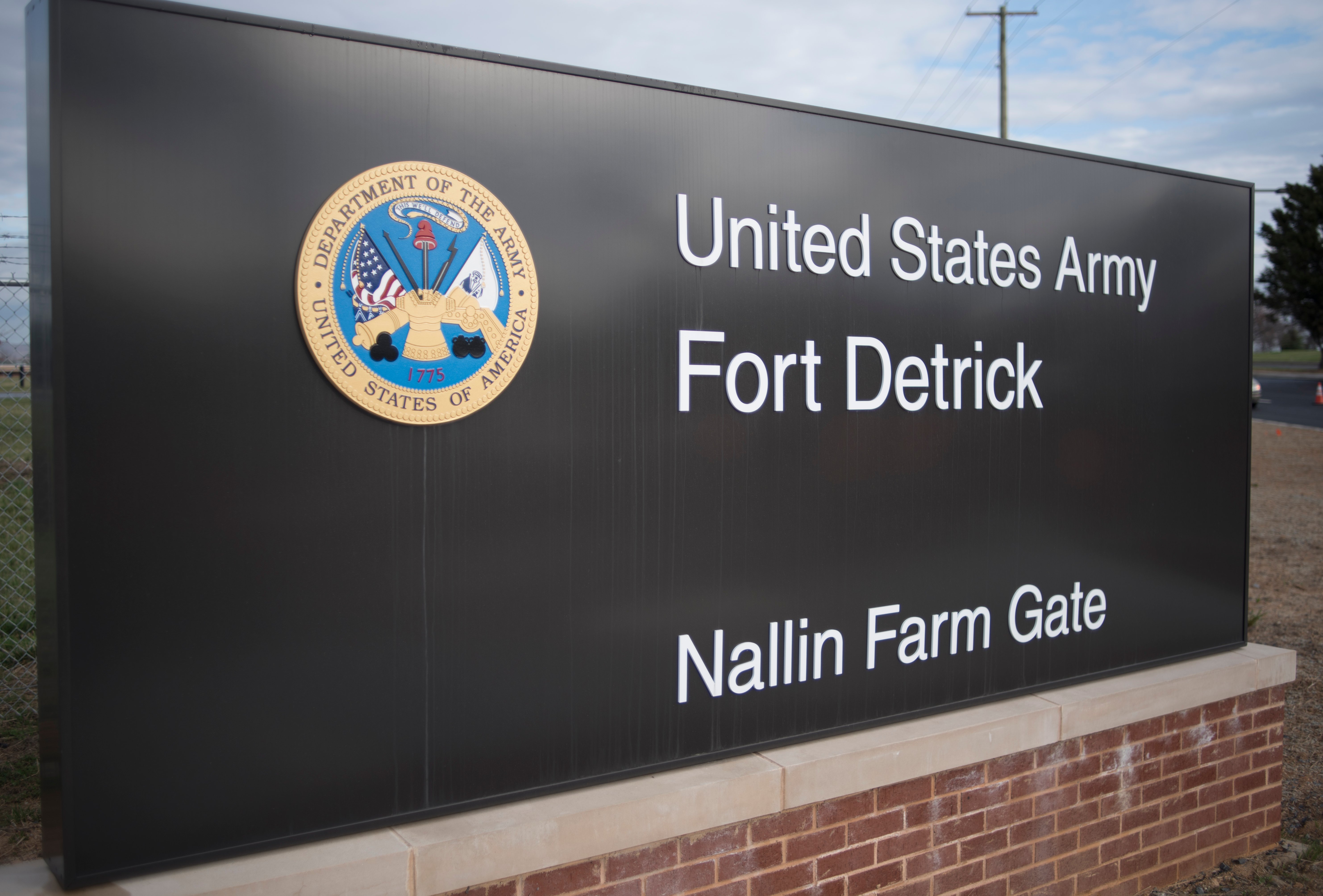 Fort Detrick officials opened the new Nallin Farm Gate to the workforce and public on April 10, 2015. US Army photo.

An active-duty sailor shot two Navy personnel today in Frederick, Md., before driving to a nearby Army installation and being killed by security there, Navy and local police officials said.

Police and military officials said Hospital Corpsman 3rd Class Fantahun Girma Woldesenbet shot two Navy personnel at 8:20 a.m. inside a building in the Riverside Technology Park, though they did not comment during anfort afternoon news conference on any motive or speculate whether Woldesenbet knew the victims personally.

Woldesenbet then drove to Fort Detrick. By the time he got there at about 8:45 a.m., the Frederick Police Department had already put out a BOLO, or be on the lookout, report for Woldesenbet and his vehicle. Fort Detrick gate security tried to stop him, but he drove through the gate, said Army Brig. Gen. Michael Talley, the commanding general of U.S. Army Medical Research and Development Command, the lead command at Fort Detrick.

Talley said at the news conference that Woldesenbet was stopped by Fort Detrick’s quick reaction force in a parking lot on the installation about a half mile from the gate. When he brandished a weapon, officers shot him. They attempted lifesaving measures for about 20 minutes before declaring Woldesenbet dead on the scene, Talley said.

Woldesenbet was 38 and lived in the city of Frederick, Frederick Police Chief Jason Lando said.

The Navy announced this afternoon that Woldesenbet was from Virginia and enlisted in September 2012. After his initial training, he attended training to become a hospital corpsman at Fort Sam Houston in San Antonio, Texas, and at Marine Corps Base Camp Lejeune, N.C. He spent two years working at Navy Medicine Readiness and Training Command in Corpus Christi, Texas, from 2013 to 2015, and from 2015 to 2018 he worked at Navy Medicine Readiness and Training Command in Bremerton, Wash. After additional training, he began working at Naval Medical Research Center in Frederick in August 2019.

Little information has been released about the victims and whether they worked with or knew Woldesenbet.

The shooting occurred at a space near the Army garrison used by the Navy for storage, U.S. Navy Bureau of Medicine and Surgery (BUMED) spokesman Cmdr. Denver Applehans told USNI News.

“The facility at 8415 Progress Drive, Frederick, Md., is a warehouse used by Naval Medical Research Center, Biological Defense Research Directorate to store research supplies and equipment, such as [personal protective equipment], cold shipping boxes, pipette tips and biosafety cabinets. The warehouse does not have office space and is not staffed on a regular basis and only houses our overflow supplies. The warehouse is a contractor leased facility,” he said.

Woldesenbet was assigned to Naval Medical Research Center, but Lando and Talley would not confirm whether he was supposed to be at the warehouse this morning for work or not.

Lando said during the news conference that the victims, both adult males, were flown to the R. Adams Cowley Shock Trauma Center in Baltimore in critical condition. One remains in critical condition, he said, and the other is being treated and is expected to be released from the hospital tomorrow.

Because of the small number of Navy personnel that work at the Army installation, Lando and Talley would not release any information about what command the victims worked for, aside fro confirming they were Navy personnel.

Talley also declined to say whether Woldesenbet was in uniform when the shooting took place.

The warehouse where the shooting happened is at the Riverside Technology Park off Monocacy Blvd. in Frederick. Fort Detrick has grown rapidly in the past two decades due in part to the 2005 base realignment and closure process that helped turn the Frederick Army installation into an interagency medical research center. Many of the defense and non-defense tenants have a presence both on the installation and offsite in nearby office parks.

Among the installation’s tenants are several military medical research and logistics commands, including the Navy Medical Logistics Command, as well as an Army health clinic and a veterans affairs health clinic.

In a post on Facebook this morning, the Fort Detrick U.S. Army Garrison wrote, “Fort Detrick Police have neutralized an active shooter situation involving an armed gunman. After a shooting incident off post, the suspect breached the Nalin Pond gate located off of Opposumtown Pike. The gunman was neutralized, and medical lifesaving procedures were initiated. The gunman was pronounced dead at the scene.”

Lando made clear that there was no ongoing threat to the community but said a lot of questions remained unanswered, including the relationship between the shooter and the victims, any motive for the shooting, and why the shooter would drive to Fort Detrick after the shootings.

The Fort Detrick Facebook post adds that “Fort Detrick and local law enforcement are continuing to investigate this incident.”

“Our number one priority is the safety of our people,” U.S. Army Garrison Fort Detrick Commander Col. Dexter Nunnally said in the statement. “Our emergency responders are well trained for these types of situations and the fast response of our military police enabled us to contain this threat quickly.”