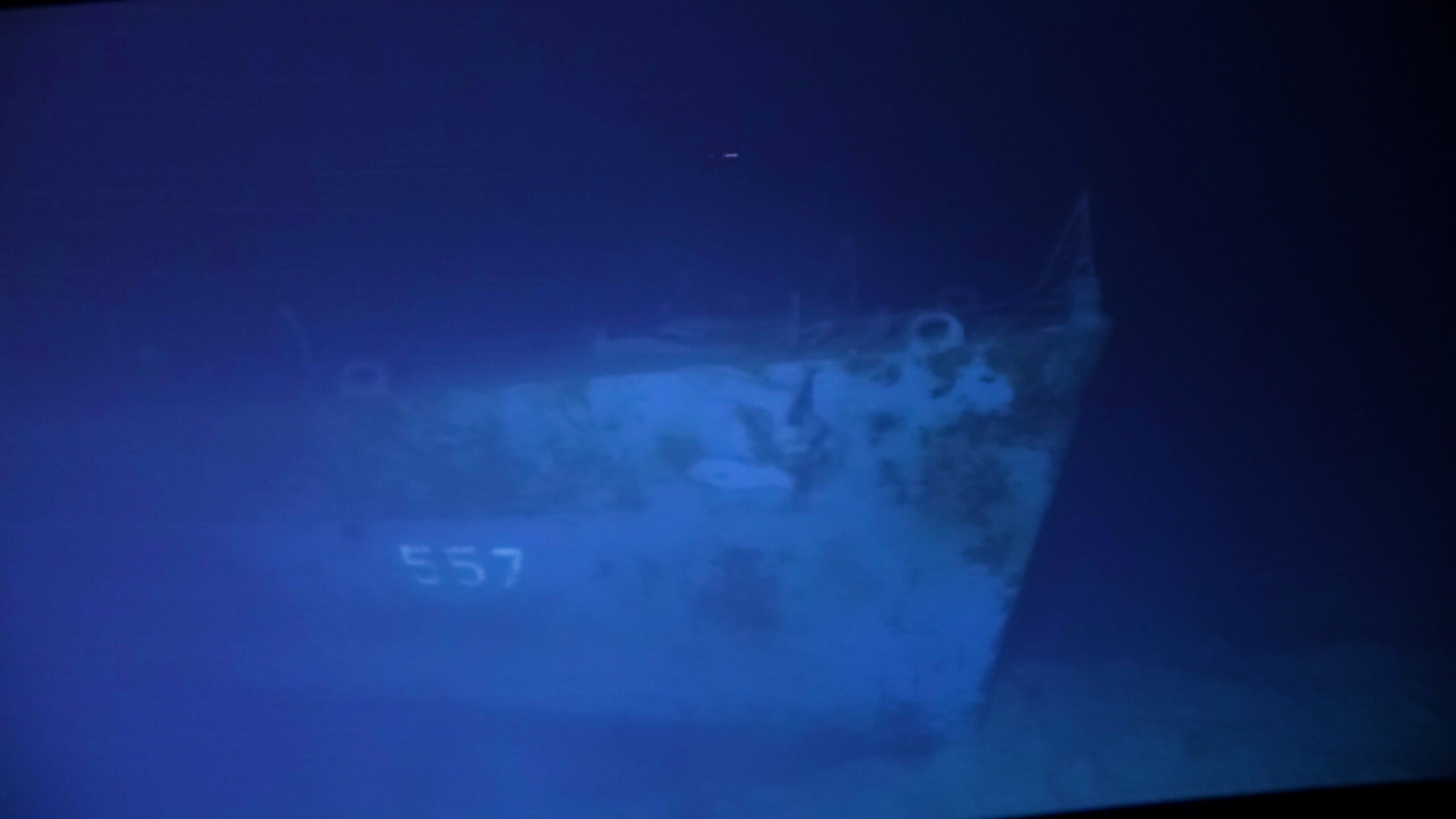 This story had been updated to clarify that Cmdr. Ernest Evans was one of two destroyer commanders to receive the Medal of Honor for actions during World War II.

A team of ocean explorers has found the wreck of World War II Fletcher-class destroyer USS Johnston (DD-557) which played a critical role at the Battle off Samar, Navy History and Heritage Command said on Thursday.

Victor Vescovo, explorer and retired Navy officer, in the manned submersible Limiting Factor located Johnston‘s bow further down a cliff face at 21,180 feet. He said he is committed to respecting the final resting place for many of its crew, but will provide the Navy with all sonar data, imagery and field notes from his expedition.

Johnston was lost on Oct. 25, 1944, after it “charged into a massive line of Japanese warships in order to protect the American landing force” in Gen. Douglas MacArthur’s invasion of the Philippines, according to the Navy.

“The image is impressive, and we look forward to seeing the rest of the data collected during the expedition because the story of Johnston and her crew is a perfect example for modern sailors of the honor, courage, commitment, and valor of their predecessors,” Cox said.

The wreckage of an unidentified Fletcher-class destroyer was first discovered in October 2019 on the edge of an undersea cliff at a depth of more than 20,000 feet by a research vessel owned by Vulcan Inc. NHHC told Vulcan based on location the wreckage could be either USS Hoel (DD-533) or Johnston.

At a 75th anniversary conference of the Battle of Leyte Gulf in 2019, the actions of Cmdr. Ernest Evans, Johnston‘s skipper, were singled out as critically important to American naval success that day and in the larger Battle of Leyte Gulf because he and the crew were ready to go when circumstances changed.

“The essence of naval leadership was Ernest Evans,” said retired Capt. David Kennedy, screenplay writer for the film Taffy 3, based on the Battle at Samar.

Evans, a Naval Academy graduate and a native American from Oklahoma “very systematically built a team” that was capable of moving to action even when “they’re not expected to fight,” Kennedy said. Evans’ approach to building a team was apparent when “they attacked with ferocity” against formidable Japanese odds. Evans was posthumously awarded the Medal of Honor. He was one of two destroyer commanders in World War II to receive that recognition.

Cox called the actions of the commanders and crews of the three destroyers, four destroyer escorts and the pilots and aircrewmen flying off small escort carriers on Oct. 25 to stop a large Japanese battle force examples of “sheer, raw courage.” 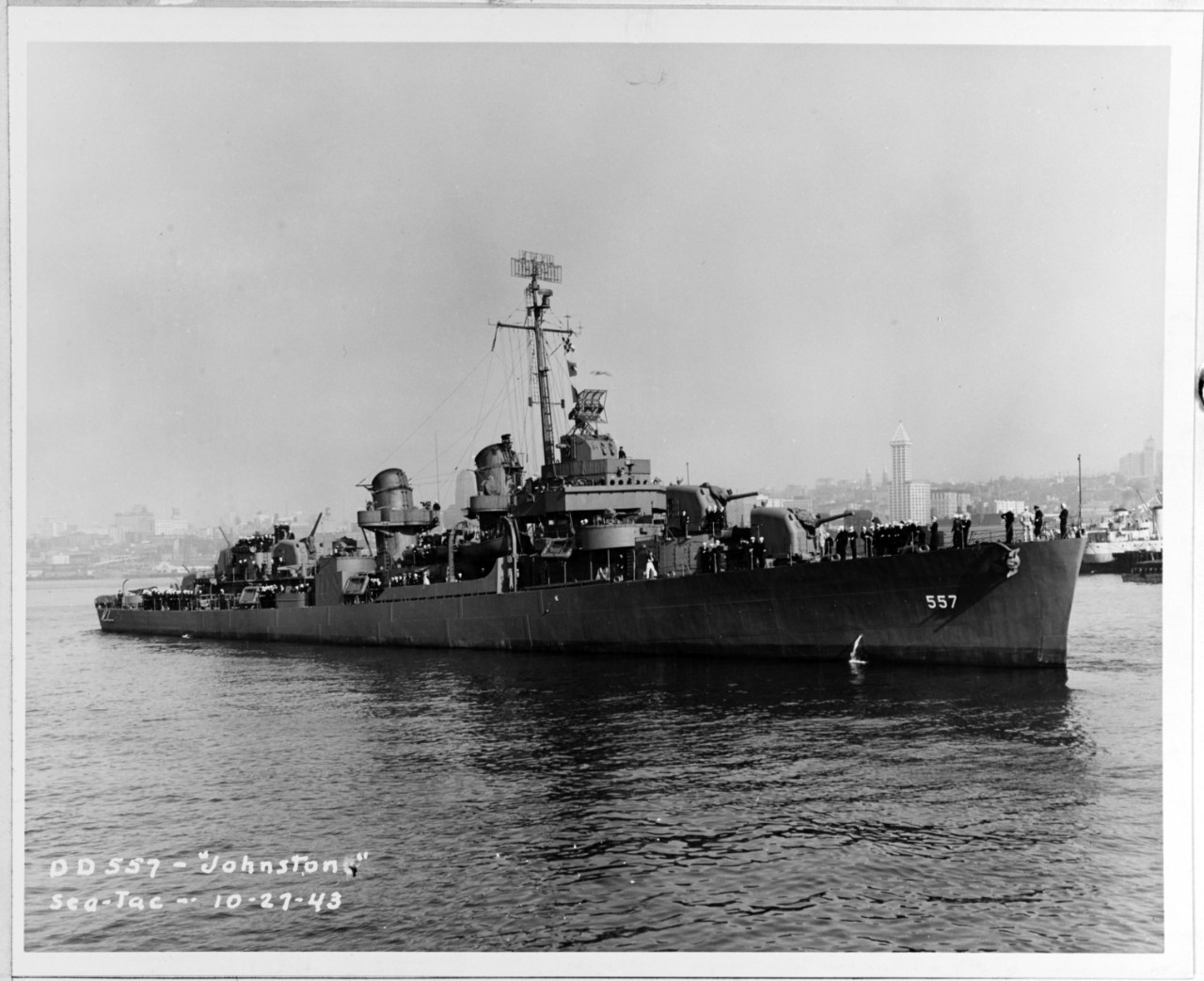 Johnston hit a heavy cruiser in its first run at the Japanese, but it suffered widespread damage and casualties in the attack. Evans himself was gravely wounded. Despite being without torpedoes, its firepower reduced and slowed by Japanese shells, Evans ordered a second attack, “firing 30 rounds into a 30,000-ton Japanese battleship,” according to NHHC.

The command described the fighting this way:

“Noticing the Japanese ships were targeting escort carrier Gambier Bay (CVE-73), Evans gave the order to ‘commence firing on that cruiser, draw her fire on us and away from Gambier Bay.’ One by one, Johnston took on Japanese destroyers, although Johnston had no torpedoes and limited firepower. After two-and-ahalf hours, Johnston—dead in the water—was surrounded by enemy ships.

At 9:45 a.m., Evans gave the order to abandon ship. Twenty-five minutes later, the destroyer rolled over and began to sink. Of the crew of 327, only 141 survived.”

The release noted that at the conclusion of the expedition, the Caladan Oceanic team brought their surface vessel DSSV Pressure Drop to a stop in the vicinity of the battle, sounded the ship’s whistle, and laid a wreath in honor of the lives lost there.

Vescovo is funding the work privately and pro-bono to the Navy. His reputation as an oceanic explorer comes from his Five Deeps expeditions that went to the greatest depths in all five oceans and ended in 2020.